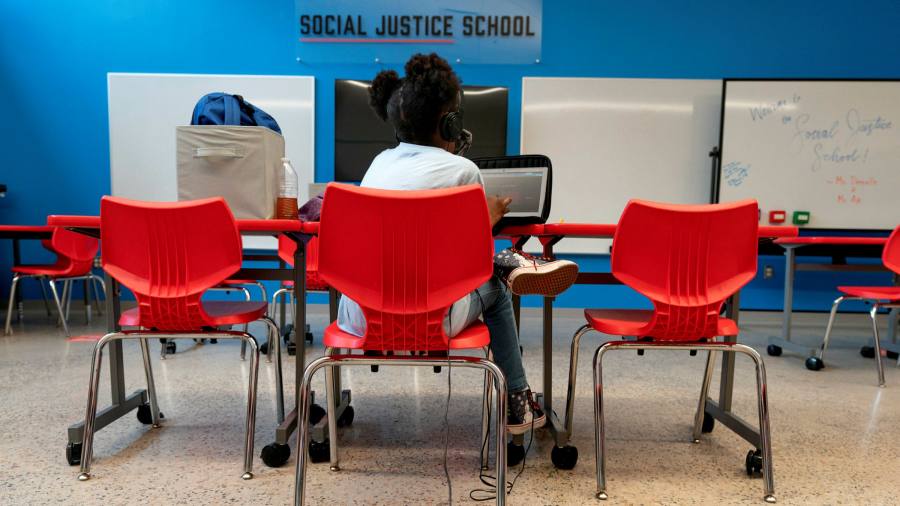 
Washington DC classrooms are filling up with children again – except there are no teachers. As part of this unusual arrangement, students are supervised by non-teaching, non-union staff and learn with iPads at their desks.

Few people agree on who is to blame. Randi Weingarten, president of the American Federation of Teachers, the national union of teachers, says the Washington city government is responsible, insisting that staff will return as long as they stay on a voluntary basis. State officials criticize Donald Trump’s administration for not stopping the pandemic.

“DC is a mess,” Ms. Weingarten said. “But it doesn’t have to be like that – it’s very frustrating.”

The stalemate is symptomatic of a wider reluctance in the United States to reopen schools, just as European countries appear to have overcome it. This autumn, schools reopened in most of Europe. Many governments initially did this primarily to help parents get back to work and boost their economies. They are also concerned about the lag in educational attainment, especially for younger students. But since then, they’ve been backed by a growing body of evidence suggesting that children are less likely to spread the disease and that reopening schools has had little impact on epidemics.

The restart of schools in Norway and Denmark, which have taken the leap earlier than most countries, does not appear to have resulted in a new outbreak of Covid-19. The rest of Europe has since followed suit. In the UK, France, Germany, Spain and most of the continent, the reopening has not had any noticeable impact on the pandemic.

In England, for example, outbreaks have occurred in just four in 100 primary schools after they opened, although in 22 out of 100 secondary schools, according to The data health authorities. Other scientific data from other parts of the world shows that the younger the children, the less likely they are to spread the virus.

Out of 94 countries who reopened their schools in the fall, 88 avoided further nationwide closures through strengthened health measures such as compulsory masks on school premises and social distancing in classrooms, according to Insights for Education, a global education think tank.

Israel was a notable exception: cases more than doubled in the 50 days after schools reopened in late May, with many cases linked to children aged 10-19. Scientists struggle to explain why, but some blamed blazing temperatures that have prompted students and teachers to abandon their masks.

In the United States, some Republican-led states, including North Dakota, have reopened their schools after summer recess, often under pressure from the Trump administration. Four months later, local officials are surprised at how well they have been able to save classrooms from the pandemic, even in the form of infections spread rapidly in the community.

“We haven’t had massive absences due to infected students who are forced out of school,” said Terry Brenner, principal of public schools in Grand Forks, North Dakota.

He estimates that 15% of students have either been infected or have come into contact with another infected student. But under the direction of the local health department, most of the exposed students who did not develop symptoms were able to continue attending classes, wearing a mask and avoiding activities such as playing an instrument or making physical exercise.

Mr Brenner’s district was recently forced to shut down its school system again for 17 days just because many staff were catching the disease outside of school.

Only 0.02% of students and 0.04% of staff tested positive in schools that have reopened in the United States, according to Emily Oster, an economist at Brown University who was collect data.

Infection rates have been lower than for the community as a whole, with peaks following those of the general population – suggesting schools are not the cause. So-called super-spread events, a cluster of five or more cases in one school, were recorded in less than 5 percent of schools, a proportion similar to what was seen in the UK.

Missing school means lower life skills and lower life chances. And this is the most concentrated among those who can least afford to miss it.

Yet resistance to reopening schools is still strong in many parts of the United States. In New York, schools closed again on November 16 less than two months after reopening, a decision that has been overturned after Mayor Bill de Blasio relaxed the criteria for closure. In California, 51 out of 58 counties are now in the “purple” zone, which means they can’t reopen if they weren’t already open.

Ms Oster said the highly politicized atmosphere in the United States was not helping: “Many schools in more liberal areas were considering reopening, but by the time they were about to do so, the president [Donald Trump] told them they had to do it. And so a lot of these people turned around and said “F-you”.

As their European counterparts did a few months ago, American unions insist that it remains unsafe for teachers to work. Ms Weingarten said: “If you tackle the spread of the community and take the right guarantees, children – especially younger ones – will not pass the virus on in schools.”

Meanwhile, children’s education suffers. According to the American educational research organization NWEA, students aged 8 to 13 scored an average 5 to 10 percentage points less on math tests this year than those who took the test last year. Early data seemed to suggest that the disparities were even worse for minority students and those attending schools with high poverty rates.

More teachers in the United States are expected to follow their European colleagues over the next few months, as vaccines are launched. But the damage may have already been done. “A missed school means lower life skills and lower life chances,” said Simon Burgess, education researcher at the University of Bristol in England. “And this is the most concentrated among those who can least afford to miss it.”