Macron pledges to maintain defense ties with the Egyptian regime 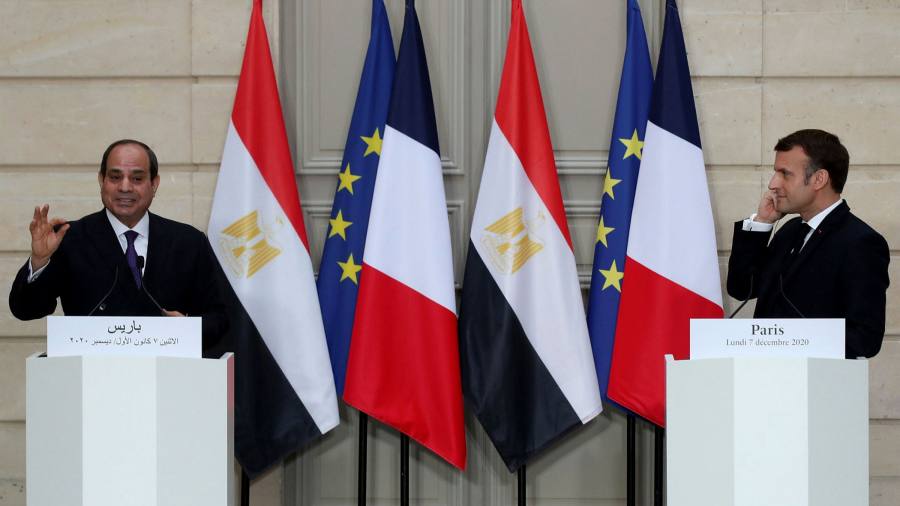 
President Emmanuel Macron said on Monday that France would maintain defense and trade links with Egypt despite the army-led regime. human rights record because cooperation would contribute to the fight against terrorism and contribute to regional stability.

Mr Macron was speaking after welcoming Egyptian President Abdel Fattah al-Sisi for talks at the Elysee Palace, in defiance of harsh criticism from international human rights groups as well as liberal and left-wing French politicians .

“I will not condition our cooperation in defense and economy on these disagreements [over human rights]”Said Mr. Macron at a joint press conference.

“It is better to have a demanding dialogue than a boycott policy that would reduce the effectiveness of one of our partners in the fight against terrorism. . . he [a boycott] would be ineffective for human rights and counterproductive for terrorism. “

French officials said Paris would maintain its “strategic partnership” with Egypt not only because of terrorism, but also because the two countries have common interests in Libya and the Eastern Mediterranean, where they are opposed to a Turkey. increasingly aggressive under President Recep Tayyip Erdogan.

Egyptian prosecutors on Friday ordered the release from detention of three staff members of the Egyptian Initiative for Personal Rights, a rights group and among the last such organizations still active despite the crackdown on groups. Civil society.

They were arrested in November and their release followed an international outcry with the UN, the EU and Joe Biden’s new US administration calling for their freedom.

Mr Sisi dodged a question about the number of political prisoners in Egypt, dismissing the idea that he was a fierce bully. “I am responsible for protecting 100 million people,” he said. “We are a nation trying to create a bright future for its citizens in a very unstable region.”

The activists said the arrests of the three activists were linked to a meeting they organized at their Cairo offices for 13 Western diplomats, including the French ambassador. The French Foreign Ministry issued a statement expressing concern over the detention of the first staff member, prompting a reprimand from Cairo.

Despite the release of the three EIPR workers, a counterterrorism court on Sunday froze their assets and bank accounts. The prosecution had accused them of joining a terrorist organization and spreading false news.

A fourth EIPR staff member, Patrick Zaki, has been detained since February and faces charges that include spreading fake news and inciting protests. On Monday, a court renewed his detention for an additional 45 days.

Egypt has bought billions of dollars in fighter jets and warships from France since Mr Sisi came to power in 2013 in a popular-backed coup in which he ousted his elected Islamist predecessor.

Mr. Sissi presided over one of the toughest crackdowns on dissent in modern Egyptian history. Tens of thousands of Islamists have been arrested and the detentions have also extended to secular critics of the regime, journalists, human rights lawyers and democracy activists.

Many face vague accusations that include membership in an unspecified terrorist organization or the “sharing of objectives” of a terrorist group. Rights activists are also concerned about the use of lengthy pre-trial detention, which can extend for years as a form of punishment for peaceful dissidents.

Concerned about Islamist terrorism, migration and the disintegration of Libya, the West has largely stood aside and has spoken little in public about the crushing of dissent and civil society in Egypt. President Donald Trump described Mr. Sissi as “my favorite dictator” and the two appeared to have a good relationship.