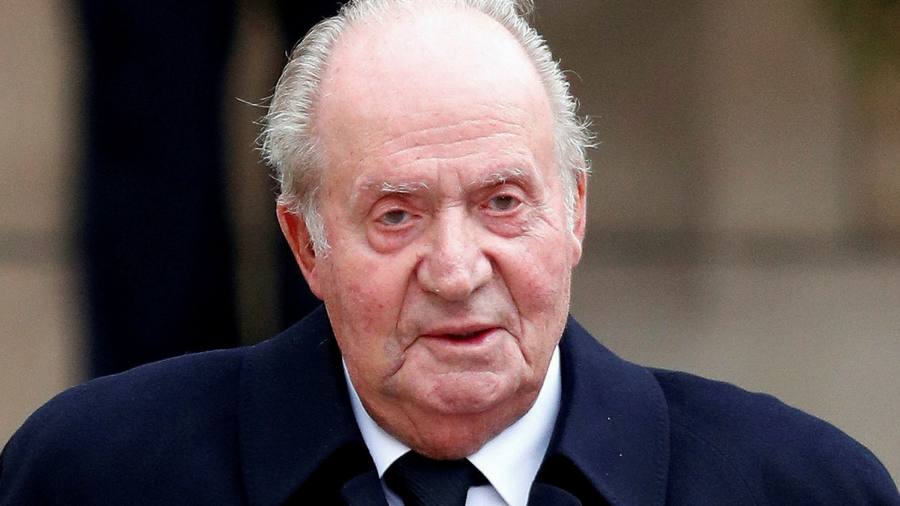 
Juan Carlos, Spain old king, paid more than half a million euros to try to sort out his tax and legal problems four months after leaving the country amid a growing scandal.

Javier Sánchez-Junco, lawyer for the former monarch, said the declaration and payment to the “competent tax authorities” of € 678,393.72 was on Juan Carlos’ own initiative and cleared his tax debt, including interest and surcharges.

“His Majesty King Juan Carlos remains, as always, at the disposal of the prosecution for any procedure or action he deems appropriate,” added Mr. Sánchez-Junco.

Wednesday’s announcement comes after a year in which controversy has grown around the former king, who abdicated in 2014, even as the monarchy was sucked deeper into the highly polarized politics of the Spain.

Corinna zu Sayn-Wittgenstein, a former lover of the former king, said in March he gave her € 65million in 2012 – money from a $ 100million gift to Juan Carlos of the late King Abdullah of Saudi Arabia.

Soon after, King Felipe VI, reigning monarch of Spain and son of Juan Carlos, renounced all inheritance from the former king and removed his father from the payroll of the royal household.

Judicial authorities revealed in July that prosecutors at the country’s Supreme Court were investigate Juan Carlos for alleged payments for a € 7 billion high-speed train project between the holy cities of Mecca and Medina which was awarded to a Spanish consortium in 2011.

In August, Juan Carlos moved into the seven-star Emirates Palace hotel in Abu Dhabi after announce that “guided by the conviction of rendering the best service” to the institutions and the population of the country, he had decided “to move, at that time, outside Spain”.

After reports that Juan Carlos had used credit cards paid by a third party, the prosecution revealed in November, the existence of a separate investigation into the former king and said she had alerted the country’s tax inspectorate and the data protection commissioner of a possible leak.

If such an investigation involved events after the abdication of the former king in 2014, it might have greater legal significance than the investigation into the 2011 rail contract, as as reigning monarch Juan Carlos benefited from constitutional protection from prosecution.

In theory, Juan Carlos could be tried by the Supreme Court for actions after 2014. But, under Spanish law, a person cannot be prosecuted for tax offenses if they settle an outstanding debt – like the lawyer de Juan Carlos says it now – before formal accusations are made.

Spanish media have reported in recent days that the former king has told friends of his desire to return to the country for Christmas. But Juan Carlos, long celebrated for his role in leading Spain to democracy in the 1970s and for opposing an attempted coup in 1981, is now a controversial figure.

Even before Wednesday’s announcement, Pablo Echenique, parliamentary spokesperson for Podemos, the junior partner of the ruling coalition in Spain, said Juan Carlos’ tax return amounted to an “admission” he had ” defrauded the Ministry of the Budget ”.

Government ministers have been more discreet. “You can perfectly imagine [what I think] if I tell you that we are equal before the law and, in particular, those of us who have public responsibilities, ”said María Jesús Montero, Budget Minister, on Wednesday.

The role of the monarchy has become politically charged at a time when Spain’s left-wing government is preserved in power by the Basque and Catalan separatist parties – to the fury of the right.

Last month 73 retired army officers wrote a letter to Felipe VI attacking the “socialist-communist government” and pledging their loyalty to the king “in these difficult times for the homeland”.

On Wednesday evening, Pedro Sánchez, Spain’s prime minister, said it was important to uphold the former king’s presumption of innocence. “Democracy works, the media report what is happening, the justice system works, the tax system works, without any kind of interference,” he added. “The monarchy is not in danger.”

The Royal Palace did not respond to a request for comment.