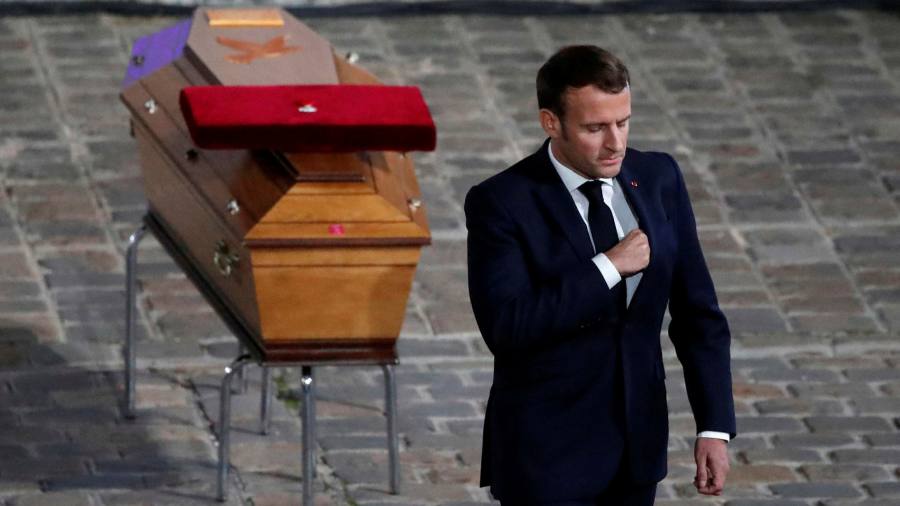 
On Wednesday, on the occasion of the 115th anniversary of the French law of 1905 separating Church and State, President Emmanuel Macron will unveil a new bill intended to curb Islamist “Separatism” on French soil.

Mr Macron will present the bill – titled the law to “protect Republican principles” – at a cabinet meeting on Wednesday. It comes as his ruling party remains shaken by his go down on another security law that would have restricted the use of images identifying police officers. Section 24 of this law is being rewritten after protests that it violated freedom of expression and after three police officers were filmed beating a black music producer.

The bill includes an extension of the principle of “neutrality” in public services – which prohibits civil servants from wearing ostentatious religious symbols, for example – to private sector companies if they are hired by the authorities. State subsidies to civic associations will be further reduced if they are deemed hostile to the republic.

Greater restrictions will be placed on hate speech and radical content on social media and the Internet at large, and it will be illegal to identify officials such as teachers for the purpose of harming them. This echoes the now theoretical article on targeting police officers in the other security law, and also a reaction to the fact that Samuel Paty, the schoolteacher beheaded by an Islamist born in Chechnya in October, was vilified and identified on Facebook, while his attacker claimed responsibility on Twitter afterwards.

Mr Macron insisted his aim was to target Islamist extremists, rejecting accusations of Islamophobia by Recep Tayyip Erdogan of Turkey and Imran Khan of Pakistan.

“We are not targeting Muslims,” ​​said one of Mr. Macron’s advisers. “We are targeting movements which, in the name of religion, have a discourse against the republic.”

The government’s strategy, he said, was a “destabilization” of the radical Islamist networks which he said dominate certain districts of France – 15 of which were targeted by the government nearly three years ago for a ” Republican reconquest ”.

Despite unease among liberals over other provisions of the bill – an effective ban on home schooling, for example, and a criminalization of patients who ask to choose the sex of the doctor who treats them in public hospitals – the repression of Mr. Macron against Islamism since he took office in 2017 is supported by a majority of French voters.

According to an Ifop-Fiducial opinion poll conducted by CNews and Sud Radio in October, 87% of French people agree that the distinctive shape of France secularism, or secularism, is in danger. Seventy-nine percent agree that “Islamism has declared war on France and the republic,” and 78 percent support teachers like Samuel Paty who show their students caricatures of themselves. make fun of religions to explain freedom of expression and the right to blasphemy.

Action against Islamism and support for secularism are popular across the political spectrum. The poll showed that 88% of Socialists supported the use of religious cartoons in schools, compared to 89% of supporters of Marine Le Pen’s far-right National Rally.

In its 54 articles, the law will extend the application of secularism in various areas of life. Home schooling will be restricted, officials say, as some children are in fact sent by their parents to unregistered Koranic classes.

Marc Trévidic, former prosecutor and anti-terrorism judge, estimated that 3,000 to 4,000 young French people – double the official number – had gone to fight as jihadists in Syria and Iraq after 2013. “We were stunned by the number of departures, ”he told the Financial Times.

Mr Macron pledged a parallel effort to deal with complaints of discrimination and to fund government services in deprived areas.

The law will not resolve a wider reluctance to accept public display of religious faith, said Tareq Oubrou, a Moroccan-born imam in Bordeaux. “There is visibility [of French Muslims] this is seen as a stubborn separatism, as a plan for the Islamization of society, ”he said, recalling that the law of 1905 was aimed at limiting the powers of the monarchist Catholic Church.

“Every religious practice is seen as a turning point towards sectarianism leading to fundamentalism,” he said. “It’s not like in Anglo-Saxon countries. . . Here in France, freedom is first and foremost the freedom to free oneself of religion.”