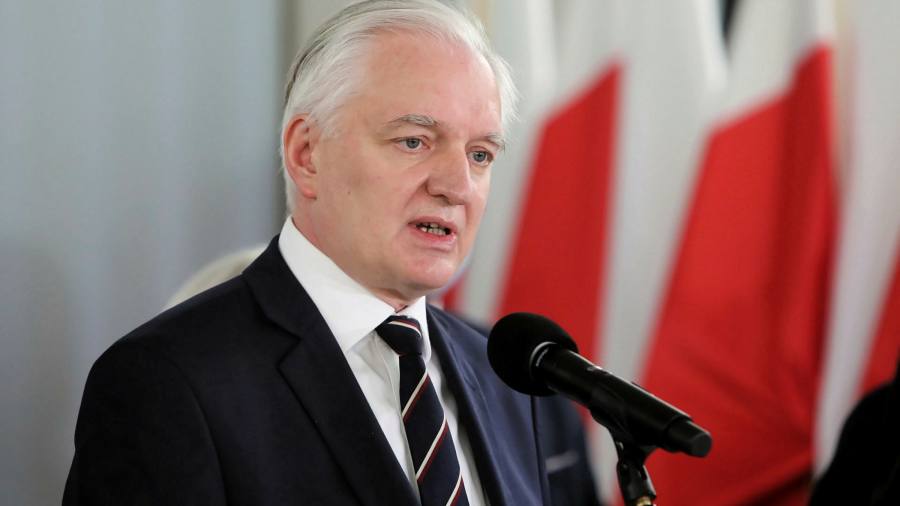 
The Polish Deputy Prime Minister said the EU was on the verge of ending a dead end on its budget of 1.8 billion euros and its recovery fund after negotiators proposed a settlement on the new contentious mechanism linking payments to the principles of the rule of law.

Jaroslaw Gowin told reporters that an agreement was close at hand between his country, Hungary and the German EU Presidency on the dispute, which pitted Warsaw and Budapest against other European capitals.

However, diplomats stressed that if progress is made, the deal still needs to be formally confirmed by the Hungarian and Polish governments. It must also be acceptable to all other EU Member States and the European Parliament.

Mr Gowin, who heads a junior party in the ruling coalition in Poland, is one of the main moderate voices in the Polish government, which has been deeply divided over how to run the rule of law mechanism.

“A good agreement is very possible; as [Hungarian prime minister Viktor] Orban said that we are literally one centimeter away from finding a good compromise, ”Gowin said Wednesday morning, according to Polish television channel TVN24. He said that there was now an agreement between the German Presidency, Warsaw and Budapest and that “I believe that this agreement will also cover the 24 other European capitals”.

If the announcement is confirmed, it would be a significant breakthrough as member states plan for an EU summit that risks being overshadowed by the budget stalemate as well as ongoing EU-UK trade talks. An EU diplomat said: “We are awaiting final confirmation.”

Warsaw and Budapest have both opposed a new mechanism that would tie money payments from the EU to compliance with key EU legal principles, arguing that it unfairly targets their nations.

EU diplomats say negotiators are drafting an “interpretative declaration” for the two countries in an attempt to provide assurances on the rule of law mechanism, while not changing the terms of the legal deal. concluded by MPs and governments.

The statement would make it clear that the mechanism would apply to the next EU budget from 2021 – and not to existing funds. This has been a long-standing claim of Hungarian Prime Minister Viktor Orban.

Diplomats said the statement would also reaffirm that a single country could trigger an “emergency brake” on the sanctions process and ensure that the dispute is taken up by EU leaders. This element was part of the July agreement reached by the member states.

The statement would also state that the final arbiter for the enforcement of sanctions will be the European Court of Justice – reflecting complaints from Poland and Hungary that the mechanism violates the EU treaty.

As Orban said, we are literally one centimeter away from finding a good compromise

Mr Gowin’s comments come after Mr Orban flew to Warsaw on Tuesday evening to meet with the leader of the ruling Law and Justice Party and Poland’s de facto leader Jaroslaw Kaczynski, as well as ‘with Prime Minister Mateusz Morawiecki, and the two leaders of Law and Justice. junior coalition partners, Mr. Gowin and Zbigniew Ziobro.

After the meeting, Mr Orban’s optimistic tone on the likelihood of a deal was echoed by Polish government spokesman Piotr Muller, who said after the meeting that Polish leaders were “optimistic” about the chances of a deal. ‘a deal.

“We are convinced that there is a chance at this meeting of the European Council – I want this to be clear – to reach an agreement,” he said. “But by the nature of things, for a compromise, the agreement of both parties is necessary.”

A delay in activating the rule of law mechanism could be particularly important for Mr Orban ahead of the legislative elections scheduled for 2022. Critics say the authoritarian prime minister, who took power for the second time in 2010 , wishes to avoid any potential impact of the new EU system until the end of these elections.

However, significant tensions persist within the ruling Polish camp over how to proceed. An EU official said there was a delay in accepting the declaration on Wednesday as Poland tried to mend a rift in government.

Ziobro’s right-wing Poland United Party has repeatedly insisted that accepting any rule of law mechanism would be a betrayal of Poland’s national interest.

He said last month that failure to veto would result in a complete loss of confidence in Mr Morawiecki, prompting speculation that Mr Ziobro’s party could quit government if Poland abandoned its veto. . This would deprive the ruling coalition of its majority.

Ziobro’s allies echoed this sweeping message after Tuesday night’s meeting. “We are dealing with liars and cheaters – in Brussels and Berlin. Therefore, the only solution for Poland and Europe is a veto. The law is hard, but the law – no political declaration can replace laws, ”Janusz Kowalski of United Poland told the Financial Times.

“We cannot accept the German project on the rule of law mechanism,” he said.