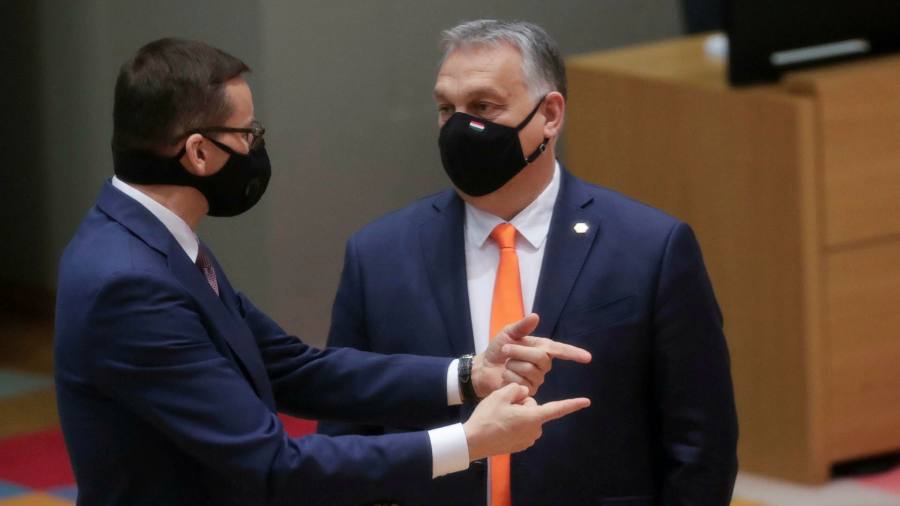 
Hungary and Poland said EU countries close to a deal to end a damaging conflict over plans to tie the bloc’s € 1.8 billion budget and post-pandemic recovery program to upholding the rule of law.

Hungarian Prime Minister Viktor Orban said member states were “just an inch away from reaching consensus” on a deal that would release much-needed funds and end the veto threat from Budapest and Warsaw.

“I think we are very, very close to [reaching] a good deal for the unity of the European Union, ”he told reporters on Thursday.

Mateusz Morawiecki, Prime Minister of Poland, said EU leaders had “drawn conclusions” which were “a precondition for moving the process forward”.

Angela Merkel, German Chancellor, said that the finalization of the deal and the release of funds would be “a very important sign for the ability of the European Union to act”. Germany holds the rotating EU presidency and has taken the lead in negotiating the proposed compromise with Poland and Hungary.

The leaders’ comments came as they arrived at an EU summit in Brussels that was overshadowed by the threat to the historic economic package agreed by the bloc in July. The dispute has exposed a growing crisis over what critics see as a slide towards authoritarianism in Hungary, Poland and some other member states.

On Wednesday, EU negotiators drafted a four-page “interpretative statement” to break the budgetary deadlock on the plan to cut the bloc’s cash payments to countries that violate the rule of law. The text is designed to give assurances to Poland and Hungary that the rule of law mechanism will only apply to the next EU budget – from 2021. It also gives a role to the European Court of Justice to rule on the legality of the tool, if it is challenged by a Member State in court before it is even used.

The ECJ is expected to deliver its judgment before the European Commission drafts guidelines on how to trigger the mechanism – a requirement that would likely delay any sanctions process. The question of when measures to cut budget funds can take effect is an important one for Mr Orban, who faces national elections in 2022.

Mr Morawiecki warned that there had to be a ‘dividing line’ between EU budget anti-fraud checks and broader rule of law regulations, in order to prevent ‘politically motivated’ attacks against Member States. Warsaw’s dispute with Brussels revolves around its radical overhaul of the justice system, rather than allegations of corruption.

Supporters of the rule of law compromise plan insisted that the EU had not capitulated to the Warsaw and Budapest demands, as the proposed underlying mechanism remained unchanged. Ursula von der Leyen, chairman of the committee, said it was “crucial”.

But critics such as Guy Verhofstadt, a Belgian MEP and former prime minister, say the proposed deal violates the EU treaty by restricting the committee’s autonomy. “You cannot save the rule of law by breaking the law,” he wrote on Twitter.

Dutch Prime Minister Mark Rutte said he was “neutral” on the deal and had many “questions” about the interpretative declaration. He called on the commission to “ensure” that potential violations of the rule of law could be sanctioned “retroactively” from January 2021, regardless of when the ECJ delivers its verdict. The Dutch parliament has pushed for a strict mechanism to punish violations of EU values ​​and called a deal on the tool a “minimum” it can accept.