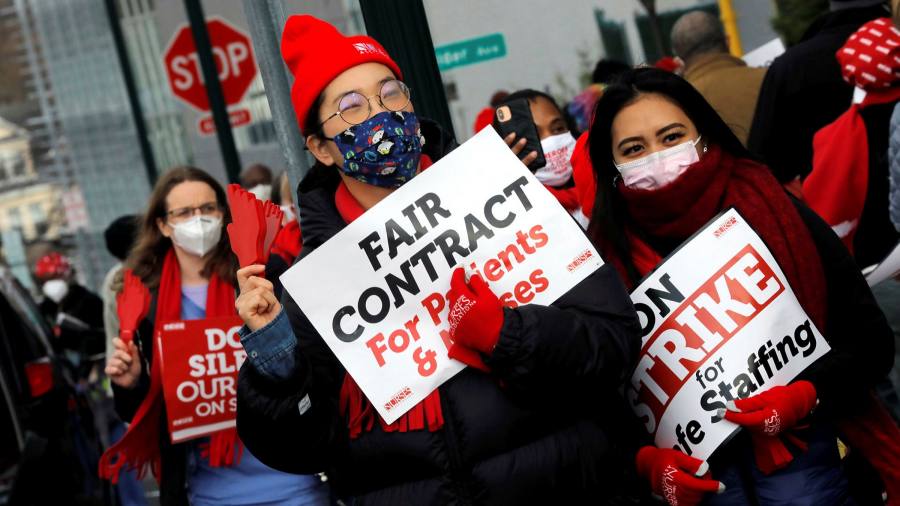 
Montefiore Medical Center, in the New York suburb of New Rochelle, is known as a safety hospital because it takes care of patients regardless of their ability to pay. For nurses at the facility, this has translated into an overwhelming burden during the coronavirus pandemic.

This month, around 200 nurses represented by the unions at the private hospital staged a two-day, picket-line strike for 12 hours at a time to protest against the working conditions they said had made their lives almost impossible.

As the number of Covid-19 patients increased, they claimed the hospital pushed nurses to treat too many people at once and distributed personal protective equipment (PPE) that smelled like a chemical. and left some staff with rashes.

“If you can safely care for one or two patients, but you have four or five, you have to make decisions about who you are going to help,” said Judy Sheridan-Gonzalez, president of the nurses’ union at the ‘hospital. “It’s just a horrible thing for medical professionals to face.”

Staff and PPE shortages plagued healthcare workers across the country during the pandemic. But these problems are especially acute in overcrowded hospitals serving poor and minority communities, says Dr. Linda Aiken, professor of nursing at the University of Pennsylvania.

Each New York City nurse before the pandemic was responsible for an average of 6.5 patients, the highest in the state, according to a study by Dr. Aiken published in the medical journal BMJ. New York State does not have a cap on the number of patients who can be assigned to a nurse; California, on the other hand, requires nurses to treat no more than five patients each. Studies have shown that patient mortality rates climb by 7% for every additional patient assigned to a nurse. Individual hospitals generally do not make their staffing ratios public.

“This is a bad comment about how American hospitals try to manage staff even under normal circumstances,” said Dr Aiken. “They are very much in love with this idea of ​​just-in-time staffing and just-in-time procurement. It’s a manufacturing idea that doesn’t work in hospitals. “

This cost-cutting philosophy prevents hospitals from maintaining inventories of PPE beyond the state-mandated 90-day supply or planning for more than the minimum number of workers at any given time, Dr. Aiken.

Ms Sheridan-Gonzalez, who works a few miles south of New Rochelle at a hospital in Montefiore in the Bronx, New York’s poorest borough, said staff shortages existed even before the pandemic. After the Covid hit, she said, conditions worsened – and some patients were left in their own trash until a nurse or medical assistant could be found to help them.

Ms Sheridan-Gonzalez said she recalled a dystopian movie when she compared her emergency room with outposts of the Montefiore health care system in wealthier suburbs. “It’s like you see the rich in the sky and the poor in the ground,” she said. “They are two worlds.”

If the United States doesn’t get the pandemic under control, Dr Aiken has warned that the problems nurses face in places like the Bronx could become more widespread. “You would expect this in hospitals serving minorities,” said Dr Aiken. “What is inexplicable is how it started to happen everywhere.”

At least 213 registered nurses nationwide had died from Covid in September, according to a study by National Nurses United, a union of healthcare workers. They estimate that 258,768 others have been infected. The mental health of nurses has also suffered, with 86% of 1,100 healthcare workers probe by a nonprofit, Mental Health America, which reports anxiety

In Montefiore New Rochelle, a nurse and a nursing assistant died from Covid-19 this year, and a handful of older nurses were so afraid of getting sick that they retired prematurely, Ms. Sheridan-Gonzalez said.

Bea Grause, president of the New York State Healthcare Association, said member hospitals, including Montefiore, were working to recruit nurses from out of state and attract others out of retirement to avoid shortfalls but faced financial limitations. Budgets are tight after a ban on lucrative elective proceedings earlier this year slashed revenues.

“I have been a nurse for a long time, and I think for the vast majority of healthcare workers, doctors, nurses, others, they understand that this is a team and that their administration is there to support them,” said Mrs. Grause. “I don’t understand why, especially now when there is a great opportunity to sit down at the table and fix these issues without putting patients at risk, why this is not happening.” 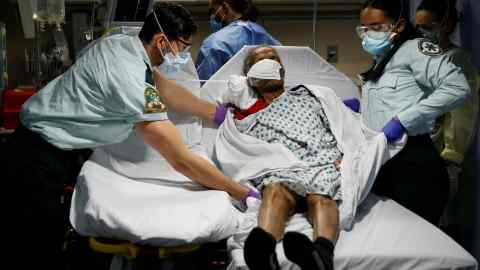 Marcos Crespo, a Montefiore executive, said in a declaration before the strike, the nurses’ union “selfishly put the community at risk and used Covid-19 as a political football”. He said the hospital network had offered nurses a pay raise, fully funded health insurance, tuition reimbursement and other benefits, but would not negotiate staffing levels.

Ms. Sheridan-Gonzalez said their offers were “too little, too late”.

“What has Montefiore done since June?” Rochelle’s new nurse Maria Castillo asked in a declaration released by the union on the second day of the strike. “They put up a bunch of billboards on the highway. They bought TV commercials calling us “heroes”. They want the community to think they like us. The reality is they’d rather spend millions of dollars on their public image, instead of making sure we have enough nurses to care for everyone who is sick!

Dr Aiken said solutions to the staffing dilemma could include national legislation to cap nurse-to-patient ratios and an extension of reciprocal licensing agreements that allow nurses to cross state borders.

Until then, nurses at Montefiore New Rochelle remain at odds with hospital management. Some said they lost shifts after their walkout. Hospital representatives did not respond to a request for comment.

For nurses, a strike is “not the first thing they think about,” Ms. Sheridan-Gonzalez said. “They just don’t know what else to do.”