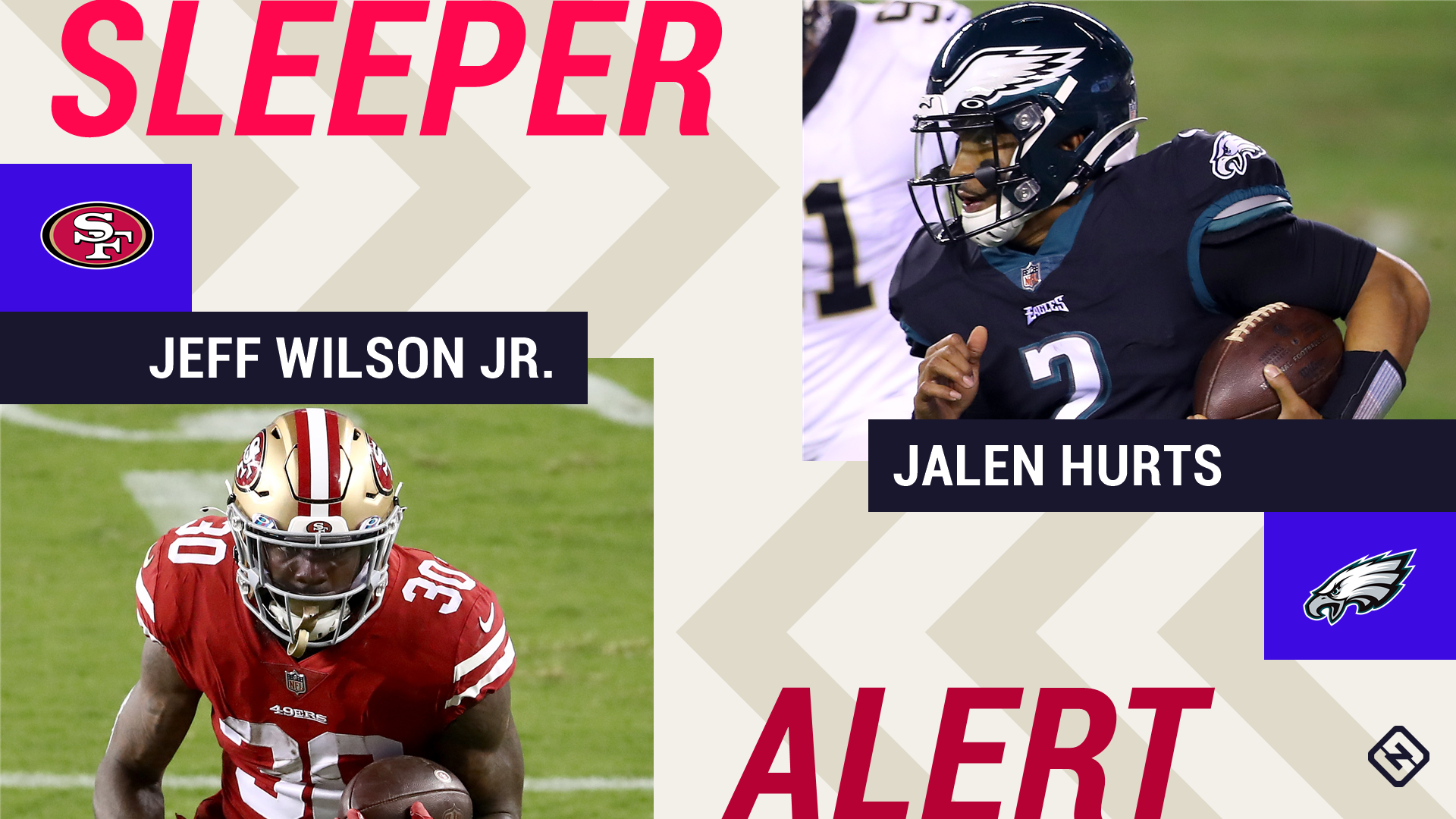 If you’re still alive in the fantastic playoffs, congratulations on getting this far, but now at first sit-em decisions get even more difficult. Thanks to a few injuries to the running back – namely Christian McCaffrey, Raheem Mostert, James Conner and Ronald Jones – the depth of some teams will be tested this week, and many owners will have to rely on ties and streamers to move forward. Even if you don’t suffer from injuries, finding a high potential flex game or a new high volume option for the flex point can increase your chances of winning a fantastic championship. Ahead of Week 15, Jeff Wilson Jr., Jalen Hurts, Russell Gage, and Gerald Everett represent some of the best under-the-radar options that fantasy owners can trust to score victories.

WEEK 15 FANTASY: Busts | Start them, sit them down

Our Week 14 sleepers ended up being solid, and we had at least one “hit” player in every position. JD McKissic worked at RB while Philip Rivers and Kirk Cousins ​​had decent days at QB. At WR and TE, Darnell Mooney ended up nabbing a TD while Mike Gesicki found the end zone twice in one of his best games as a pro. Arizona D / ST was a homerun for us as well, as Haason Reddick alone (five sacks) ensured they had a good game against the Giants. There’s still room for improvement and room for bigger hits, so we’ll try to keep finding hard-hitting players for our must-see matches.

Jeff Wilson Jr., 49ers @ Cowboys (Jacob Camenker). With Raheem Mostert battling an ankle injury, Wilson could end up being the backfield leader for the 49ers against the Cowboys. Even though Mostert is capable of playing, Wilson has still averaged 11 touches and 47.7 yards per game in his last three outings, and that has come up against tough defenses (Rams, Bills, Washington). The Cowboys have given the RBs the second-most rushing yardage this season (1,727), so Wilson should be able to do some serious damage as RB2. If Mostert is out he could be a marginal RB1 if all goes well.

Gus Edwards, Ravens vs. Jaguars (Vinnie Iyer). The Gus Bus and Dobbins Express are expected to complement Action Jackson for a massive match on the pitch against a team that just faded against Derrick Henry.

James Conner or Benny Snell, Steelers @ Bengals (Matt Lutovsky). The Steelers’ running game has been nonexistent lately, but it should be revived against an outclassed Bengals team. Not only will Cincinnati likely be shut down on offense, but its defense allows for the fifth most rushing yards per game (131.7) and yards per carry (4.6). Conner should get back on track if he can play thanks to a quad injury, and if he’s out Snell should excel in this favorable game.

Jalen Hurts, Eagles @ Cardinals (Camenker). Hurts impressed on his first start to the season, as he totaled 167 yards and one TD in the air while rushing for more than 100 rushing. His rushed ground makes him a viable streamer every week, and this showdown with the Cardinals could be good for him. The Cardinals gave the QBs the sixth most rushing yards with a 316 mark, so Hurts could have another big day of racing. Don’t be afraid to play him if you’re desperate for a solid quarterback option.

Ben Roethlisberger, Steelers at Bengals (Iyer). Roethlisberger could be very hard to trust after games in Washington and Buffalo, and the game isn’t great on paper, but Pittsburgh will throw more than 40 times in a one-dimensional attack in a game up for grabs.

Philip Rivers, Colts vs Texans (Lutovsky). Rivers has averaged 278 assists and 2.3 touchdowns over his last four games, and that includes an outing for 285 yards and two touchdowns in Week 13 against Houston. The Texans were just lit by Mitchell Trubisky, so Rivers has a high floor and a solid ceiling again.

Tyron Johnson, Chargers @ Raiders (Camenker). With Mike Williams (back) banged up and the Chargers playing Thursday night, Justin Herbert may have to find a new WR2 to target in this one. Johnson turned out to be his favorite guy behind Keenan Allen against the Falcons, and Johnson had 55 yards and one touchdown in six catches. The Raiders ceded the 11th most fantastic points to the WRs and just fired their defensive coordinator in a short week, so Johnson could be in a sticky spot.

Michael Pittman Jr., Colts vs. Texans (Iyer). Houston should try to contain at least TY Hilton this time around. This will open things up for the rookie on the other side to be busy playing the racing game.

Russell Gage, Falcons vs. Buccaneers (Lutovsky). In the last four games (two of which included Julio Jones), Gage has averaged 4.8 catches, eight targets and 56.3 yards per game, which is decent, but he’s been even better the last two games. scoring in each. To be fair, last week’s touchdown came when Gage threw a pass to Calvin Ridley on a tricks game, but he’ll still see plenty of touches this week in a game that Atlanta will likely be unable to run in much. Even though Jones is active, Gage is still in play as WR3.

Irv Smith Jr., Vikings Against Bears (Camenker). Smith had a big week against the Bucs in Week 14, catching his four targets for 63 yards and a touchdown. Kyle Rudolph (foot) missed this game and his status going forward is uncertain. If Rudolph can’t play against the Bears, Smith will be the No. 1 tight end for the Vikings, and while Tyler Conklin could get targets, Smith will be the No. 1 wide receiver at position. This should bode well for Smith’s gains, given that the Bears have given the TEs the fourth-most fantasy points this year.

Dan Arnold, Cardinals vs. Eagles (Iyer). He has scored in the last two games and is used more and more by Kyler Murray. He doesn’t get a lot of targets or shots, but they can make an impact.

Gerald Everett, Rams vs. Jets (Lutovsky). Everett’s goals are still irregular, but just two weeks ago he had seven and he continues to play a high percentage of shots. Against the Jets, which give TEs the most fantastic points by far, Everett is a decent bet for a good game in terms of yardage and / or touchdown.

Cleveland Browns @ Giants (Camenker). Daniel Jones couldn’t move the ball at all against the Cardinals and appeared to be hampered by the hamstring injury that kept him from playing against the Seahawks. He should be healthier over time, but even healthy he’s prone to sacks (he took six against the Cardinals) and turnovers. The Browns have just given up 47 points to the Ravens, but they have a strong passing surge that should be able to shake Jones a bit.

Tampa Bay Buccaneers in Falcons (Iyer). Matt Ryan is melting, and going one-dimensional will likely open the door for bags and spikes.

Arizona Cardinals vs. Eagles (Lutovsky). Even though Jalen Hurts is racking up a decent amount of fantasy points, the Cardinals D / ST can have a good game. Arizona just finished an eight-sack, three-takeaway game in New York City, and they’ve generated 12 total sacks and six turnovers in their last three games. The Eagles are still putting a lot of pressure on QB, and Hurts is planning to make a rookie mistake or two on his first road start.