Egypt discovers pharaonic treasure: ‘there is still more to find’ 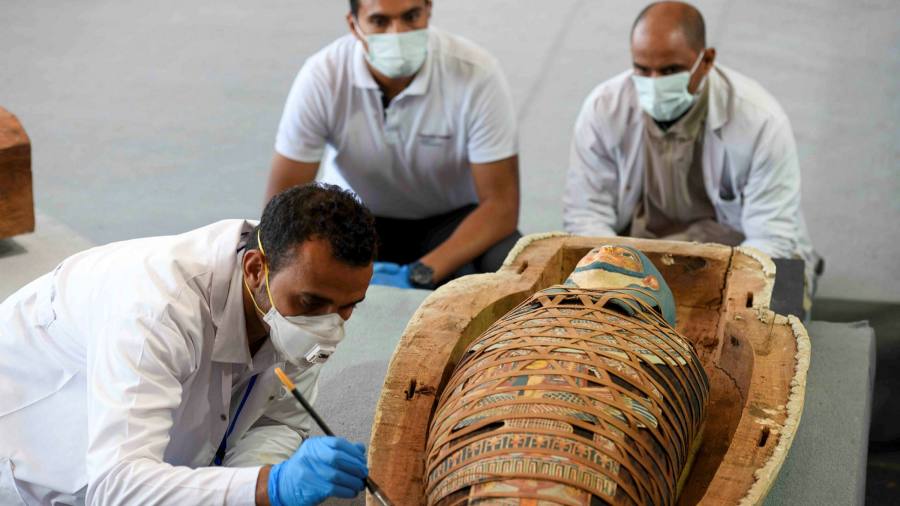 
A vast desert site on the southern outskirts of Cairo, the Egyptian necropolis of Saqqara is one of the richest pharaonic sites in the country, with spectacular monuments such as the oldest known pyramid in Egyptian history as well as the tombs of kings , high officials and sacred animals. .

After a series of discoveries this year, Egyptologists say the 5,000-year-old site has not delivered all of its treasures and that there is still much to discover.

“What we see above the ground is no more than 40% of what exists underground,” said Mostafa Waziri, head of the Supreme Council of Antiquities who led the Egyptian teams who made the latest discoveries.

“Saqqara is very rich and there is still more to be found. I think we can work on it for another hundred years.

Not far from the Pyramids of Giza and next to the ancient capital of Memphis, Saqqara has been used as a cemetery for millennia.

King Zoser, who ruled over 4,600 years ago, built his step pyramid there and it remains a landmark towering above the site. It is the oldest pyramid and the first known stone building in Egyptian history.

“Once Zoser was buried there, Saqqara became even more important because there was a greater reason for people to choose to be buried there to benefit from the king’s blessings,” said Salima Ikram, professor of Egyptology at the American University in Cairo. “It remained a cemetery path in the 8th century AD.

Mr Waziri reports remarkable archaeological finds at Saqqara over the past two years, including the decorated tomb of Wahte, a priest who lived in the 25th century BC, caches of gilded statues, and unusual finds such as a mummified scarab and a balmy lion cub.

The recently discovered coffins date back to what is known as the late period of about 664BC to 332BC. and some are from the later Ptolemaic dynasty which ruled until the death of Cleopatra, his last queen, in 30 BC.

The decorations on some of the coffins, Waziri said, especially those from a mine of around 100 coffins announced in November, suggest they belonged to senior officials and personalities.

In a year when the pandemic has decimated Egypt’s tourism industry, officials celebrated the new findings with big events, calling on diplomats and the media to highlight the country’s riches.

The coffins will be on display in a series of new museums, including one in the Red Sea resort of Sharm el-Sheikh and in the huge Grand Egyptian Museum in Cairo, which is due to open in 2021. Tourist arrivals in Egypt in 2020 fell to 3 million. , less than a quarter of the record 13 million visitors who visited the previous year, according to official figures.

A TV show in recent days has shown that Mr. Waziri was lowered into another burial shaft from which the coffins had not been removed. They appear to be stacked in layers around him covered in millennial dust, which he uses a brush to erase to reveal colorful decorations.

Zahi Hawass, a renowned Egyptian archaeologist working on another excavation at Saqqara, expects to announce new finds in early 2021. These are also coffins but this time from the New Kingdom – and therefore an even older era than the artefacts discovered in recent months. “Saqqara was a playground for kings,” he said. “Tutankhamun lived and died near here.

The burial pits were found in a part of Saqqara called Bubasteion which once included a temple complex dedicated to Bastet, a goddess of love, beauty and motherhood depicted in the form of a cat. Coffin caches could make a huge contribution to our understanding of the ancient Egyptians, Ms. Ikram argued.

“If we look at the contents of each well in its entirety and compare the texts on the coffins, we could tell if the people inside are related because of lineages, commerce and priestly association,” he said. she declared.

“You can also learn about the making of coffins, shared beliefs and whether they were linked to the cult of Bastet. It would be great if qualified academics had the opportunity to review the material and, most importantly, publish it.