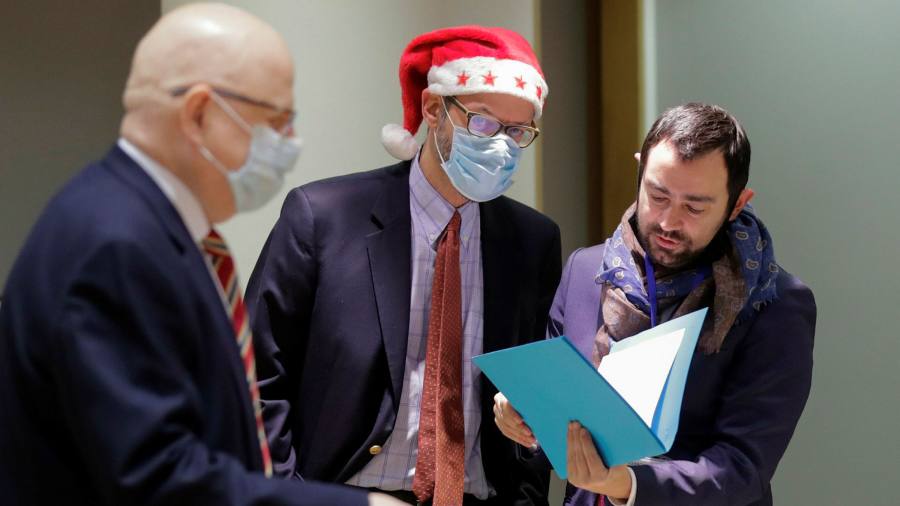 
Details of the historic UK-EU free trade deal have been released in full, as EU ambassadors begin the process of assessing and approving the terms of the deal before the end of the year.

The historic trade deal, which was announced by British Prime Minister Boris Johnson and European Commission President Ursula von der Leyen, Thursday, will enter into provisional force on January 1 and will be the largest bilateral trade deal signed by the two sides, covering trade worth around £ 660 billion.

The deal, which follows nine months of tense negotiations, will ensure tariff-free trade in most products and create a platform for future cooperation on issues such as tackling crime, energy and data sharing. However, concerns are emerging about support for UK companies, which will have to switch to the new trade deal from next week.

The 1246-page document, which has been categorized into seven parts, has been described by UK chief negotiator David Frost as “the start of a moment of national renewal”, allowing the UK to make laws according to its own conditions. “This is one of the most important and broadest agreements of all time,” added Lord Frost.

In the controversial area of ​​fisheries, the UK will depart from the EU’s common fisheries policy and establish a new identity as an ‘independent sovereign coastal state’, according to details published in a Summary of 34 pages of the agreement. The agreement establishes a five-and-a-half-year transition period during which EU access to UK waters will be reduced by 25 percent. After that, the two sides will hold annual quota negotiations.

The National Federation of Fishermen’s Organizations said the sector was “sacrificed for other national objectivesAnd argued that the deal would be seen as a “defeat” for the industry.

Responding to the criticism, a senior official in the UK negotiating team said: ‘The crucial element in fisheries policy is that although there is a transition, at the end of the transition , it reverts to normal arrangements and we have full control over our waters. “

On Christmas Day, European ambassadors from the 27 member states were briefed on the deal by the chief Brexit negotiator in Brussels, Michel Barnier. They have started the process of approving the deal, which will be applied provisionally from January 1. The European Parliament is due to vote on ratifying the entire agreement in the new year.

Minister Michael Gove wrote in the Saturday Times newspaper that the UK and the EU could develop a “special relationship” after Jan. 1 and highlighted what he argued as the long-term benefits of the deal. However, he admitted that in the short term, businesses and individuals would “have to adapt to new customs processes and border procedures”.

Sam Lowe, senior researcher at the Center for European Reform think tank, warned companies could face a “difficult period of readjustment” in the new year.

“While businesses will most certainly welcome the deal, they will suffer from the lack of an additional grace period, or implementation, to give them more time to prepare for the change,” he said. declared.

Mr Lowe added: “There is no legal reason why an additional implementation period could not have been included in the trade agreement – whether it was a temporary partial extension of the status quo or mutually agreed flexibility at the border “.

The agreement provides for a grace period of up to six months to continue the exchange of private data streams for UK and European businesses. The deal gives the EU time to give the UK a ‘adequacy’ decision which recognizes UK data protection standards as strong enough to allow the private information of EU citizens to flow freely to the UK. A senior EU official said the adequacy decision was likely in the “coming weeks”.

In his Christmas message to the publicMr Johnson hailed the new deal, arguing that it was “a deal meant to give certainty to businesses, travelers and all investors in our country.” He said the new arrangement would be “the basis for a happy, successful and stable partnership” with the EU. “

Parliament will be recalled on December 30 to allow MEPs to consider the new legislation before the end of the transition period next week.

Labor leader Sir Keir Starmer said his party would support the deal, arguing that at a time of such “national significance” it would not be “credible” for his party to be on the “sidelines”.

Although the deal is expected to pass in parliament, Mr Johnson is also keen to crush any potential backbench rebellion. Ahead of Thursday’s announcement, members of the Eurosceptic European research group said they would again convene a “star chamber” of legal experts to analyze the legislation.

The PM is said to have urged Tory MPs in a series of WhatsApp messages to support the deal, saying the terms of the deal would address the concerns of hard-core Brexiters. “I know the devil is in the details, but I’m sure it can survive the most ruthless and Talmudic scrutiny of the legal eagles of the Star Chamber,” he reportedly wrote.