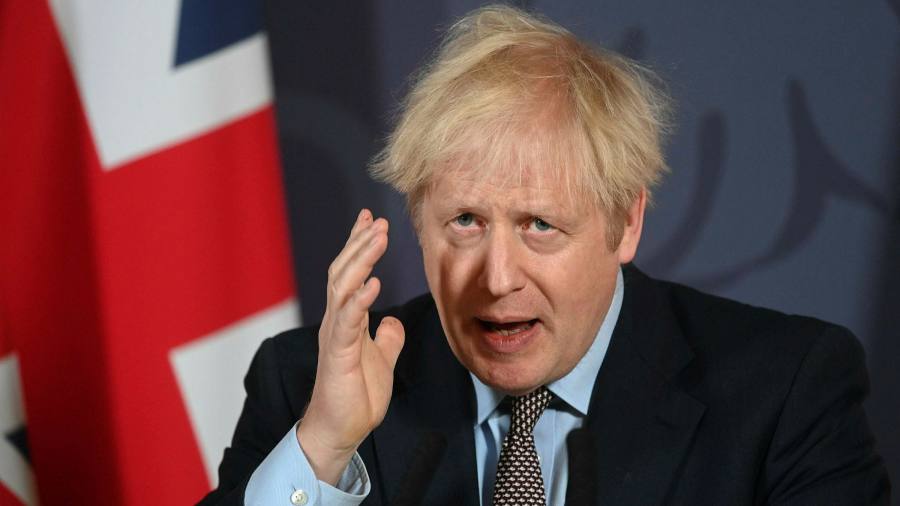 
Boris Johnson admitted that the Brexit trade deal fell short of his financial services ambitions, as Brussels signaled the City of London had to wait until after January 1 to find out what market access it would have to the future.

The Johnson government intends to present its plans on how to use Britain’s new regulatory freedom to deviate from bloc rules – including on financial services – but has yet to provide details. The new trade relationship between the two sides will come into force on January 1, assuming the treaty is passed by the UK parliament next week and the EU’s approval processes go smoothly.

Mr Johnson told the Sunday Telegraph that the 1,200-page treaty “may not go as far as we would like” on financial services. But the prime minister added that there were provisions for parts of the service sector, including “access for lawyers, lawyers” and “a digital bargain”.

Chancellor Rishi Sunak said on Sunday that the UK would look to “do things a little different” on financial services after leaving the single market, but added that he hoped the two sides would work together.

“This agreement is also reassuring because there is a stable regulatory cooperative framework mentioned in the agreement,” he told reporters. “I think this will give people the assurance that we will remain in close dialogue with our European partners on things like equivalency decisions.”

But Brussels has made it clear that the UK will have to wait until after January 1 to find out what market access rights its financial services companies will have in the future, warning that they will depend on the distance between Britain and EU standards.

“A series of additional clarifications will be necessary [from Britain], in particular as regards how the UK will depart from EU frameworks after December 31, ”the European Commission said in a explanatory document on the trade agreement of December 24.

“For these reasons, the Commission cannot finalize its assessment. . . and therefore will not make a decision at this stage. The evaluations will continue, ”he said.

The EU and UK have agreed that decisions on mutual market access for financial services will be based on each party unilaterally declaring that the other party’s regulatory systems are “equivalent” to its own.

The equivalence system – which Brussels already uses with other non-European financial centers – does not cover all financial services and allows access rights to be withdrawn with only 30 days’ notice.

But Brussels’ refusal to make decisions now means Britain is set to begin its new relationship with the EU with fewer equivalency rights in place than other financial centers, such as New York and Singapore, which means the UK will have to rely on limited access arrangements.

Britain granted the EU rights in a number of areas in November, but Brussels only made decisions on temporary rights in areas deemed vital to financial stability, such as bank access European clearing houses to UK clearing houses.

Brussels will grant equivalency rights “when they are in the best interests of the EU,” the bloc said in its Dec. 24 statement.

The UK had hoped to get provisions in its trade agreement that would add more stability to the equivalency system. He wanted at least to replicate the provisions of the EU’s agreement with Japan, which provided for consultations and prior warning before the withdrawal of equivalence.

But according to EU officials, this was rejected over fears that the UK would make it as difficult as possible for Brussels to revoke the equivalence.

Instead, the two sides will hold talks in early 2021 to draft a memorandum of understanding on future financial services policy cooperation, with the aim of agreeing on a text by March. However, the memorandum would not have the same legal force as an international treaty.

“This deal was never going to do much in terms of access to financial markets,” said Sam Lowe of the Center for European Reform. “It’s less than [what is] in the EU agreements between Canada and Japan, ”he added.

The UK financial industry still hopes for a closer relationship with the EU in the future. After the deal was announced, Bob Wigley, executive chairman of the UK Finance trade body, said: “It will be important to build on the foundations of this trade deal by strengthening arrangements for future trade in services. financial. ”

Mr Johnson said the UK would seek to make the most of its freedom of regulation to develop other parts of the economy. “We can’t somehow suddenly decide that we’re free and not decide how to exercise it. This government has a very clear agenda to unite, take it to the next level and spread opportunities across the country, ”he said.