Nigerian port crisis: the charge of 4,000 dollars to transport goods through Lagos 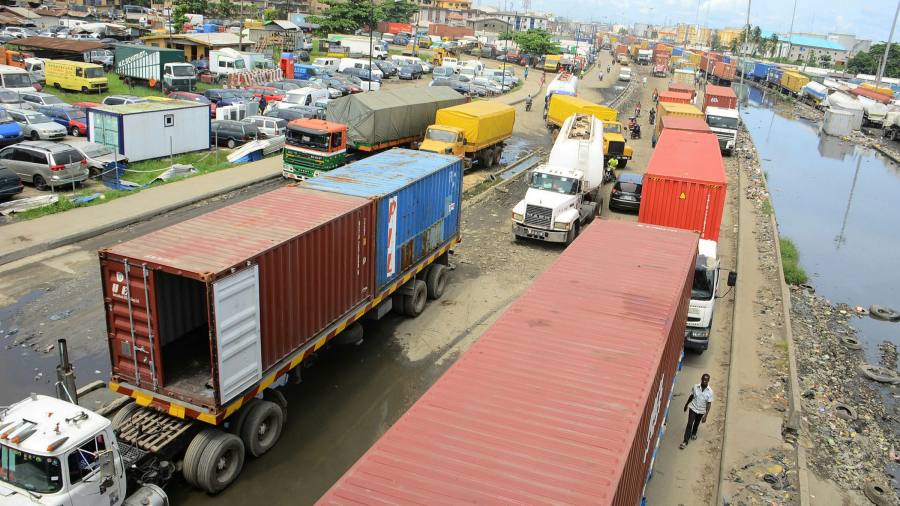 
Congestion at the port of Lagos has become so severe that it can cost over $ 4,000 to transport a container 20 km to the Nigerian mainland these days, almost as much as it costs to ship 12,000 nautical miles from China. .

A long-standing crisis at the ports of Apapa and Tin Can Island, major trade entry points into Africa’s largest economy, has been exacerbated by the pandemic-induced economic recession and the recent unrest in Nigeria’s commercial capital. Dozens of ships idle at sea, while hundreds of trucks remain in traffic for days or weeks waiting to enter and exit the port.

“During the pandemic, there was a lockdown and then curfews, so the dock workers couldn’t get back to work as planned. This reduced productivity and prolonged long stays of ships, ”said Otunba Kunle Folarin, chairman of the Nigerian Ports Advisory Board.

Around the world, the coronavirus pandemic has strained international supply chains and threatened to disrupt trade.

In Lagos, the port area is even more congested during the busy year-end period, and the Seaport Terminal Operators Association estimates that congestion costs the country $ 55 million per day in lost economic activity.

Just days before the African Continental Free Trade Area agreement goes into effect, Nigerian companies are complaining that the higher costs are preventing them from competing. “We all know that congestion in ports is bad for the economy,” said Jumoke Oduwole, head of the agency responsible for improving the business environment in Nigeria.

“The government has talked about the ease of doing business,” said Muda Yusuf, director general of the Lagos Chamber of Commerce and Industry. “But if there is an area where we have not felt the effort of the government. . . it is in the ports, where virtually nothing has changed.

The port’s capacity has not increased since 1997, even though Lagos’ population has practically tripled. Nigeria imports a lot of raw materials and almost all finished products, and congestion causes production delays for multinationals.

“There has been progress in improving roads and efforts to [speeding up] customs clearance of containers, but it has not been consistent or regular, ”said a senior executive at a multinational. “I don’t see this problem resolved in the next 12-18 months.”

The average spot rate this year to ship a 20ft container from Shanghai to Lagos is around $ 3,000, according to Shanghai Containerized Freight Index data provided by Dutch consulting firm Dynamar, which is around $ 3,750. at 4000 USD for a 40ft container. The current spot rate is $ 5,000. Cargo ships often wait more than a month offshore before they can unload their cargo at the port – roughly how long some spend in transit to Lagos from China.

The increase in congestion at the end of the year pushed up the prices of freight transport to the continent. Rather than paying lower tariffs for a truck that could take several weeks to enter port, while racking up expensive terminal container storage fees, most importers choose to pay cash prices to fleet operators, who charge 1.5 million naira ($ 3,953) to drive a 40ft container. from the tin can to warehouses in Lagos, according to senior logistics company executives. Apapa is cheaper at the moment, with current prices going up to 700,000 N, in part because it is considered a better run.

This figure includes road access charges and bribes, but does not include terminal or port storage charges, overhead costs – which can run into the tens of thousands of dollars – associated to ships parked at sea or money extorted by criminals and officials while trucks wait. days in traffic jams.

Port congestion is due to aging infrastructure, meager rail transport that forces 90% of goods to go by road, and an almost complete lack of automation, meaning every container must be physically inspected by customs officials. It has been made worse by the increase in maritime traffic since the country’s land borders were closed to combat smuggling last year.

Hadiza Bala Usman, head of the Nigerian Ports Authority, said the agency was working to speed things up. The NPA plans to digitize container handling and has pushed terminal operators to invest more, including Dutch company APM Terminals, which this year announced an $ 80 million upgrade to its Apapa facility.

A 35 km stretch of road from the port is being renovated by the construction company of Nigerian billionaire Aliko Dangote in exchange for a tax holiday. More and more companies are also using barges to move containers to bonded warehouses, where they can clear customs away from the port.

Further improvements are on the horizon. About 60 km east of Lagos, Singaporean agribusiness company Tolaram and China Harbor Engineering Company are building a $ 1.5 billion deep seaport. But it is not expected to be completed until 2022.

Lomé, Togo, is today the busiest port in the region, and cargo destined for Nigeria is increasingly unloaded or shipped via smaller vessels from ports in Ghana, Côte d’Ivoire, Cameroon and Congo-Brazzaville.

“Nigeria is definitely behind the curve,” said Darron Wadey, senior analyst at Dynamar. “What you see in Lagos. . . I don’t remember seeing anything like it anywhere else in the world.