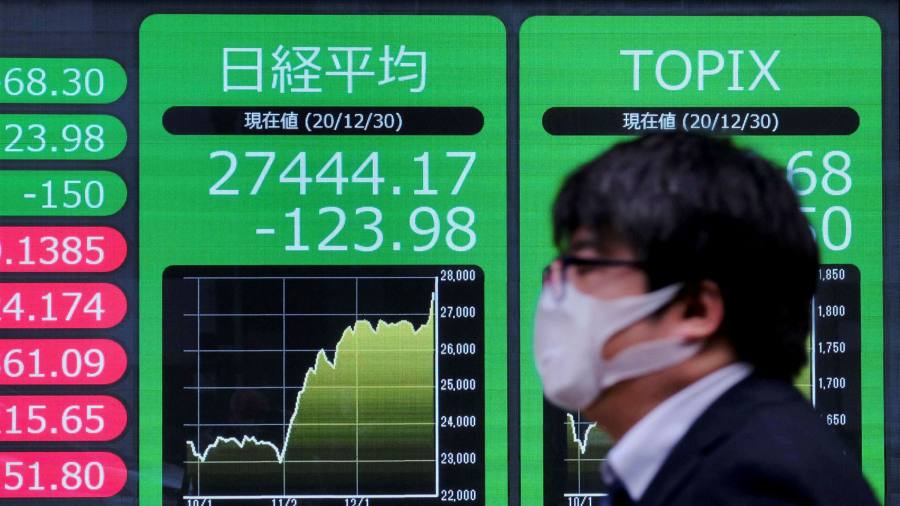 
Global stocks rose on Wednesday in hopes of an economic recovery in 2021 after the coronavirus pandemic.

The MSCI indicator of Asia-Pacific stocks excluding Japan rose 1.1 percent, building on record gains since November to hit a record high. China’s CSI 300 index of stocks listed in Shanghai and Shenzhen rose more than 1% to its highest level since 2015 as the EU and China braced for announce a long-awaited investment treaty. Hong Kong’s Hang Seng climbed 2.2 percent and South Korea’s Kospi rose 1.9 percent.

In Europe, the benchmark Stoxx 600 rose 0.2% in early trades, while London’s FTSE 100 also rose 0.2% after closing 1.6% in the previous session. Germany Dax continued to hover around the records hit earlier this week.

The British pound rose 0.7% against the dollar to $ 1.3593 – close to its year high – on the day UK MPs are ready to approve the trade agreement with the EU concluded on Christmas Eve.

US futures have indicated that the benchmark S&P 500 blue-chip stocks are expected to open 0.4% later today.

US House of Representatives Monday voted to increase direct stimulus checks to Americans of $ 600 to $ 2,000, pressuring the Republican-controlled Senate to bolster this month’s $ 900 billion economic relief package.

The yield on 10-year Treasury bills, which moves inversely to price, rose 0.02 percentage point to 0.95% before the bumper sale long-term government bonds next year.

Meanwhile, the British government confirmed On Wednesday morning, the country’s drug regulator had approved the Covid-19 vaccine made by the University of Oxford and AstraZeneca. The news came shortly after a British woman became the first person to receive the second dose of the vaccine made by BioNTech and Pfizer.

UK natural gas prices have risen as demand is expected to rise and already cold temperatures are expected to drop further this weekend. The UK day ahead contract rose 1.4 percent to 57.50 thermal pa, extending gains since the start of November to 65 percent.

The rise in gas prices this winter also reflects the UK’s reliance on liquefied natural gas imports, which exposed it to a price rally in Asia.

Video: Will tech stocks end their bull run in 2021? | Graphics that matter