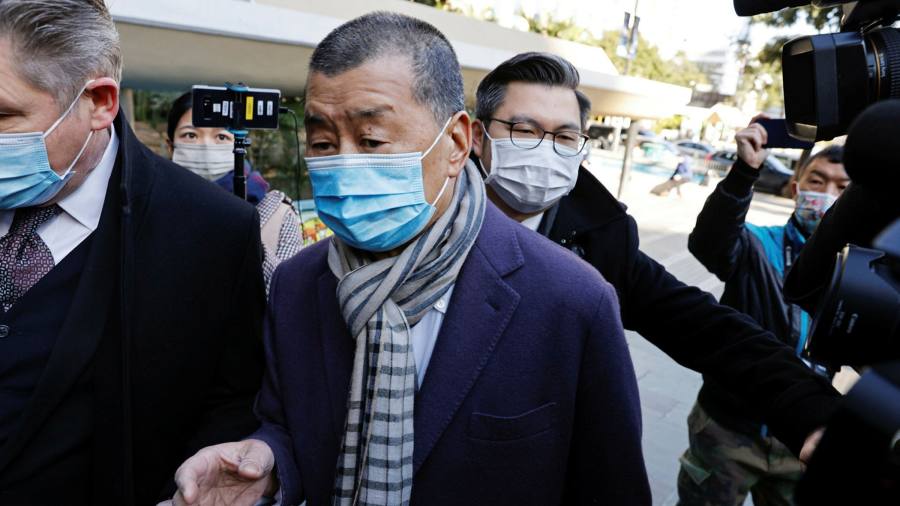 
Hong Kong media mogul and democracy activist Jimmy Lai was returned to jail after the territory’s highest court overturned his bail, in one of the territory’s most high-profile cases in under Beijing’s sweeping new National Security Law.

Mr. Lai, one of Hong Kong’s most vocal critics of China’s ruling Communist Party, was released on Hong Kong $ 10 million ($ 1.3 million) bail last week. He was placed under house arrest and charged with avoiding giving interviews and using social media.

But the final appeals court said on Thursday that he was to be detained while prosecutors’ appeal was considered, calling the lower court’s decision to grant Mr. Lai bail as “flawed.” Mr. Lai will remain in detention until his bail hearing on February 1.

The move comes just days after People’s Daily, the spokesperson for the Chinese Communist Party, lambasted the decision to grant bail and raised the specter of his case being transferred to the mainland.

The comments compounded fears about the independence of Hong Kong justice as Beijing carries out a crackdown on dissidents and pro-democracy activists following protests last year.

Mr. Lai was stopped earlier this month and faces fraud charges for allegedly abusing a company’s premises under its lease. He was previously arrested in August and indicted under Beijing’s new national security law for alleged collusion with foreign powers. He denies the allegations.

Mr. Lai, 73, has been a long-time Beijing target. Its Apple Daily newspaper is Hong Kong’s largest pro-democracy tabloid and has often been agitated by protesters during anti-government protests.

He is a strong supporter of US President Donald Trump’s hard-line approach to Beijing and has met with senior US officials, including Vice President Mike Pence and Secretary of State Mike Pompeo in Washington last year.

Mr. Lai resigned as chairman and chief executive officer of Next Media, the media conglomerate he founded, last week. The company said the move was “in order to spend more time managing personal affairs.”

Decision to quash Mr Lai’s bond comes a day after a Shenzhen court sentenced 10 Hong Kong protesters to between seven months and three years in prison in mainland China for violating border restrictions. The group was captured by Chinese officials in August as they tried to flee to Taiwan by speedboat to avoid national security charges. The group had been detained for four months and could not choose their own legal representation.

Two other members of the group, aged 16 and 17 at the time of their arrest at sea, also pleaded guilty but were taken into police custody by Hong Kong police without being tried. They are expected to face further charges in Hong Kong.