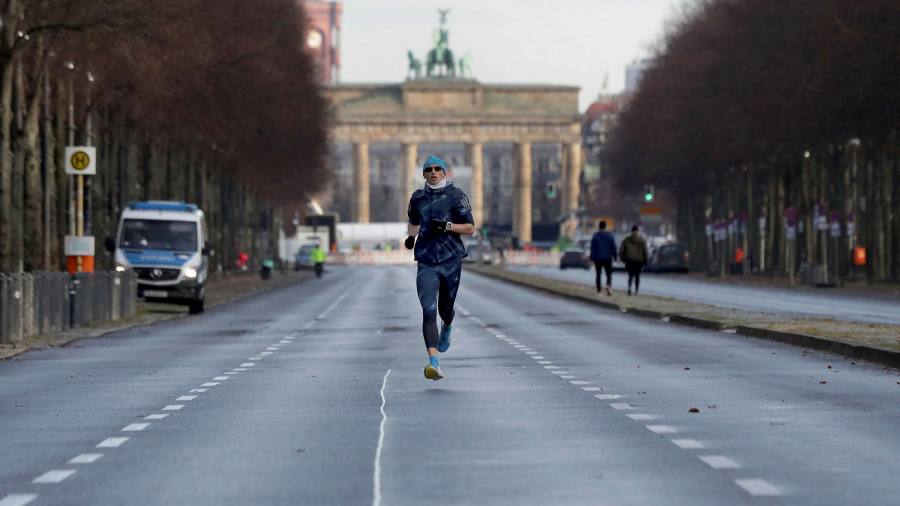 
Germany is preparing to extend its national lockdown until the end of January, as governments across Europe consider extending or tightening restrictions to tackle highly contagious mutations in the coronavirus.

“Premature easing would take us back a long way,” said Markus Söder, Premier of Bavaria and head of CSU, one of the ruling parties in Germany, on Sunday after the heads of the country’s 16 states met. practically over the weekend.

“The numbers are still way too high,” he added. “As boring as it is, we have to stay consistent and not give up too soon.”

The number of new infections in Germany has fallen below all-time highs as Christmas approaches, when the country had around 30,000 cases per day.

Just over 10,300 infections were reported on Sunday, although the number of test center submissions was still lower on weekends.

However, Germany’s seven-day infection rate stands at more than 140 per 100,000 population, nearly triple the level at which policymakers have suggested it would be prudent to relax restrictions.

I think the situation is very alarming. We can see hospitalizations increasing at a rapid rate

Chancellor Angela Merkel is due to meet German heads of state on Tuesday to decide whether to extend the current lockdown, which expires on January 10.

In the UK, where the seven-day rolling rate stands at nearly 400 infections per 100,000 population, the Prime Minister Boris Johnson suggested that the UK may have to impose stricter measures and delay the opening of schools.

“We are very much in agreement to do whatever it takes to bring down the virus,” he told the BBC. “This could imply stricter measures in the coming weeks.”

Britain’s Gibraltar territory also imposed a two-week lockdown on Saturday, after its chief minister said the virus was “spreading faster than we can control”.

In France, the government on Saturday postponed a nighttime curfew in 15 departments in the east and south-east from 8 p.m. to 6 p.m. The incidence of the coronavirus in these areas has increased faster than elsewhere, prompting local leaders to call for a tighter lockdown.

The government has also delayed the planned reopening of museums and cinemas, promised for Jan. 7, while restaurants and bars nationwide remain closed. Schools will reopen after the Christmas holidays on Monday.

French health ministry official Jérôme Salomon said on Sunday that the full impact of people seeing each other over the Christmas and New Year holidays would not translate into further hospitalizations until next week, adding that “the situation was worrying “, with daily infections already approaching. at 15,000 against 10,000 in early December.

“We still have four months of collective effort ahead of us,” Salomon told Journal du Dimanche.

As senior health officials in Ireland warned the virus was ‘out of control’ in the country, Deputy Prime Minister Leo Varadkar said further restrictions could not be ruled out even after Dublin tightened its latest national lockdown last week for the second time in eight days.

“I think the situation is very alarming. We can see hospitalizations increasing at a rapid rate, the number of intensive care as well, ”Mr. Varadkar told the national channel RTE on Sunday. “We have to turn off the tap. If patients continue to be admitted at the rate they are currently admitted, we will face difficulties later in January. ”

Mr Varadkar said the “explosion of cases” since Christmas has gone beyond modeling. Irish health officials reported a record 4,962 cases on Sunday – after warning that figures in the coming days would reflect delayed reporting of more than 9,000 new infections.

The extension of lockdowns in Europe follows strong criticism of how the EU purchase and distribution of vaccines.

While the United States administered more than 4 million doses of Covid-19 vaccines and the United Kingdom exceeded 1 million, Germany managed 238,000, while France injected only about 350.

Mr Söder told the Bild am Sonntag newspaper that the EU had “ordered too few doses and relied on the wrong manufacturers”. He called for a “massive acceleration of vaccination efforts”.

His comments came after Ugur Sahin, managing director of BioNTech (the company that developed the only vaccine authorized by the EU to date), told Der Spiegel magazine that “the process in Europe was certainly not as quick and straightforward as in others. country”.