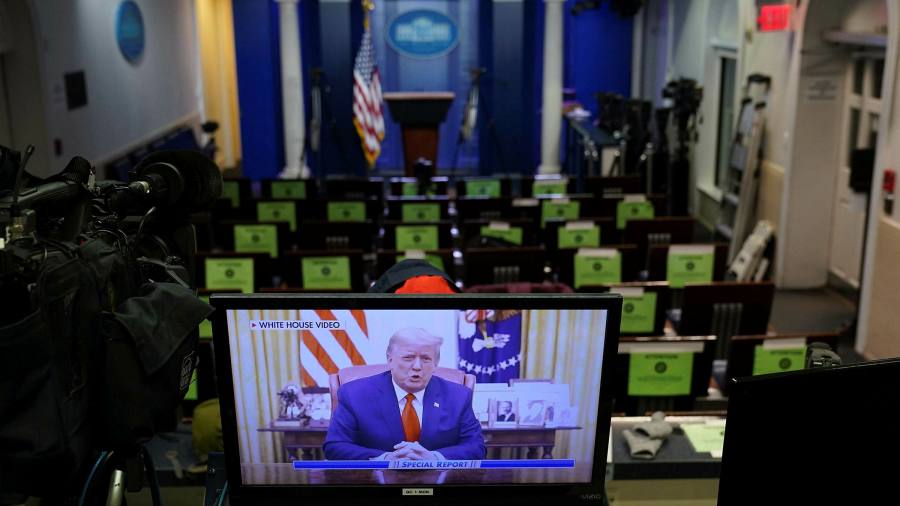 
To indict an American president once is a pretty serious matter. Doing it twice is unique in all of history. And the House of Representatives still had no other choice on Wednesday. Donald Trump had neither resigned following the seat of Congress he had instigated last week, nor did he unreservedly deplore it. His vice president Mike Pence had not used the 25th Amendment to oust him. A legislature that allowed him to serve his last week or more for convenience would have failed in his duty to the law.

The action against the president cannot stop at symbolic censorship. Unless proven otherwise, Republican senators should be prepared to condemn Mr. Trump when the House puts the issue to them. That it takes courage – some party members fear violent retaliation – is his own commentary on American civic health. The Capitol is currently reminiscent of a fortress, with perimeter fences and thousands of armed guards in latticework. Airbnb has even canceled reservations in Washington for President-elect Joe Biden’s inauguration next week. A supermajority for the conviction seems unlikely in these circumstances. To follow the gnomic allusions of Mitch McConnell, the leader of the Republicans in the Senate, this should not be ruled out.

If the vote gets to the Senate after Mr. Trump leaves, it is still worth it. The price, his exclusion from the public service, is as dear to some in his party as to any Liberal. Democrats should also not fear the loss of Mr. Biden’s first few weeks in power in this process. He suggested that senators “branch off” their jobs, dealing with administrative matters and simultaneously holding the Trump trial. None of this asks too much of a legislative chamber that boasts of itself as the largest in the world. It’s hard to think of a more appropriate use of Senate time than finding out and spreading the details of what happened on January 6.

At the very least, impeachment should force Mr. Trump to curtail his behavior in the time he has left. But even if he avoids conviction, he’s still open to criminal prosecution for the assault on Congress and other acts once he leaves office. Any action against him, political or judicial, involves a risk for public peace. Some of his followers showed him the extent of their loyalty to him. Indeed, prominent Republicans invoke the danger of a backlash as an argument against impeachment.

This is not a frivolous objection. It’s a reason to congratulate the 10 Republicans, like Rep. Liz Cheney, who voted for impeachment. But neither can a nation ruled by law constantly doubt the public’s reaction before applying the law. In this way there is a dark precedent and a paralyzed and frightening state. Had the Senate convicted and impeached Mr. Trump after his first indictment a year ago, the outrage on the right would arguably have been intense. But the storming of Congress and the resulting loss of life may never have happened. The past four years have been a lesson in the folly of putting off tough decisions and hoping for the best.

The trope that a week is long in politics now takes on a disturbing connotation. In his final days as president, Mr. Trump still has considerable leeway in foreign policy. He remains commander-in-chief of the most powerful armed forces in the world. His potential to hurt upon his exit was not neutralized by his impeachment. What he has done, at a bare minimum, is send a moral signal to the world about what American democracy is willing to tolerate. It is up to the Senate to decide its exact strength.