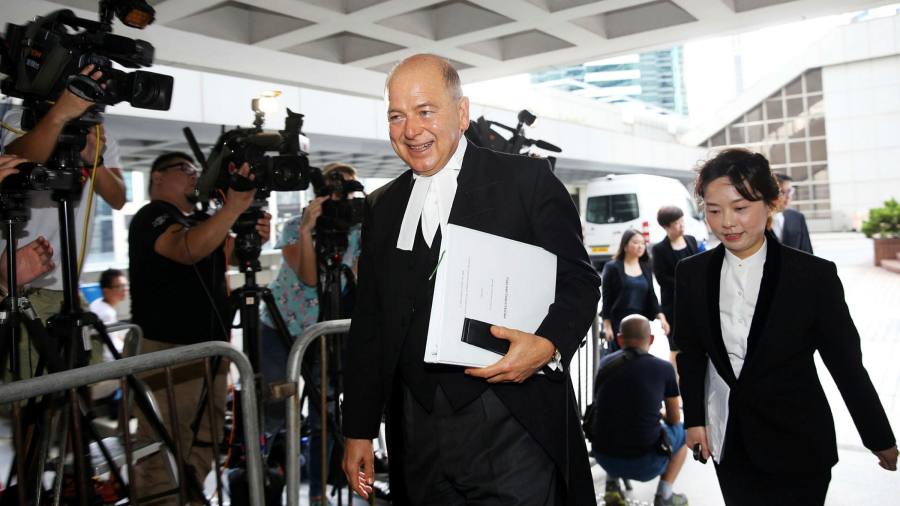 
A British lawyer pursuing a case against pro-democracy activists in Hong Kong has been called a “mercenary” by Dominic Raab, the United Kingdom’s Foreign Secretary, as controversy over his appointment grew.

David Perry, a QC, has been hired by authorities to prosecute nine activists for illegal assembly. Mr Raab, who was a human rights lawyer before becoming an MP, said he did not understand how anyone could take such a case “in good conscience”.

Mr Perry’s allies have said he operates under the “taxi rank” principle whereby lawyers take cases as they arise.

But Mr Raab told the BBC The Andrew Marr Show that a lawyer could resist such a case “under the bar code of ethics,” adding: “From Beijing’s perspective, this would be a serious public relations coup.

The Hong Kong government is suing a group of prominent pro-democracy figures, including media mogul Jimmy Lai, 73, and the city’s “father of democracy” Martin Lee, 82.

The trial, which begins February 16 in district court, focuses on charges the group has been implicated in organize illegal gatherings during the 2019 protests in Hong Kong.

The protests began in opposition to a law that, for the first time, would have allowed criminal suspects to be transferred to mainland China for trial. They then expanded to include concerns that Beijing was eroding the autonomy granted to the territory during the 1997 transfer from the UK to China.

Beijing responded by introducing a tough national security law last year that led to a crackdown on pro-democracy opposition by police.

Albert Ho, a former Democrat and lawyer who is also being sued in the case, said Mr Perry’s participation in the trial was “shameful”.

“The prosecution is only aimed at securing the conviction of all pro-democracy activists at all costs,” he told the Financial Times.

Mr Perry has acted for the Hong Kong government in the past, including in the 2017 corruption trial of former Hong Kong leader Donald Tsang.

After being rehired by the government, there was local speculation about how Mr. Perry would enter Hong Kong before February 16. Chinese territory has suspended commercial flights from the UK due to a new strain of coronavirus spreading in Britain.

Hong Kong has also introduced a mandatory 21-day hotel quarantine and barred entry to most non-residents.

Mr Raab, who has stepped up his criticism of Beijing in recent days, said on Sunday it was “shameful” for the Chinese embassy in the United States to claim that his government’s activities in Xinjiang province “were eradicating extremism ”among the local population.