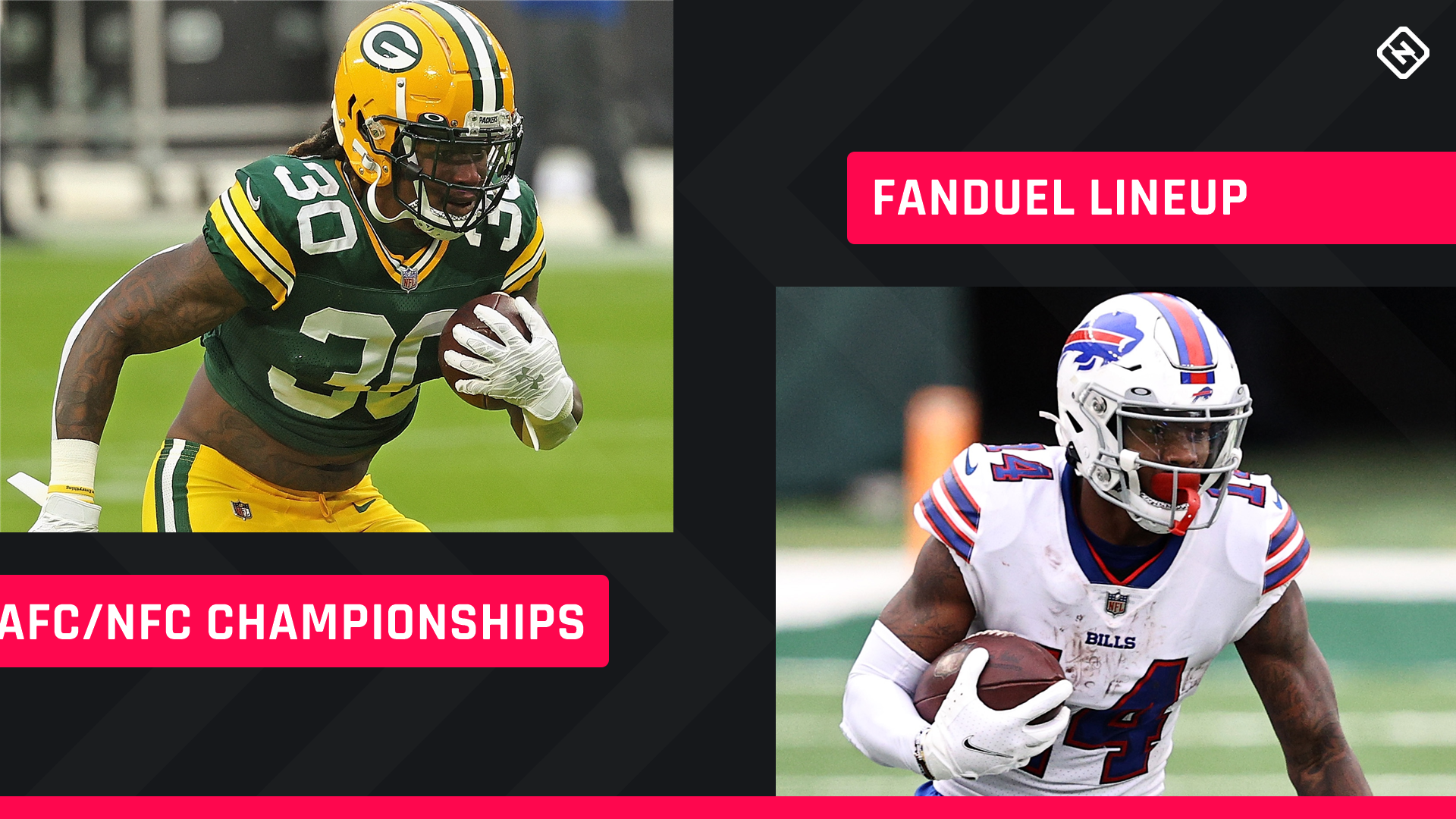 The stage is set for the final four NFL teams to go head to head for Super Bowl entitlement, but before that happens, DFS managers can put together another multi-game lineup. The conference championship slate features four elite offenses and tough defenses, so finding the right mix of players isn’t easy. Our FanDuel tournament strategy is all about paying off the top pass catchers and finding certain valuable choices at RB.

Of course, this composition is subject to change depending on the health of several players, including Patrick Mahomes (head / neck). For now, we’re counting on him to play (and we still have the D / ST Bills!), But if he’s out – with Clyde Edwards-Helaire (hip, ankle) and Antonio Brown (quad) – some things could change. Considering everything on the line, we expect everyone to at least try to play, but as always, we’re ready to pivot if necessary.

QB: Aaron Rodgers, Packers vs. Buccaneers ($ 8,700). You can’t go wrong with any of the four starting QBs on Sunday, but Rodgers has accounted for at least three total TDs in all but three games this year, including 11 of the last 12. Even Patrick Mahomes ($ 9,000) and Josh Allen ($ 8,500) didn’t deliver that high-cap level of consistency. Tampa limited Rodgers to far and away his worst game of the season in Week 6 (160 yards, two INTs, no touchdowns), but it’s hard to imagine that happening again. We will gladly pay here.

RB: Ronald Jones Jr., Buccaneers @ Packers ($ 5,600). Leonard Fournette ($ 7,200) got all the buzz in the playoffs, but it’s worth noting that Jones made 13 carries for 62 yards last week. He was not an afterthought in the Tampa attack, and as his bald quad continues to heal, he should be more involved. Fournette will always be the favorite when passing, but Jones has been the best runner and goal line option all season, and making him $ 1,600 less than Fournette is a steal, especially on FanDuel where the receptions are only worth half a point. Green Bay has given RBs the fifth most FanDuel points this year, so Jones has the potential to far outperform his award.

RB: Jamaal Williams, Packers vs. Buccaneers ($ 5,000). The Tampa race defense is one of the best, but we have to save some money somewhere to get our pass-catchers back. Williams is making a solid value considering his relatively high volume in a backup role. He had 12 runs last week, including an inside-five run where he was tackled just inches from the goal line. With AJ Dillon (quad) tarnished, Williams could see even more shots this week. Williams is by far the cheapest RB that will receive significant touches, so we’ll take our chances.

WR: Davante Adams, Packers vs. Buccaneers ($ 8,900). It doesn’t get much more automatic than Adams, who had nine catches for 66 yards and one touchdown last week against the Rams’ best pass defense. Tampa isn’t as good, so feel free to pay top dollar for Adams.

WR: Stefon Diggs, Bills @ Chiefs ($ 8,300). Diggs has been at Adams’ level this season, at least in catches and yards. He doesn’t score as often, but with at least six catches in every game but one and 106 yards in five of his last six games, you know you’re getting elite production in any game. These two receivers are even more valuable on DraftKings where you get a full point per reception and a 100 yard bonus, but they will do very well on FanDuel as well.

WR: Mike Evans, Buccaneers @ Packers ($ 6,600). Evans just finished a one-take, three-yard game, so he might not be as popular as he should be this week. All the better for us. It’s important to keep in mind that he faced arch-nemesis Marshon Lattimore last week, who he’s struggled with throughout his career. Equally important is that his only grip went for a touchdown, which shows his solid ground. With Antonio Brown (knee) absent or limited and Chris Godwin ($ 6,800) going through a deal of drops, Evans should see more targets this week. It really is the cheapest receiver on the board that you can “count” on.

TE: Travis Kelce, Chiefs vs Bills ($ 8,600). Like Adams and Diggs, Kelce has guaranteed production as long as Patrick Mahomes (head / neck) is active. At $ 2,900 more than any other TE, it will limit some of your other choices (for us it was at RB, flex, and D / ST), but it seems almost impossible to make it go away, especially since none of the other RBs are “sure things”.

FLEX: Scotty Miller, Buccaneers @ Packers ($ 4,900). We had to go cheap here, and Miller is as good a bet as any other for a big game or two. It could actually become a chalky value choice if Brown (quad) is absent. Either way, Miller usually gets at least one deep hit per game, and while that hasn’t resulted in much lately, there’s always a chance he’ll find the end zone. Other considerations included Demarcus Robinson ($ 4,800), Byron Pringle ($ 4,700) and Isaiah McKenzie ($ 4,600), but Brown’s injury pushed Miller to the top for us.

D / ST: Buffalo Bills @ Chiefs ($ 3,700). We take a defense against the chiefs. Not smart, right? Well, first off, that was the only defense we could afford, but beyond that who else is significantly better? All four offenses are elite and don’t return much, so whichever you choose is a bet. Obviously, Buffalo will be a major chalk pick if Mahomes (head / neck) is absent, but even if he’s active, he won’t be as mobile as usual due to the foot injury he sustained during the last week (which everyone seems to have forgotten about). In a perfect world we would have enough money to pay Green Bay ($ 4,400) in the hope that Tom Brady struggles in the cold, but we don’t, so hope the Bills can make a big game like they made it last. the week.