twournal All The News You Need
Home World news Debt and COVID: One in five British citizens borrows more in times of crisis | Business and economic news

Some nine million adults in the UK are running deeper into debt, a trend that is also exacerbating income inequality.

Nearly 9 million people in Britain had to borrow more money by the end of last year to help them get through the coronavirus crisis, new figures show that show growing gaps between the rich and the poor people.

This represents around a fifth of the UK’s adult population, or 47 million people. The findings are fueling a debate on how Boris Johnson’s administration can best protect segments of the population, such as the young and the lower paid, who have been hit hardest by the economic crisis.

Chancellor of the Exchequer Rishi Sunak and Bank of England Governor Andrew Bailey have highlighted these concerns in recent weeks and have started talking about measures that could close the inequality gap. 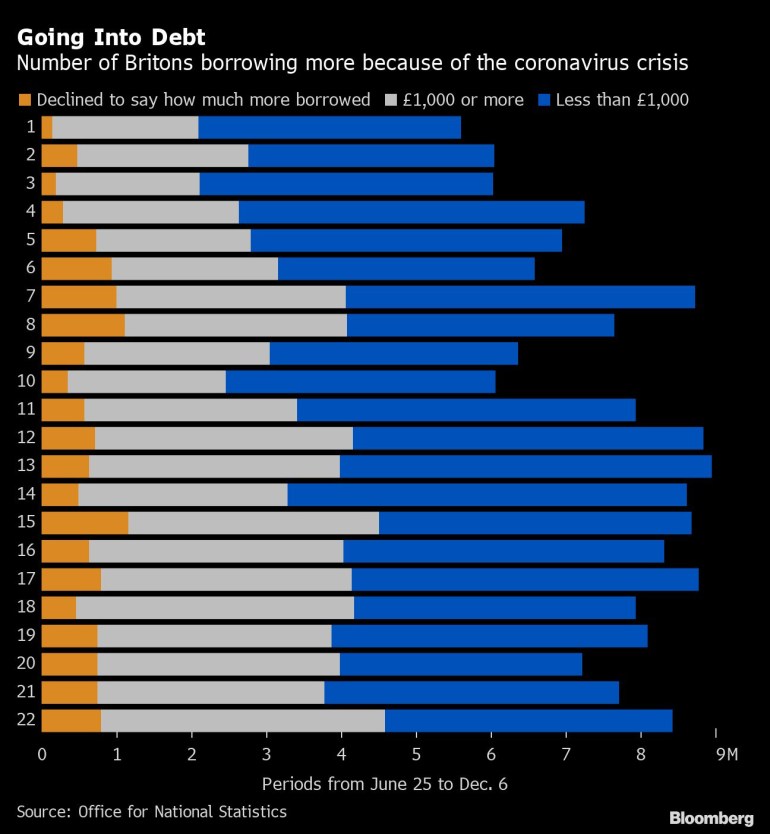 “The uneven effects of Covid concern me,” Bailey said in a webinar on Wednesday. “It’s clear to me that we need to get out of Covid in a way that speaks to all parts of the population.”

People under the age of 30 and those with household incomes below 10,000 pounds ($ 13,700) were much more likely to be on leave than the general population, the Office of National Statistics said Thursday. Government data also showed that the self-employed were more likely to report a reduction in hours and earnings.

Among those unable to work, more than half of the richest 20% continued to be paid in full, compared with just over a quarter of those of the poorest 20%. The self-employed and people with disabilities were more likely to have borrowed 1,000 pounds or more. During this time, fewer people were able to save for the coming year.

The results put pressure on Sunak to take action in his annual budget report, which is due on March 3. With the deficit at its highest in peacetime, there are calls for the better-off to shoulder the burden of future tax increases. 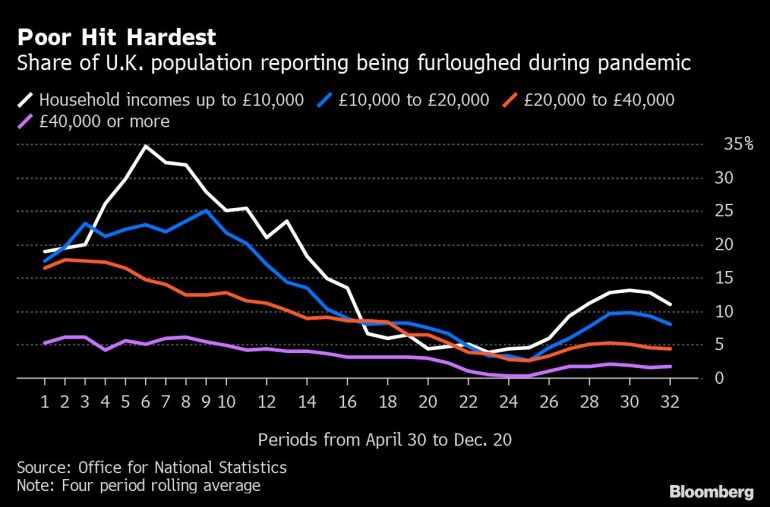 Separate ONS figures showed the gap between the rich and the poor was widening even before the pandemic struck.

Income inequality, measured by the Gini coefficient, reached 36.3% in the fiscal year through March, its highest level in a decade. The income share of the richest 1% has increased from 7% to 8.3% since 2011.

The inflation-adjusted median income of the poorest fifth of people fell 3.8% between 2017 and 2020. The richest fifth saw their incomes rise steadily.