Russia crackdown on Navalny supporters ahead of planned protests 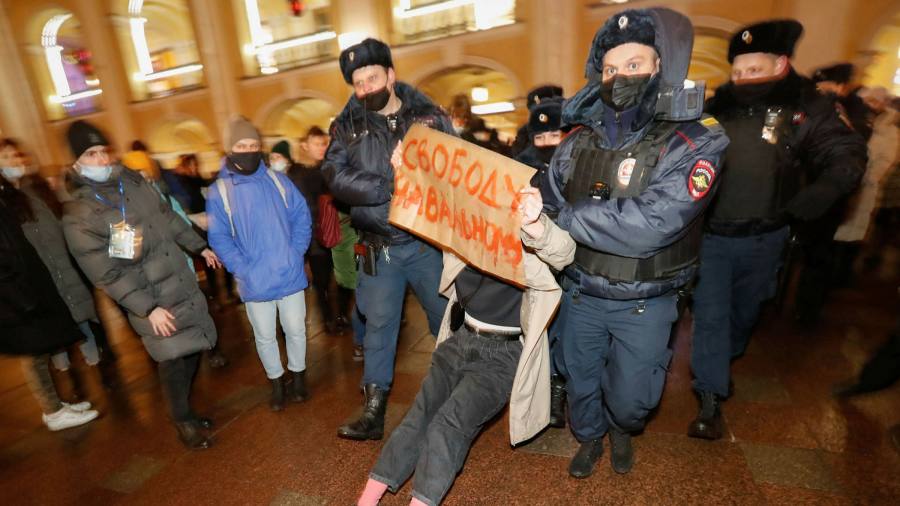 Alexander Gorovoi, Russia’s first deputy interior minister, said police were preparing to ensure public order “on the day of unauthorized events across the country, plans for which some quasi-politicians have been announced” .

“We have all the legal bases to hold administratively responsible anyone who makes such calls in person, on the Internet or via written messages before the event occurs,” he said in remarks released by the agencies on Thursday. state press.

Police arrested two of Mr. Navalny’s assistants and raided the homes and offices of several of his top aides, a move that echoed Russia’s approach to mass protests in the summer of 2019, which ended with police violence against participants and mass arrests.

The crackdown came as German Chancellor Angela Merkel reiterated it his request that Russia “urgently” release Mr. Navalny, President Vladimir Putin’s most prominent critic, and Finnish President Sauli Niinistö used a phone call with Mr. Putin to warn him of the “Implications” for relations with Europe.

Mr. Navalny was detained Sunday evening after landing in Russia from Germany, where he had spent five months recovering from an assassination attempt using a nerve agent that he and a host of Western countries attribute to the Kremlin.

It was sent to jail for 30 days on Monday after Russian prison services accused him of violating the terms of a suspended sentence, a charge that could see him locked up for more than three years.

The 44-year-old anti-corruption activist and political organizer has called for marches to protest his incarceration across Russia, which the Kremlin says is illegal.

Mr Navalny’s team called for protests to take place in cities across the country, regardless of the rejected demands.

Vladlen Los, a Belarusian lawyer from his foundation, was taken to a police station and sentenced to leave the country for more than two years, he said, while Lyubov Sobol, one of Mr. Navalny, was detained.

Videos posted on social media showed police visiting the homes of Mr Navalny’s spokesperson and other prominent supporters with documents warning them of their arrest if they continued to promote the rallies. Mr. Los was arrested and taken to the police station, he said.

Rozkomnadzor, the Russian communications watchdog, demanded that TikTok, the popular video-sharing app, and VKontakte, the Russian equivalent of Facebook, remove posts announcing the rallies, warning that they encourage minors to break the law. law.

Igor Denisov, the former captain of Russia’s national football team, posted a message calling for Mr. Navalny’s release, while videos posted on TikTok showed Russian schoolchildren replacing Mr. Putin’s portrait hanging in the classrooms with a photo of the activist.

Videos in the app tagged with the hashtags “Jan 23” and “Navalny Free” have over 100 million views combined.

Blogger @neurolera has taught users of English expressions to pretend to be American and not to be arrested. “If they try to push you into the paddy wagon, you say, ‘You are violating my human rights! “, Did she say.