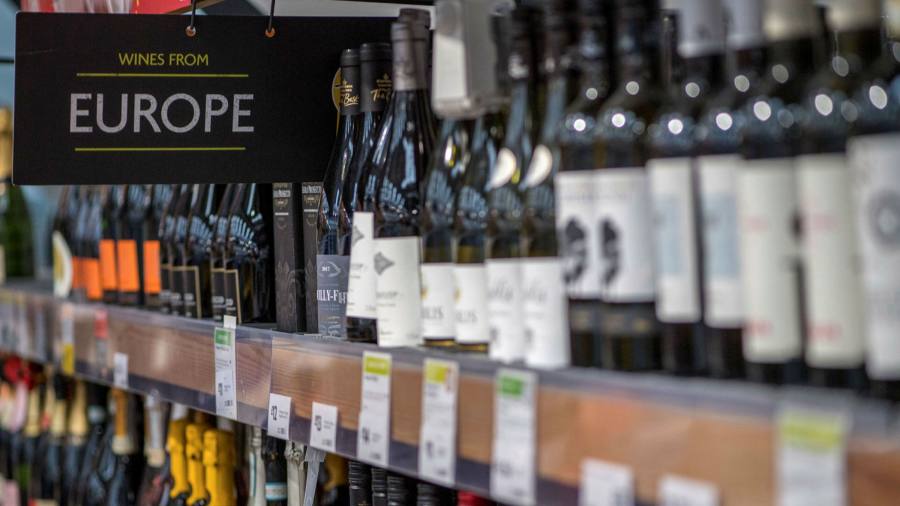 
British drinkers must pay up to £ 1.50 more per bottle for many European wines while choosing from a reduced range, traders have warned, as the burden of post-Brexit paperwork takes effect.

Importers said the cost of new customs declarations and certifications, along with higher transport prices, would hit the pockets of UK wine drinkers, while flat-rate costs per shipment pushed wholesalers to offer a narrower selection of bottles .

“We’re looking at a totally avoidable increase in the cost of wine across the board,” said Jason Millar, director of the Theater of Wine wholesaler. “Many importers will cut wines, not because they don’t believe in it. . . but because they don’t feel able to muster enough volume.

Daniel Lambert, a wine wholesaler who imports around 2 million bottles a year for UK retailers, said he estimated the post-Brexit bureaucracy would add £ 1 to £ 1.50 to the price of a bottle of wine from £ 12.

The Porto-based retailer, Portugal Vineyards, told customers this week that one of its best-selling wines in the UK, Vidigal Porta 6, which cost around £ 4.70 including taxes and postage , would now cost between £ 7 and £ 8.

Wine merchants said smaller wineries faced larger price increases due to fixed charges on each shipment, while the impact would be less for mass-market wines in supermarkets.

Some 28 million UK consumers drink wine at least once a month, according to Wine Intelligence. The country imports $ 4.4 billion in wine per year – over $ 3 billion from the EU, with France being the largest supplier.

Mr Lambert said the additional costs would result from the extra paperwork: an export document confirming that the wine leaves the EU costs around € 75, while a certificate that the wine is eligible for export duty-free customs clearance is also required.

Wooden crates must be checked for compliance with EU pest control standards, which many older vintages do not meet, said Ashley Hopkins, chief operating officer of global wine trading group Liv-ex. His company has identified eight separate new costs for bringing wine to the UK from Europe.

Mr Hopkins said much more detailed commercial invoices were needed, while an additional regulatory form – a substitute for the notorious Form VI-1, which the UK wine industry has successfully lobbied against – will be required from July, with new labeling next year.

When crossing the Channel, the wine then needs another certificate to declare its arrival to the British customs authorities. Mr Lambert said it will cost an additional £ 70, plus a monthly fee of £ 157 to access the highly bureaucratic CHIEF customs system.

Mr Lambert was also warned to expect a 30-50% increase in transport prices, which were around £ 180 per pallet of 600 bottles, or 30 pence a bottle, before Brexit.

Richard Burnett, director of the Road Haulage Association, said the estimate “may even be conservative” as trade friction escalates.

Wine merchants said import duties, VAT, and import and retailer margins would act as multipliers on the additional costs.

Mr Lambert said the new fee would add at least 45 pence to the cost of a bottle, depending on how demand affects freight charges and customs officials’ fees.

The new paperwork also causes delays. Lynne Raimbault of Sancerre producer Domaine Philippe Raimbault said some 4,000 bottles, mostly destined for Waitrose, have been waiting to be shipped since the beginning of January and would not be collected until at least mid-February.

Alice McLeod Dumas, a wine agent in France, said: “It’s the small producers who are going to be really affected. . . I dare say [the procedures] will settle down, but what will not go away are the document processing fees. “

Share
Facebook
Twitter
Pinterest
WhatsApp
Previous articleAndy Murray withdraws from Australian Open after failing to change quarantine
Next articleAaron Rodgers’ “ Beautiful Mystery ”: Will he end his career as an all-time greats or an all-time greats with multiple titles?
- Advertisement -