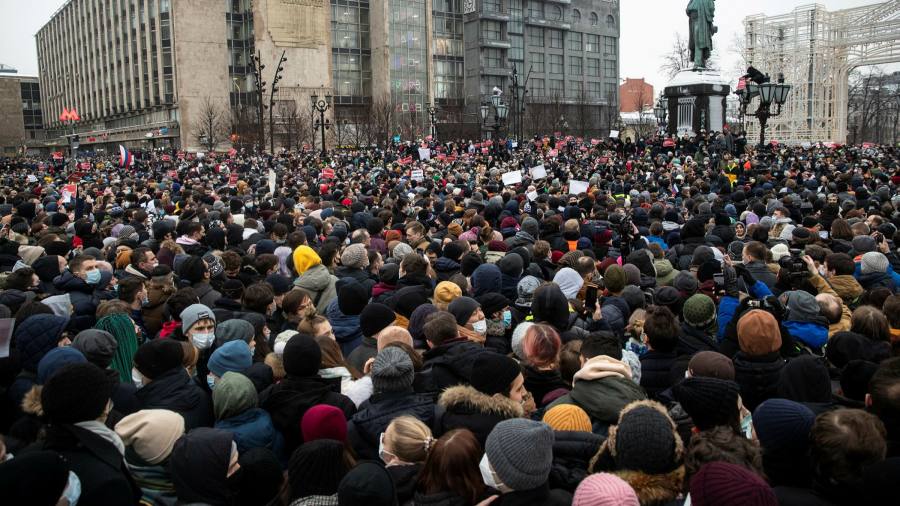 
Russian police arrested more than 2,100 people participating in peaceful rallies in support of jailed opposition activist Alexei Navalny Saturday, in a violent response to nationwide protests that are expected to be the country’s largest in years.

Mr. Navalny, the most prominent critic of President Vladimir Putin, was jailed this week on his return from Germany where he was recovering from an assassination attempt, he said he was ordered by the Kremlin, and called his supporters to organize rallies demanding his release.

Tens of thousands of Russians have responded by braving sub-zero temperatures, an often violent police response, and official warnings of a harsh crackdown to flood the streets of 107 cities across the country.

In Moscow – where police said 4,000 people had come to protest but Reuters estimated there were 10 times as many – crowds stretched for miles in all directions from central Pushkin Square, obstructing sidewalks and blocking traffic as they poured into the street.

As riot police armed with batons and bulletproof vests and balaclavas moved to stop them, some protesters pushed them back with snowballs or retaliated to release detainees from custody. In St. Petersburg, demonstrators broke through a police barricade and marched through the city.

State media said around 40 riot police in Moscow were slightly injured. The driver of a black car with government license plates and a VIP tag was hospitalized after protesters smashed his car and gouged out his eye, according to the official RIA Novosti newswire.

Police arrested 2,131 people at 4 p.m. GMT, including 795 in Moscow and 309 in St. Petersburg, according to independent watchdog OVD-Info.

Among them were Mr. Navalny’s wife, Yulia, and the main assistant Lyubov Sobol, who were arrested as soon as they arrived in the square. Ms. Navalnaya was released a few hours later.

Russian officials have opened several criminal investigations into the rallies, while authorities in Moscow said 19 people with coronavirus were present, making the rallies a health hazard.

I am fed up with all that. I’m 19, Putin has been in power my whole life, and I see no hope for the country

Schools and universities had warned students and parents of children as young as 10 not to attend the protests.

The Moscow bureau chief of consulting firm McKinsey’s, which has several government agencies and state-owned companies as clients, sent staff an email barring them from protesting or expressing support online at the rallies.

McKinsey later told the Financial Times: “McKinsey supports the right of its employees to legally and personally participate in civic and political activities in the countries where we operate. The recognition of these rights is without reservation. “

Several protesters said they had never attended a rally before, but were galvanized by the Kremlin’s treatment of Mr Navalny, who faces up to 13.5 years in prison on charges, he said, retaliation for exposing Russia’s alleged role in its poisoning.

“I am fed up with all that. I am 19 years old, Putin has been in power all my life and I see no hope for the country, ”said Anastasia, a student at a Moscow state university. “There is poverty and state terrorism. And what they did to Navalny is outrageous and illegal.

In Moscow, crowds chanted “Putin is a thief!” and “Free Navalny!” while passing cars sounded horns and howled Changes, a Soviet-era rock anthem popular with protesters in Belarus.

Before the start of the demonstration, squads of up to 10 officers rushed into the crowd and grabbed people, seemingly at random, causing cries of “Disgrace!” spectators.

Footage from the Russian Far Eastern city of Vladivostok, where thousands of people had gathered, showed riot police chasing protesters on the streets.

In Yakutsk, a city 8,000 km east of Moscow, police arrested 30 of the few hundred people who braved temperatures of -50 ° C to protest.

“I want Russia to be free. I support Navalny. I want a future for my children, ”said Svetlana, 60, retiree, attending the Moscow rally. “I really got it. Everything collapses. There is no health care and no pensions. I want things to change. “

Mr. Navalny’s team hopes that the scale of demonstrations, especially in cities in eastern and Siberia where anti-Kremlin activity is scarce, will pressure Mr. Putin’s administration to release him.

Mr Navalny was jailed for breaking the terms of a 2014 conditional sentence, which could see him jailed for three and a half years. He also faces a charge of fraud carrying a maximum sentence of 10 years.

The Kremlin, which denies any role in the August nerve agent attack on Mr Navalny that nearly killed him, said the rallies were illegal. Police preventively stopped Many collaborators closest to Mr Navalny this week to prevent them from attending the rallies and have warned social media companies that they will be prosecuted for failing to remove posts announcing the protests.

Moscow said so will ignore calls for condemnation of Western countries and their demands for Mr. Navalny’s release, describing him as a national problem.