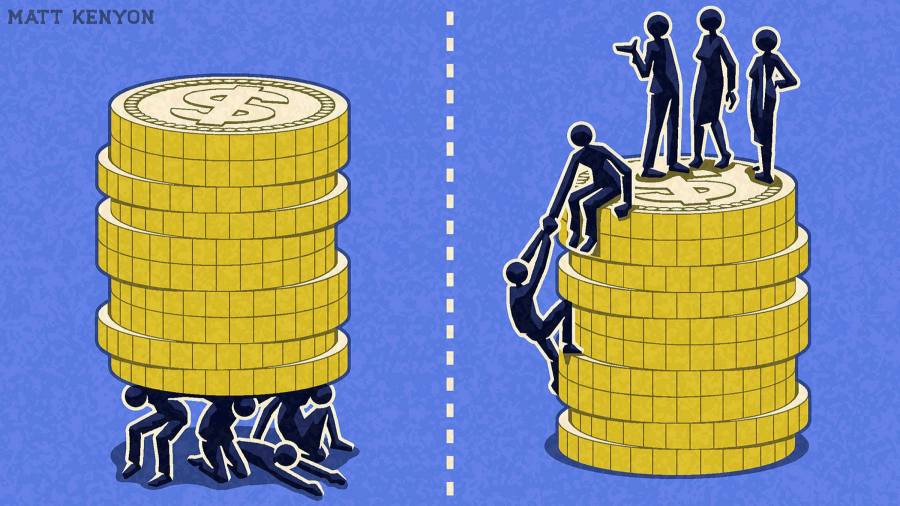 
“It’s time to reward hard work in America – not wealth.” This statement by US President Joe Biden is perhaps the most concise expression of the new administration’s economic policy plans. Mr Biden wants to raise the national minimum wage, raise corporate taxes and start tilting the balance of power between labor and capital.

The share of labor in national income – the amount of gross domestic product paid to workers, in wages and benefits – is declining in the United States and many other developed countries since the 1980s. The fall since 2000 has been particularly sharp, leading to stagnant wages, increasing inequality and loss of purchasing power for consumers.

But, in many ways, it’s a tough time for the Biden administration to turn the tide. With unemployment still high due to the pandemic, there is no natural upward pressure on wages. And some economists say intervening to raise the minimum wage now would discourage hiring.

Additionally, many businesses surviving the pandemic will seek to cut costs replacing workers with technology. Indeed, automation is one of the key factors in the decades-long decline in the labor share of GDP, according to a 2019 study by the McKinsey Global Institute.

However, there are three big reasons why we may still be at a key inflection point in the labor-capital divide in the United States.

First, the Biden administration comes from invoked the Defense Production Act to force the private sector to speed up vaccine production and distribution. This will immediately create more demand for jobs – a trend that could continue beyond the pandemic, as there are bipartisan calls to strengthen national supply chains for other pharmaceuticals and food.

Second, there is a trend towards increased unionization, especially in high growth sectors like technology. While the impact of a few hundred Google employees in California form a union should not be exaggerated – they still represent only a fraction of 100,000 employees – it was an important cultural marker. Union activists are now having similar discussions with other companies in Silicon Valley. Amazon workers in Alabama will vote on unionization in February. At the same time, global trade union organizations, such as the International Trade Union Confederation, are pushing the US and the EU to include provisions for workers’ rights in any new Big Tech regulations.

And the power of organized labor is likely to expand. Some policymakers believe it could play a role in helping individuals – not just workers, but also consumers – to regain the value of their personal data, by training “data unions“. These unions would act as independent monitors of the data pools, thus realizing their business value to members. While snippets of individual data aren’t worth much, data pools are – and a more equitable sharing of the intangible wealth held in that data could shift the balance of power between companies and individuals.

Third, the global demographic trends that have placed workers at a disadvantage are finally reversing – and, for workers in the United States, this could prove to be the biggest tailwind of all. As Charles Goodhart and Manoj Pradhan explore in their book The great demographic shift, the balance of power between labor and capital is a question of supply and demand. Over the past four decades, the full entry of baby boomers into the workforce, including an increasing proportion of women, along with the rise of China and other emerging markets, has created the greatest positive shock in labor supply never seen before. In view of this, a weakening of labor relative to capital was inevitable.

Now all these trends that have depressed wages so much for 40 years are being widely exploited. Birth rates in most countries are falling. Geopolitical and economic changes have led some countries, such as China, to create more independent supply chains. Baby boomers are getting older. All of this means that deflationary headwinds for labor are finally abating.

In addition, an aging population will make the healthcare industry a huge net creator of jobs. While roles in remote diagnostics – what is known as ‘telemedicine’ – can be outsourced to low-wage countries like India, most positions in health are contact jobs. narrow that cannot be sent overseas. No wonder six of the ten jobs that the US Bureau of Labor Statistics hope to grow faster in the next decade are in nursing, therapy and care services.

These jobs are part of what the new Biden administration has dubbed “the benevolent economy”- a key element of the economic campaign. The president proposed to strengthen not only health care for the elderly, but also childcare for families – another task that cannot be outsourced. He suggested that the expenses could be paid by closing loopholes in real estate transactions.

Of course, rising labor costs would affect corporate profits. But, in rich countries – where consumer spending makes up the majority of the economy – businesses should also benefit. So there is much to be gained from a rebalancing of power between labor and capital.