Joe Biden must choose between unity and change 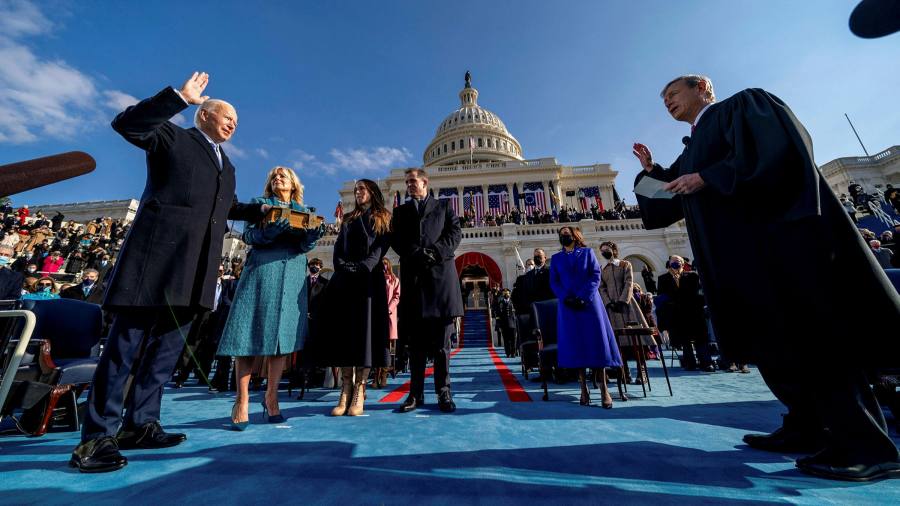 
For once, Joe Biden was less sentimental than his audience. The inauguration of the American president last week sparked a media surge that had since been suppressed, well, a Democrat last held the White House. One broadcaster saw the parallel lights of the National Mall as the presidential arms “embracing America”. For others, it was the first lady’s moving gaze on her husband that moistened the eye. Cooing on a poem still hasn’t stopped.

There are at least two problems with such gooey enthusiasm. First, it confirms the suspicions of conservative Americans. Their image of the liberal elite as schemers against the people is false and dangerous. But even the slightest accusation – that his critical faculties melt into slush when Democrats rule – has been hard to refute since adult men spoke of “Camelot” in the John F. Kennedy years.

The other problem with last week’s outpourings is the surge of impossible hopes. The Liberals applauded Mr. Biden’s call to national unity. They also celebrated his vision of gradual change. It suffices to name these two projects in consecutive sentences to bring out their irreconcilability. If Mr. Biden intends to be the most left-wing president since the 1960s (some commentators, weighing his politics, say the 1930s), it will alienate Republicans and divide the United States. If, according to his career so far, national unity is the highest dream, then he must give up or dilute much of his national program.

To be clear, either choice is honorable. But it is a choice. There will be no bipartisan radicalism.

To get a feel for the relentlessness of the Republicans, consider, if you can take it, the mysteries of the Senate. Mitch McConnell, the party cunning leader there, wants Democrats to commit to preserving filibuster. Without assurance on the scheme, which effectively forces non-financial bills to win a supermajority, he threatened to delay the motion that gives Democrats full effect. room control. In other words, he used counter-majority means (the postponement of a democratic Senate) for counter-majority purposes (systematic obstruction).

This shamelessness came after a electoral defeat, a Capitol seat in which Republicans have inadvertently been complicit and an olive branch from an inaugural address by a beloved new president who doubles as a personal friend of decades standing. If that is the Republican posture now, imagine it next year, when the administration is tainted and the Conservative shame about the Donald Trump era is gone. Or even next month, when the Senate is due to try the former president for incitement to insurgency.

Not only will there be no Republican aid in the expansion of the state, but another To taste – but coarser than the first – is on the cards. The expansion of Medicare and a 28% corporate tax rate will be presented as Maoism: ridiculously but, for millions, convincingly. These and other Biden policies probe well. But if we have learned anything in recent years, it’s that a fierce minority can shake a nation. Those who urge the new president to leave hard and fast, and there are many, you should know that this will nullify the promise of civic peace which is otherwise its selling point.

The left’s best argument against Biden’s candidacy has always been tactical, not ideological. He postulates that a man who entered Washington in 1972 never really adapted to the rise of partisanship. Such is his confidence in the good faith of his adversaries that he would be easy meat for them. Such is his dedication to the unity of America, that he would prefer a bland presidency to a provocative one. His half-century in public life seems to prove them right. But the platform he ran on and still marry does the opposite. The next four years hinge on Mr. Biden’s truest – the Bold Manifesto or the Emollient Tone – and whether he’s even aware of the tension.

“With unity, we can do great things,” the president said, in a line that is no more fair for his gentleness. Outside of the war, or in fact fight against the pandemic, it is precisely without unity that great things are done. The New Deal sowed discord even with Franklin Roosevelt, the politician of the century, who led it. Civil rights were so controversial that they changed the electoral geography of the nation.

There is no harmonious path to the kind of society Democrats want to build. After the Trump years, they are entitled to their mawkishness on the prospect of unity or the prospect of reforms. But not both.