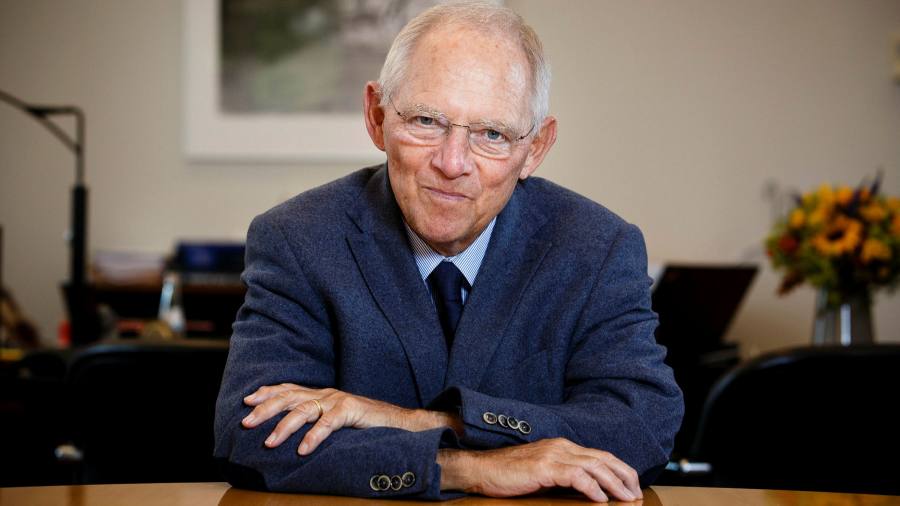 “There is a lack of real progress, a lack of efficiency in the execution of [reform programmes] in the Member States, ”Wolfgang Schäuble told the Financial Times. “These difficulties worry me.”

Mr. Schäuble, who is president of the Bundestag, said the EU had spent too much time discussing the size of the fund and how the money should be distributed, and not enough “thinking about what to spend it”.

“We should have long ago defined in which areas Member States should invest these funds – artificial intelligence, digitization, policies to combat climate change,” he said. “I hope we can do it faster.”

His remarks coincide with those of other EU officials who fear member states will be dragging their feet to submit detailed proposals on how they intend to spend the fund’s money.

While he was German Finance Minister, between 2009 and 2017, Schäuble came to symbolize the fiscally hawkish policies pursued by the euro zone in the aftermath of the global financial and sovereign debt crisis. He was famous in favor of Greece’s suspension from the single currency in 2015.

But since the pandemic broke, he has abandoned his more conservative views on fiscal policy and embraced the EU’s extraordinary efforts to save the bloc from economic collapse.

The centerpiece of these efforts is the stimulus fund, which will see the European Commission issue unprecedented levels of debt and distribute them in the form of 390 billion euros in grants to member states. Mr Schäuble said this was the “right answer” to the coronavirus crisis.

But the commission linked the release of cash from the recovery fund to Economic reforms designed to bring lasting improvements to the growth prospects of recipient countries and, in particular, to stimulate innovation, digitization and facilitate the transition to a green economy.

EU countries have been asked to submit detailed reform plans to Brussels by April, indicating how they plan to use the fund’s loans and grants. The commission will then examine the reforms with the aim of starting disbursements from the second half of 2021.

Valdis Dombrovskis, vice-chairman of the commission, said last week that disbursements would be conditional on reaching “specific and measurable milestones” and that “a lot of work remains to be done”. Some Member States, he said, needed to be more specific in defining exactly which events would trigger payments.

Mr Schäuble expressed concern about how the recovery fund money would be spent, adding that the committee had only “limited competence” to check how member states were investing their allocation. “But when you ask what is really going on with the money, it can even lead to government crises, as we see in Italy.”

Earlier this month, Matteo Renzi’s Italia Viva party withdrew from the Italian coalition government by Giuseppe Conte after complaining that he did not want to spend the roughly 200 billion euros that Italy is expected to receive from the recovery fund.

Mr Schäuble said he was concerned that the programs presented by each country were not ambitious enough. “We know very well what urgent measures each country must take to make the European economy stronger, more innovative, more dynamic and better able to be competitive on a global level”, he said.

But it is not only the countries of southern Europe that have come under fire for the reform plans they have submitted to Brussels. According to officials in Berlin, the commission is also unhappy with Germany’s initial proposals and, in particular, the lack of enthusiasm it has shown to reform its pension system.

Mr Schäuble also referred to the EU’s decision to make it easier for Member States to cope with the economic effects of the pandemic by canceling the Union’s budgetary rules until the end of 2021. The committee used a supposed safeguard clause to suspend the application of the Stability and Growth Pact, which caps debt levels at 60% of gross domestic product.

In the past, Mr Schäuble has always opposed attempts to relax the SGP rules, but he is now more open to the idea. He said he sympathized with those who say the pact should be reformed before it was reintroduced. “After the pandemic, a lot of things will be completely different from what they were before,” he said. “Whether they are better depends on us.”

The recovery fund proved controversial in parts of Mr Schäuble Christian Democrat Union: Many party hawks only accepted it on the principle that the commission’s debt issuance is a one-off operation that will never be repeated. Olaf Scholz, German Social Democratic Minister of Finance, on the other hand, hailed him as “Hamiltonian moment”, citing the first U.S. Treasury Secretary who helped create the U.S. fiscal union by assuming state debts in 1790.

Mr Schäuble said such an analogy was inappropriate. “I just hope nobody really knows what the Hamilton effect was,” he said. Such rhetoric “only strengthens the resistance of those who fear their national identity will be lost in European integration – which nobody really wants anyway”.

Mr Schäuble said those seeking closer cooperation in the EU and the euro area should exercise caution. “For what you want to achieve in Europe, you have to organize majorities,” he said. “You cannot build Europe against the will of the people.”

But he indicated that he himself did not see the recovery fund as a one-time fund. He said he had never completely ruled out the idea of ​​common European bonds, “because I know very well that an economic and monetary union must have them”.