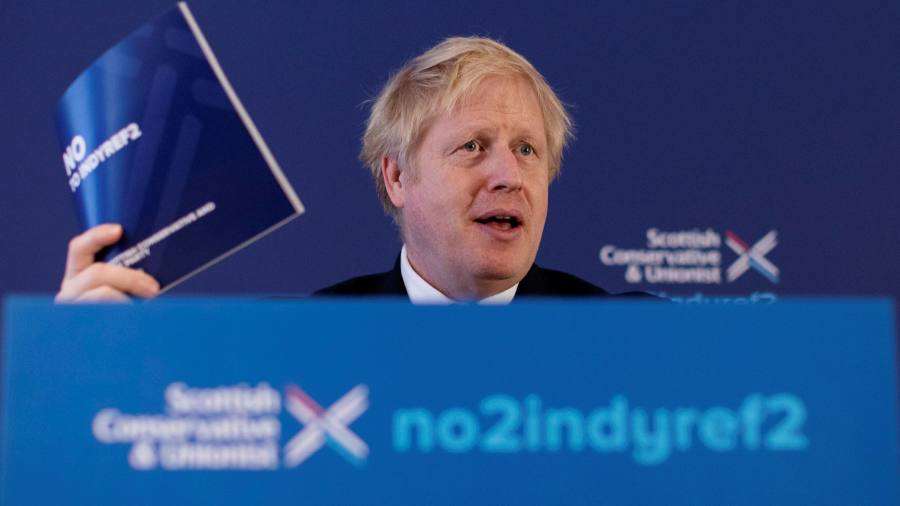 
Boris Johnson will travel to Scotland on Thursday to try to support independence, as ministers scramble to persuade the Scots of the benefits of remaining in the 313-year union with England.

Prime Minister is expected to focus on the vaccination effort to highlight the role of the whole of the UK in what has so far been one of the most successful Covid-19 inoculation programs in the world.

Meanwhile, ministers in London are seeking to bypass the Scottish National Independence Party government in Edinburgh by funding certain “British projects” north of the border directly from London.

But as Mr Johnson wishes to remind Scotland that the British Treasury has backed economic support programs during the coronavirus crisis, some ministers are concerned over a strategy portraying the Scots as beneficiaries of London liquidity.

Alister Jack, Secretary of Scotland, told Tory MPs at a Burns Night event on Monday that Scots should ‘feel valued as partners in a common endeavor rather than simply as a beneficiary of British largesse », According to a person present.

A former Conservative minister criticized the government’s strategy to counter the SNP, saying, “I don’t think there was a coherent strategy on the union.”

He added that the cabinet was divided between those like Cabinet Minister Michael Gove, who wanted to work in collaboration with decentralized administrations, and others who were looking for more “muscular” unionism. “I think that’s where a lot of Boris’s instincts are – the idea that we should tell Scots why the union is good for them, ”said the former minister.

In his speech to the Scottish Conservative Conference in November, Mr Johnson suggested removing powers from the Edinburgh parliament and reallocating them to local authorities and communities.

Mr Johnson’s visit to Scotland comes after opinion polls over the past year have suggested a majority of voters in a Scottish referendum would support independence.

A Panelbase poll for the Sunday Times put support for independence at 49 percent, with 44 percent opposing and 7 percent undecided.

The poll also found that only 22% of Scots believed Mr Johnson had done a good job on Covid-19, compared with 61% for Nicola Sturgeon, First Minister of Scotland.

Ms Sturgeon on Wednesday called on Mr Johnson to “lead by example” by refraining from unnecessary travel. The Prime Minister’s allies have said his visit to Scotland will be secured by Covid, as with other events in the UK.

Some Tory politicians are hoping that spending more money directly in Scotland – and clearly naming the resulting projects with the union jack – will help build support for the UK government.

Legislation approved last year allows Westminster to bypass devolved administrations in Scotland, Wales and Northern Ireland to spend funds on infrastructure, education and all cultural and sporting activities which ministers say British, “will directly or indirectly benefit the UK”.

The UK government is already partly funding the so-called towns agreements to support economic growth in Scotland, but is doing so in cooperation with Scottish ministers. Chancellor Rishi Sunak is also promoting a series of freeports across the UK, including Scotland, which ministers hope will become hubs for high value-added manufacturing and innovation.

Mr Gove, who is leading the cabinet fight to save the union, is focused on defending British and British identity more broadly, rather than devolving more power to the Scottish Parliament.

A review by Andrew Dunlop, a former Scottish office minister, on how to make the union run more efficiently can be found on Mr Gove’s desk. Completed in November 2019, Mr. Gove has promised to release it soon.

Ms Sturgeon has pledged to try to hold a second independence referendum if the parties that favor it control the Scottish parliament after elections scheduled for May. Mr Johnson insists that UK approval is required for such a vote and that he will not give it.

Iain Anderson, executive chairman of Cicero, a financial advisory firm and former conservative adviser, said companies “are increasingly interested” in the future state of the union when making investment decisions.