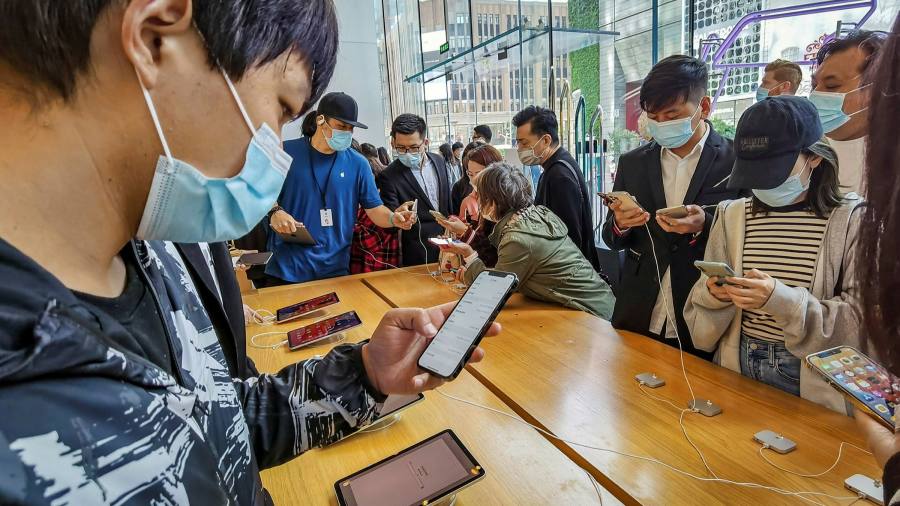 
Apple reported its highest ever net profit in the holiday quarter, as revenue greatly exceeded expectations to reach $ 111.4 billion thanks to a 57% increase in sales in Greater China.

“We couldn’t be happier with the December quarter and we couldn’t be more optimistic about the future,” Luca Maestri, Apple’s chief financial officer, told the Financial Times.

The $ 2.4 billion company’s five product categories grew at double-digit percentages, driven by a 41% increase in iPad sales and a 30% increase in wearable devices, which include AirPods. and the Apple Watch. the iPhone – whose sales rose 17% from a year ago to $ 65.6 billion, reflecting 59% of Apple’s revenue – was the group’s slowest accelerating category due supply constraints and the delayed launch of its first 5G compatible smartphones.

It is all the more remarkable that “Apple shipped the most smartphones ever produced by any vendor in smartphone history, ”according to Francisco Jeronimo of IDC.


Apple revenue in Greater China for its first quarter

Apple no longer discloses unit sales, but Mr. Jeronimo estimates the company shipped 90.1 million iPhones in the quarter, breaking a long-standing record of 88.5 million units of smartphones shipped by Samsung in the first quarter of 2014. It estimates the average selling price was $ 728, down from $ 869 a year earlier.

“Apple is championing the sales of 5G and this will be the catalyst for the adoption of 5G in many countries around the world,” said Mr. Jeronimo.

However, the company’s shares fell more than 3% in after-hours trading. “It’s fair to say it’s a ‘sell-on-news’ situation,” said Scott Kessler, analyst at Third Bridge, a research firm. “There is no doubt that the results are strong everywhere, both operationally and financially.”

A disappointment for investors is that Apple declined to provide guidance for the March quarter, citing uncertainties around the pandemic.

“It’s getting very easy for things to get really tough, very quickly,” Maestri said, adding that many Apple stores remain closed in the Americas and Europe.

Apple has also not released new forecasts on how its services division will grow over the next several years, after meeting its previous goal of doubling service revenue between 2016 and 2020, six months ahead of schedule.

“Everything But iPhone” revenue grew 28%, a new all-time high that underscores the success of the Mac computer, AirPods headphones, and Apple Watches, as well as relatively low fees for its services – such as The $ 9.99 monthly cost of the Apple Music streaming offering – adds up when marketed to one billion iPhone users.

“You can’t even name all the departments with one hand anymore,” Kessler said.

Chief Executive Tim Cook added in an earnings call that China is more than just an iPhone story, as sales of iPads, Macs, wearables and accessories were all above average then. as the economy recovered from the pandemic.

China demonstrated in the last quarter that it “is sort of beyond Covid,” he said. “They were really in the recovery phase. This quarter there are various reports of some cases in some locations and lockouts, but we have yet to see this in our businesses. “

In November, Apple introduced two laptops and a desktop Mac Mini equipped with the M1 chip designed by the company, which had the potential to attract more consumers. “The M1, I think, gives us a new growth path that we haven’t had in the past,” he said.

Regarding Wearables, the Apple chief said, “We brought this thing down from zero to a Fortune 120 company, which was no small feat, but I still think we’re in the early stages of these. products. “