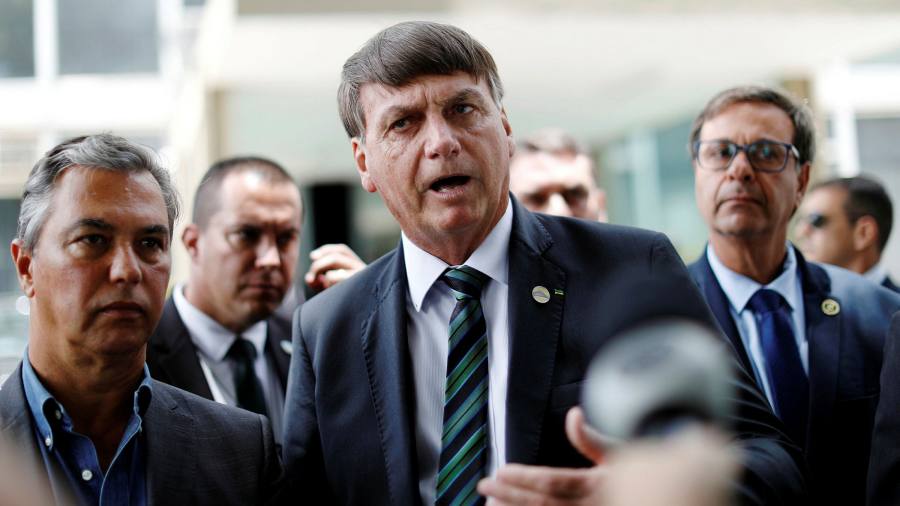 
Brazilian President Jair Bolsonaro kicked off the new year with a frank admission: “Brazil is broke. I can not do anything.

Latin America’s largest economy softened the initial economic blow from the coronavirus last year with a massive stimulus package worth more than 8% of gross domestic product, causing production to contract less than 5%, considerably more low than other countries in the region.

But that leaves Brazil with a government debt of over 90% of GDP, the highest total debt of any major developing economy other than China, and investors are worried about its prospects.

Rising unemployment, the uncontrolled spread of the coronavirus and delays in vaccination programs, as well as the government’s hesitant reform agenda, are expected to contribute to a disappointing recovery this year. The IMF predicts that Brazil’s GDP will grow 3.6%, still leaving it well below its pre-pandemic level.

And as Mr Bolsonaro recently asserted, there is little wiggle room to spur that with a new round of stimulus. An expenditure ceiling introduced in 2016 limits public expenditure to expenditure of the previous year, adjusted for inflation. It has become a key signal to investors that public finances are under control.

“There is a huge demand in society for more social spending and public investment. [But] We don’t have a place for it, ”said Solange Srour, chief economist at Credit Suisse in Brazil. “Investors are wondering about the sustainability of [Brazil’s] debt. They understand the fragility of our accounts. . . The biggest challenge this year is not going over the spending limit. ”

The halt in stimulus spending will be hit hardest by Brazil’s large informal sector, which has tens of millions of citizens who are not recorded in official employment data but who have received monthly cash allowances. last year as part of the pandemic relief effort. It is also likely to impact the country’s official unemployment rate, which is now 14.1 million, down from 12.3 million before the pandemic.

“There is no recovery in employment and no prospect of recovery. The only reason the unemployment rate has not increased further is that people have not returned to the workforce that much. And the segments that suffer the most are those of the informal economy, ”said Silvia Matos, coordinator at the Brazilian Institute of the Economy. “The service sector is also still far below the pre-crisis period.”

Luciano Rostagno, chief strategist at Mizuho Bank, said much would depend on the government’s ability to stem the second wave of coronavirus and effectively roll out its vaccination program.

“The spread of a second wave of Covid-19 and delays in vaccinations can trigger precautionary savings behavior, pushing consumption down further,” he warned.

As a result, most economists agree that there cannot be a complete stop to crisis financing.

“Brazil’s outperformance last year has a lot to do with huge fiscal stimulus. This is going to be pulled at a time when private demand is not ready to take over, ”said William Jackson, chief emerging markets economist at Capital Economics.

One way to get around the dilemma would be for Congress to pass an emergency constitutional amendment reducing government spending obligations – primarily public sector salaries and pensions – which consume nearly 95% of its budget.

However, Congress, which returns from recess next week, is fiercely protective of public sector benefits, so passing such legislation would not be easy.

It would also be politically unpopular. The closer the country gets to federal elections next year, the less Mr. Bolsonaro will spearhead economic reforms that could cause economic hardship for some of his constituents. Looming polls mean the president may be tempted to revert to stimulus spending to boost his popularity.

“With the rise of the pandemic, it is only natural that the discussion about the benefits will return. [But] The government’s concern goes beyond the economy and affects the president’s declining popularity, ”said Sergio Vale, chief economist at MB Associados.

This leaves investors thinking about their willingness to continue financing public spending.

Most of Brazil’s debt is in local currency, which means the country can avoid the type of external debt crisis that has plagued neighboring Argentina. But there is still the possibility of a domestic market crisis if investor concerns grow.

“When the foreign investor looks at Brazil, he is concerned about the economic situation and the business environment,” said Paulo Feldmann, professor of economics at the University of São Paulo. “Transport is very expensive, energy is expensive, the tax burden is high. It scares businesses, especially when the economy is deteriorating and unemployment and inflation [are] rising.”

Ms. Srour of Credit Suisse said that “the most important thing is [Mr] Bolsonaro to improve the articulation of policies in Congress, ”emphasizing the president’s acrimonious and unproductive relationship with the legislature.

“It shouldn’t be difficult for Brazil to grow 4 percent this year, but we have to send a signal that the accounts will be kept under control and that depends a lot on the executive,” Ms. Srour said. “[Mr] Bolsonaro must do more. “