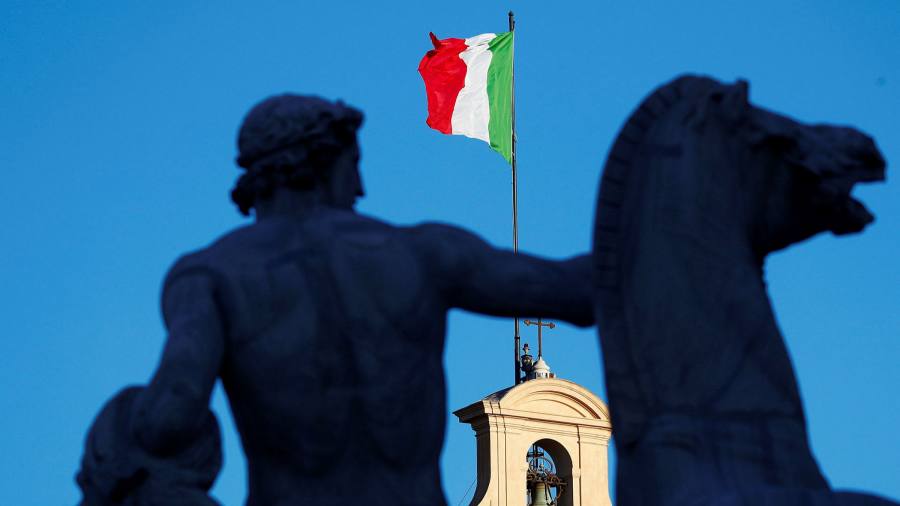 
Italy, a country that has seen 66 governments since World War II, is wearily accustomed to political uncertainty.

Yet the instability caused by the resignation of Prime Minister Giuseppe Conte this week comes at an unusually delicate time. Not only is Italy grappling with the Covid-19 pandemic and a severe recession, but it is also developing ambitious plans to revive the country’s economy by spending € 200 billion on subsidies and EU loans. recovery fund.

The stakes are high. Domestically, Italy is seeking to restore an economy that, even before the current crisis, had never fully recovered from the post-2008 recession. Its success or failure in utilizing the largest share of the EU’s 750 billion euro stimulus fund is also likely to define what has been hailed as a pivotal moment in pan-European solidarity. But Rome risks falling behind other countries, including Spain, in drawing up recovery plans due to the political turmoil it is currently going through.

“We are at a critical moment,” said Valentina Meliciani, director of the Luiss University School of European Political Economy. “The question of whether a stable government can now be created will determine how EU money is spent. It is a great opportunity for Italy, but the price of failure is enormous and the consequences would go beyond our country ”.

On Wednesday, Italian political parties began a series of consultations at the behest of President Sergio Mattarella to see if a new majority government could be formed from the current parliament. Mr Conte is expected to try to forge a new coalition to allow him to be re-elected as prime minister as his former allies have said they want to stay with him.

If Mr Conte is unable to do so, then Mr Mattarella will see if a new coalition can be formed without him, or perhaps even a government of national unity involving right-wing opposition parties from the country.

The current political crisis started with a disagreement over how the EU’s stimulus money would be spent. Former Prime Minister Matteo Renzi withdrew his small Italia Viva party from Mr Conte’s coalition after accusing him of mismanaging spending plans, stripping him of his majority in the Italian Senate and ultimately forcing Mr Conte to resign this week.

Mr Renzi is not the only critic of the government on the issue, however. This week Carlo Bonomi, president of the Italian trade association Confindustria, raised concerns over the lack of detail in current proposals and the lack of structural reforms that the EU will want to see as proof that money is spent efficiently.

“In a political situation like the one we live in [it] It is difficult to see how we can have a government that has the strength to make decisive reforms, ”Bonomi said. “The EU expects major structural reforms from this country which have not been carried out. We must not waste time in the face of a historic opportunity to make this country more modern ”.

As Mr Conte is now trying to build a new government, discussions are already underway between the European Commission and member states on the draft plans, with the aim of submitting final proposals by April 30.

The draft plan that Rome released shortly before Mr Renzi removed his ministers from the Conte government lacked all the details on the reforms and delivery steps the final version will require.

The committee expects Italy to come up not only with investment proposals, but also reform proposals – coupled with a timetable and milestones – in politically sensitive areas. Brussels has, in its regular cycles of economic surveillance over Italy, recommended reforms to the country’s pensions and judicial system, as well as efforts to stimulate competition.

Once the final plans are submitted, the committee will have two months to conduct its formal assessment of the proposals before approving them. Member States then have an additional month to give their own approval. Concretely, this means that officials do not expect the first cash disbursements from the collection fund to occur until June.

Lorenzo Codogno, former chief economist at Italy’s Treasury, said Italy is under pressure to show that it will spend the money efficiently or risk being presented as an example of the project’s failure by more skeptical countries from northern Europe.

“Many skeptical countries remain skeptical. If it’s a failure, then at some point they’ll say ‘I told you’, ”he said.

The main risk, argued Mr Codogno, is that sufficient reforms in areas such as public administration and the Italian judicial systems have not been carried out alongside the spending of European money, which means that its long-term impact on the revitalization of the Italian economy would be diluted.

“Politicians get excited when they have money to spend, but it’s very dangerous,” he said. “There is a risk of misallocation of resources.”

Ms Meliciani, however, said that the current political crisis could serve to concentrate minds in Rome. If, she argued, the situation can be resolved by finding a stronger government with sufficient parliamentary support to push through reforms, the more likely the stimulus money will be well spent.

“If we can form a stable government then it will be good news to spend the money the right way,” she said. “This crisis could also be an opportunity.”