Olive is the new green in the fight against climate change 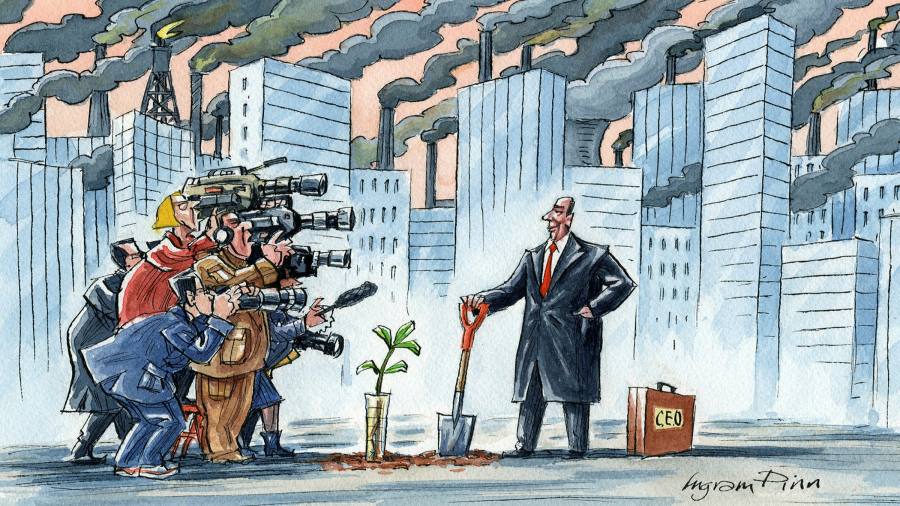 On Tuesday, BlackRock said it would require all companies demonstrate plans to achieve zero carbon by 2050. On the same day, participants in the Virtual World Economic Forum released pious climate commitments.

On Wednesday, Mark Carney, former Governor of the Bank of England, and Bill Winters, Director of Standard Chartered Bank, is committed to boosting the carbon offsets market. US President Joe Biden too suspended the issuance of new permits for oil and gas drilling on federal lands.

Meanwhile, ExxonMobil, America’s largest oil company, is considering further cuts in fossil fuel investment and more spending on sustainable technologies. This change, which comes as the company is under pressure from activists, is arguably the most surprising of all. Exxon has so far been so intimately linked to fossil fuels that it has been a major target of environmentalists.

As the green train picks up speed, it’s time to consider a linguistic overhaul. When a teenage activist Greta Thunberg burst onto television screens a few years ago, it demanded an immediate shift from carbon-emitting activities, such as fossil fuels, to sustainable ones.

This “brown” against “green” framing was admirably clear. Ms Thunberg also has a knack for irritating middle-aged executives, so she deserves to be commended for shifting the debate. This is all the more true as it has also fostered the understanding of a crucial concept: our globe has a measurable carbon “budget” that limits the emissions that the planet can tolerate before irreparable environmental damage occurs.

However, the question now is not to divide the world into binary buckets of “green” and “brown”, as campaigners still demand and the new taxonomy of the European Commission is trying to do. Rather, it’s about making the current brown activities less damaging and as quick as possible; indeed, create a mixture of greenish brown.

So, it might be better to call 2021 “Year of the Olive Tree”. What really matters now is how quickly ‘olive’ companies are turning their businesses a lighter shade of green, and doing so in a way that can be credibly measured.

Take the activists’ battle at Exxon, which sounds like a story of Green David vs. Brown Goliath. The oil group was one of America’s largest and most respected companies. The activist, Engine No. 1, was created last month and owns only $ 40 million in Exxon shares.

However, his “Reenergize Exxon” campaign won the support of Calstrs, California’s massive teachers’ retirement plan. DE Shaw wants spending cuts and BlackRock could back the activists. This is because engine # 1 includes the olive. He is not asking for an immediate stop of drilling, but for a credible plan for Exxon to become net zero, fairly quickly.

Exxon officials, of course, say they’re already working on it. Their corporate website trumpets investments in carbon capture technology and other emission offsetting strategies. In this regard, he is not the only one. Many other companies also talk about carbon offsets, which often involve planting forests. This is partly because trees are telegenic, but also because groups such as Salesforce have launched an eye-catching “trillion trees” campaign.

Offsets can be a useful addition to decarbonisation plans. But there has been woefully poor reporting and greenwashing in this market. So MM. Carney and Winters are now trying to put him on a more believable path. Hope they are successful.

Meanwhile, the group “Reenergize Exxon” is rightly angry. Offsets cannot be more than a small part of a solution. It is just as, if not more important, to finance new technologies, like Bill Gates did last week. Offsets such as tree planting also cannot become a distraction from the key task of making appropriate cuts to emissions-heavy activities.

What Engine # 1 wants Exxon to do is show precisely how it will quickly become a shade of greener olive, cutting oil and gas activities and embracing renewables.

This approach will not satisfy the purists, who want “green now” and oppose any funding below that. But it is more likely to work. These days, investors are increasingly giving a price premium to companies that move faster along the olive spectrum than their rivals. Financiers are also developing instruments that reduce the cost of capital for greener groups.

Call it, if you like, an emerging olive yield curve. As such, it is welcome – with two caveats. First, it’s not enough for companies to tiptoe around this yield curve; carbon budget calculations mean they have to act quickly. Second, investors need a credible system for putting companies on an olive yield curve and measuring their progress.

In this regard, it is disappointing that BlackRock was vague this week on how it will measure the credibility of companies’ plans to achieve zero carbon. It is also puzzling that the European Commission’s green taxonomy seems centered on a rigid and binary framework and that it takes so long to harmonize sustainable accounting standards.

If we are to make real progress in the fight against climate change, it is essential to recognize the need to adopt an olive framework, to follow the movement of a business along an olive yield curve and to accelerate its transformation. It will take much more than planting trees, however telegenic they may be.