Vote for the second round of IGN’s Super Movie Madness! 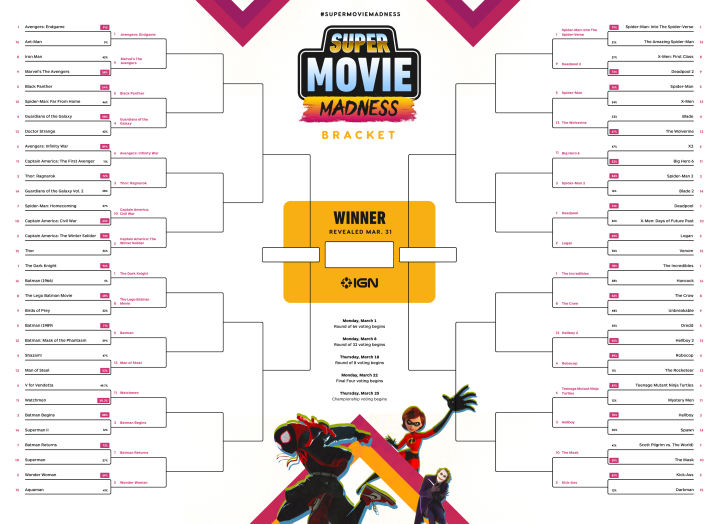 
With 32 films remaining in our quest to crown the greatest superhero movie of all time, here are a few things that jumped out at us in the first round.

Nine of the 32 first round matches ended in a surprise, and two 13 seeds beat the odds for progress. 13th seed Man of Steel narrowly beat 4th seed Shazam by 5 percentage points, with Snyder’s loyal following largely on Twitter. Additionally, 13 seeded The Wolverine shockingly hit 4 Blade with 66% of the vote. The vote was skewed in favor of The Wolverine on all channels except IGN.com, where it was slightly closer.

These are the # 1 seeds for a reason

There were no surprises with our best seeds, with The Dark Knight vs. 1966’s Batman and The Avengers: Endgame vs. Ant-Man culminating in the biggest blowouts of the round. Endgame and The Dark Knight garnered over 90% of the total votes, and we don’t expect either to meet their round of 16 match.

Two battles we keep our eyes on in the Round of 16 are Guardians of the Galaxy 4 vs. 5 Black Panther in Marvel Support and 2 Logan vs. 7 Deadpool in Non-MCU Marvel Support. Judging by the vote in the first round, it could really go both ways.

Second-round voting begins now and ends Friday, March 12 at 11 a.m. PT. Super Movie Madness is just starting to heat up! After you’ve voted, be sure to check out our breakdown of how action scenes can make a superhero movie awesome.

Indie / other great movies – 2nd round