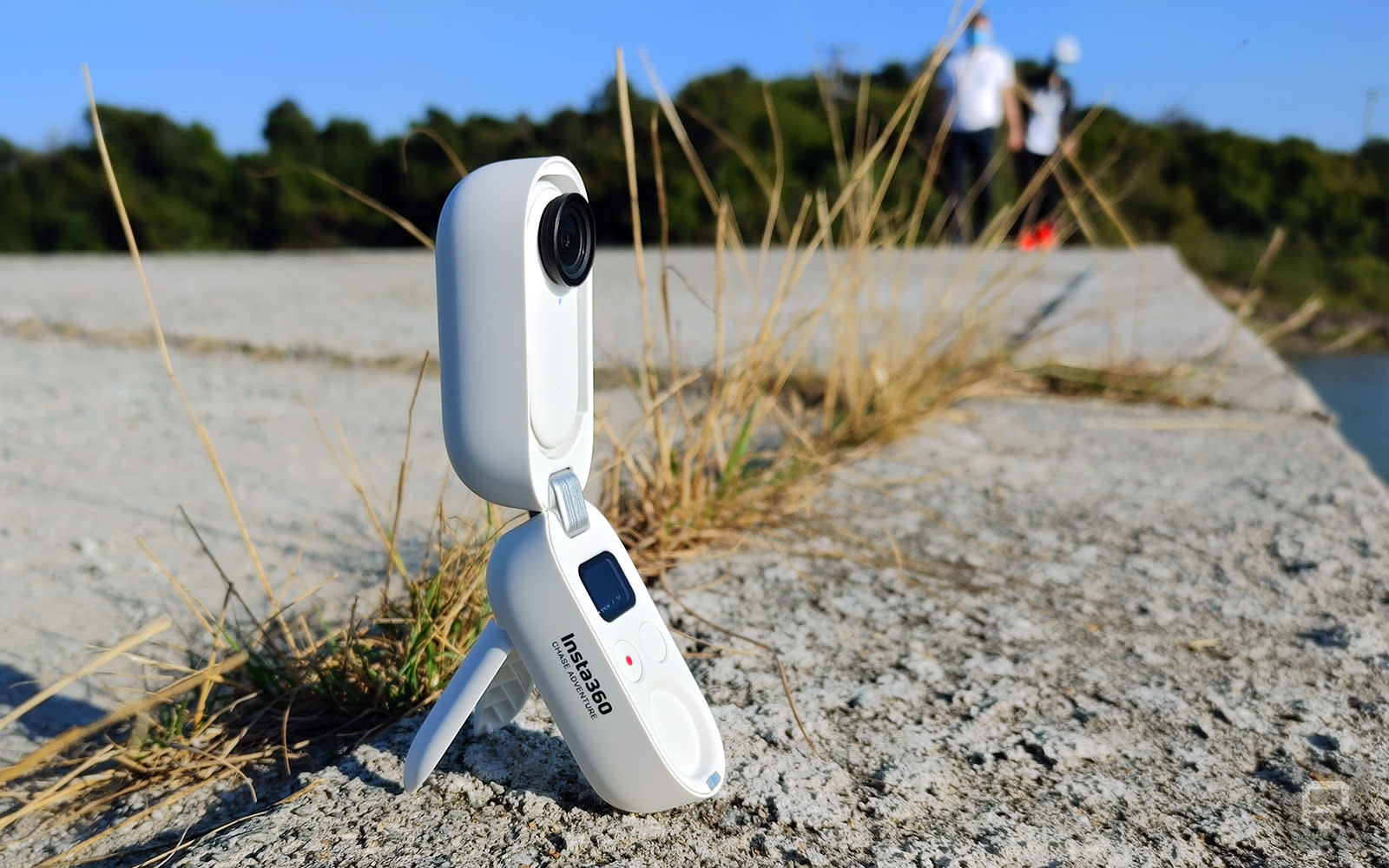 
Following a pair of solid 360 cameras, Insta360 is back in the action camera space with another “world’s smallest action camera”, the Go 2. While this thumb-sized magnetic camera bears a strong resemblance with her predecessor, it’s actually a bit bigger and comes with a lot of handy improvements. In particular, the camera now supports much longer clip lengths – up to 10 minutes with FlowState stabilization or up to 15 minutes with basic stabilization. This is a very welcome change, given that the original Go only had a 30-second limit per clip at launch, the assumption being that people would only need to shoot smaller-sized clips (a 60 second mode was added later). Now that the time limit is all but gone on the Go 2, users naturally have more creative freedom.

Other notable changes include a much improved click button that is now placed on the front panel, as well as an increased standalone runtime from 20 minutes to 30 minutes (1440p30 base stabilization video). And instead of just being splash-proof (IPX4), the Insta360 Go 2 has an IPX8 waterproof rating, which means you can take it down to 4 meters deep right out of the box.

As before, the Go 2 comes with a handful of accessories to allow for different scenarios. The package includes a redesigned swivel mount with a reusable sticky pad, an easy clip that finally allows you to adjust the angle, a magnetic pendant to wear the camera on your chest, and a replaceable lens cap that comes preinstalled on the camera. If needed, there is the optional magnetic mount to go with other action camera accessories, as well as the action mount if you need to tighten the camera firmly for more intense sports. You can also disable the lens cap with an optional ND filter.

The charging case here has undergone a major overhaul, in order to double as a Bluetooth remote and kickstand – very handy for timelapse videos or just quick selfie videos. Its built-in LED display helps you identify the current shooting mode, resolution, field of view, storage capacity and recording time of the camera. Gone are the Lightning plugs (WiFi transfer is faster, anyway), but it gained a 1/4 inch mount point to go with your selfie stick or tripod, providing an additional use case. Unsurprisingly, the old micro-USB port is now replaced by a USB-C socket.

Of course, the charging case still provides extra runtime, going from the old 60 minutes to a total of 150 minutes (basic 1080p30 stabilization video) when the camera is in use when attached. For comparison, that’s a little more than the 130-minute run time we GoPro Hero 9’s 1080p mode. When depleted, the Go 2 itself takes around 35 minutes to be fully charged, while its charging case needs around 65 minutes (battery capacities are 210mAh and 1100mAh, respectively) .

The Go 2 still offers one-touch or double-touch shortcuts to instantly start shooting in different modes. By default, when turned off, a single tap toggles basic stabilized video recording, while a double tap captures a photo (2000 x 2000). A long press for a second turns on the camera, and from there, a single press triggers a stabilized FlowState video recording, and a double press starts a hyperlapse video recording. These take a bit of learning to get started, but if needed, you can customize the app’s shortcut assignments. Or just use the charging box bluetooth remote control function, otherwise the app.

Speaking of which, the Insta360 app offers a variety of “FlashCut 2.0” templates that use AI to stitch your clips together with the corresponding music, while still letting you choose the desired part of each clip. These tend to be only 13-15 seconds long, although I find that to be about the right amount of time for my attention span after a day trip. It would take more thought, not to mention the longer waiting time for exporting videos. That said, you have the option of expanding your stories based on these models. I’ve included two examples above to give you a taste of what the template library has to offer (make sure you choose 1440p resolution in the video player).

It goes without saying that the Insta360 Go 2 is a more compelling case for tiny action cameras than its predecessor. There are far fewer limitations this time around, not to mention the improved video quality and how some accessories make the camera even more versatile this time around. But if you need more persuasion, the Go 2 will be getting a nice Minions Edition – a very fitting match, given the camera design – sometime this summer. This will be available exclusively on the Insta360 website for $ 329.99 (US, Canada, Japan, Mainland China, Hong Kong, and Taiwan only).