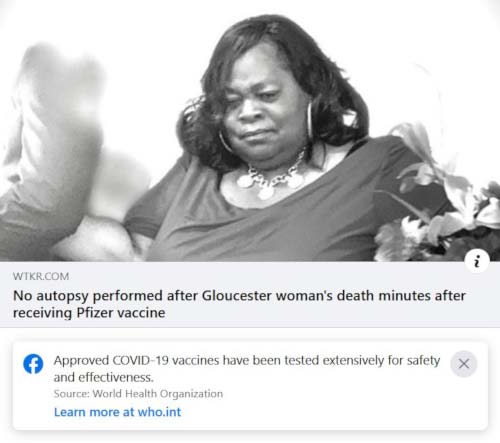 So, good news, folks! It looks like GloboCap’s genetic modification division has come up with a miracle vaccine for Covid! It’s an absolutely safe, non-experimental messenger RNA vaccine that teaches your cells to make a protein that triggers an immune response, just like your body’s immune system response, only better because it’s made by companies. !

OK, technically it hasn’t been approved for use – this process normally takes several years – so I’m guessing it’s slightly “experimental”, but the United States Food and Drug Administration and the European Medicines Agency have issued “emergency use permissions,” and it’s been “extensively tested for safety and effectiveness,” according to Facebook’s anonymous “fact-checkers,” so there’s absolutely nothing to worry about.

This experimental, non-experimental vaccine is truly a historic development, because in addition to saving the world from a virus that causes mild to moderate flu-like symptoms (or, more generally, no symptoms) in around 95% of those infected, and that more than 99% of those infected survive,1 the possibilities for future applications of messenger RNA technology, and for genetic modification in humans, in general, are virtually limitless at this stage.

Imagine all the diseases we can cure and all the genetic “mistakes” we can fix, now that we can reprogram people’s genes to do whatever we want – cancer, heart disease, dementia, blindness, not to mention the common cold! We could even cure psychiatric disorders, like “antisocial personality disorder”,2 “oppositional defiant disorder”,3 and other “conduct disorders”4 and “personality disorders”.5

Who knows? A hundred years from now, we will probably be able to genetically cleanse the human species from age-old scourges, such as racism, sexism, anti-Semitism, homophobia, transphobia, etc., by reprogramming the defective alleles of each, or by implanting a kind of nanotechnological neurosynaptic. shards in our brains.

The only thing that stands in our way is the utterly irrational resistance of people to let companies rethink the human organism, which was obviously rather poorly designed and therefore vulnerable to all these horrible emotional and behavioral illnesses and disorders. But I’m getting a little ahead of myself.

The important thing for now is to defeat this common influenza-like plague which has no significant effect on age-adjusted death rates,6 and whose mortality profile is more or less identical to the normal mortality profile,7 but who nevertheless left the world corporatocracy with no choice but to “lock in” the entire planet, to plunge millions of people into desperate poverty, to order everyone to wear medical-looking masks , to unleash armed squads of morons to plunder people’s homes, and otherwise turn society into a pathologized-totalitarian nightmare.

And, of course, the only way to do it (i.e. save humanity from an influenza virus) is to coercively vaccinate every human being on planet Earth!8

OK, you’re probably thinking that doesn’t make a whole lot of sense, this crusade to vaccinate the entire species against a relatively standard respiratory virus, but that’s just because you’re still thinking critically. You really have to stop thinking like this. As The New York Times just pointed out, critical thinking doesn’t help.9

In fact, it could be symptomatic of one of those “disorders” I just mentioned above.ten Critical thinking leads to ‘vaccine hesitancy’ which is why companies are working with governments to immediately censor any content that deviates from the official Covid-19 narrative.11 and deplatform the authors of such content,12 or discredit them as “anti-vax disinformers”.13

For example, Children’s Health Defense14 reported on so-called ‘adverse events’ and deaths related to Covid vaccines, despite authorities saying ‘there are no safety issues with vaccines’15 and “there is no link between Covid-19 vaccines and those who die after receiving them.”16

In fact, according to Reuters fact-checkers, these so-called “adverse event reports” “may contain incomplete, inaccurate, incidental or unverifiable information”!17

Yes, you read well between the lines. Corporate media can’t come and say it right away, but it looks like “anti-vax disinformers” fabricate “unwanted events” from whole tissue and hack them into the VAERS database18 and other such systems around the world.

Worse yet, they sort of infiltrate these made-up stories in the mainstream media in order to lure people into “vaccine hesitancy” and prevent us from vaccinating all the men, women and children in the physical universe,19 repeatedly, on an ongoing basis, for as long as “medical experts” deem necessary. Here are some examples of their work:

And then there are all the folks on Facebook who share their stories of loved ones who died shortly after receiving the Covid vaccine, which Facebook fact checkers are doing their best to discredit with their “child verification notices.” facts ”of official appearance. For example:

OK, I realize it’s uncomfortable having to deal with things like this (i.e., global companies like Facebook hinting that these people are lying or using sudden death of loved ones to discourage others from getting vaccinated), especially if you’re trying to follow orders and parrot official propaganda – even the most fanatical Covidian cultists33 probably still have an ounce of human empathy buried deep in their cold little hearts.

But there is an information war, guys!34 You are either with the corporatocracy or against it! Now is not the time to be disgusted or, you know, to publicly show an ounce of compassion. What would your friends and colleagues think of you ?!

No, report these anti-vaxxers to the authorities, shout them out on social media, turn off your critical thinking skills, and line up for the shot! The fate of the human species depends on it! And, if you’re lucky, GloboCap might even give you one of these nifty digital Covid vaccine tattoos for free!

CJ Hopkins is an award-winning Berlin-based playwright, novelist and political satirist. His plays are published by Bloomsbury Publishing and Broadway Play Publishing, Inc. His dystopian novel, Zone 23, is published by Snoggsworthy, Swaine & Cormorant. Volumes I and II of sound Consent plant testing are published by Consent Factory Publishing, a wholly-owned subsidiary of Amalgamated Content, Inc. It can be reached at cjhopkins.com or consentfactory.org.

Will Vaccinated People Be More Vulnerable to Variants?

Sulforaphane for your heart and brain