The Brumbies will have another new captain for their clash with the Force, as half-back Nic White takes the lead in the absence of Tom Cusack.

The No.9 Wallabies has already been captain of the Brumbies twice and became the club’s youngest skipper in 2013 when he led them at 22.

Jahrome Brown swings back in place of Cusack as Wallabies’ prop James Slipper has been flipped to the side of the head.

“James is a senior player who takes pride in his details and wanted to know as soon as possible if he would play for the header,” said Brumbies coach Dan McKellar.

“He’s more than comfortable in this position and happy to do what’s best for the team.

“We are really looking forward to seeing Slips back on Friday night because it has been very good for us at the start of the year.”

Props Fred Kaihea and Sefo Kautai and backrower Rory Scott are also set to make their Brumbies debut off the bench.

Kaihea and Scott are local produce, while Kautai, a former Chef and New Zealand Under-20 representative, impressed immediately after being a mid-season rookie in Canberra.

“Sefo has been good since coming in, has done well in scrums and has a good experience at this level,” said McKellar.

“He hasn’t played since November but he’s been in very good shape.” 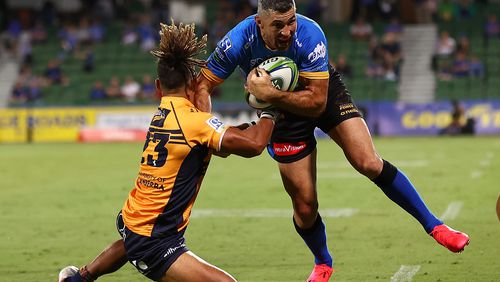 Meanwhile, the Force’s chances of registering an upheaval have been affected by injuries to veteran test backs Rob Kearney and Richard Kahui.

In their place are Jack McGregor and Marcel Brache at the back and left wing respectively, with coach Tim Sampson describing the changes as “an easy transition”.

Jono Lance is recalled on Matchday 23, while England Under-20 rookie Jordan Olowofela is set to make his first appearance for the Force.

“We have to play smart and not allow them to make easy entries into our defensive zone,” Sampson said.

“We have to frustrate the Brumbies and make them work hard.

“They like to get out of blocks quickly, so I expect a competition at a steady pace throughout.”