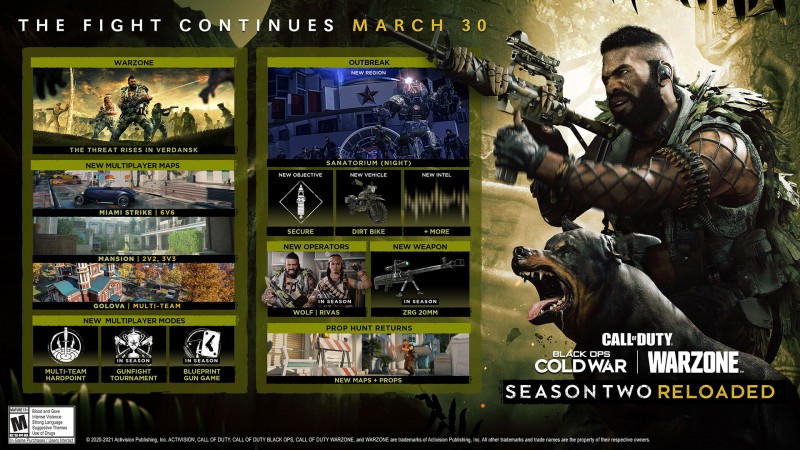 
Call of Duty: Black Ops Cold War and Warzone File Sizes were massively oversized since launch, a caveat that has been a huge pain in the CoD community. Fortunately, that is about to change as Activision reveals how it reduces the size of Warzone files and, as a result, much more manageable.

Season Two Reloaded brings a more optimized file size throughout Warzone and marks the start of smaller downloads from here on out. “Improvements to the overall content management system have been made possible through data optimization and streamlining the content packs needed for individual game modes, “Activision says in its latest blog post.” This will come after a larger than usual one-time update for Season Two Reloaded, which will include these optimizations and is necessary to reduce the overall footprint; Future patches for Modern Warfare and Warzone are expected to be smaller in size than the one that releases on March 30 at 11 p.m. in the Pacific. ”

With file sizes sometimes exceeding 100GB, it’s no wonder that so many people are fed up with it. As someone who regularly plays Team Deathmatch in the base game, besides Warzone, it has been difficult trying to make sure I have the right amount of space in conjunction with the other online titles that I have. ‘currently enjoying. This aspect of continuous updates has been a source of anger for the community as a whole, so these changes to make file sizes more reasonable are welcome by many.

When it comes to Call of Duty: Warzone Season Two Reloaded, players can expect a lot of new in-game content to be released. For more on what’s going on with the upcoming update, you can check out the full blog post. here.