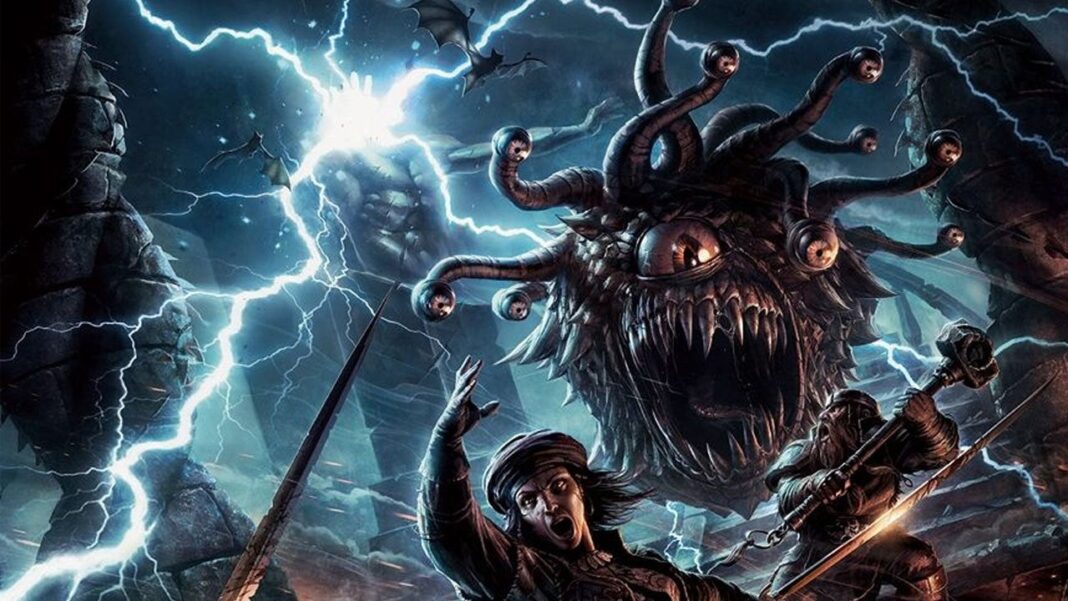 The latest trailer for Dungeons and Dragons: Dark Alliance, which you can see above, gives us a better look at how developer Tuque Games is adapting one of D&D’s most famous monsters: the Beholder. “The Beholder is one of the most iconic D&D creatures, so it was an incredible opportunity to bring him to life for Dark Alliance,” says Kevin Neibert, Lead Game Designer at Tuque Games. “We took our inspiration from the Monster Manual, and then we gave it our own creative touch. Enter Hagedorn, the Dreamer, and his distinctive chitinous shell. “
“I think Hagedorn is the most interesting boss in Dark Alliance.”

The look is definitely a different take on the design most players are familiar with (you can see a comparison between Dark Alliance’s Hagedorn and the latest tabletop design below), and is far from the original design from 1975 – but Hagedorn isn’t just a visually unique monster.

“In the [tabletop] D&D tradition, each eye rod has its own magical ability, “explains Neibert,” but due to technical limitations, giving each eye rod an independent animation and effect was well beyond the reach. As a result, we decided to select the most interesting effects from a gameplay standpoint and use the central eye as a conduit for all of Hagedorn’s abilities. “Beholder’s tabletop eye rays have a variety of powers – from crippling enemies to what is basically an insta-kill death beam – and from the trailer above, it looks like we’ll be seeing a wide variety of these powers implemented in Dark Alliance.We also get a good overview of the creature’s lair, and although we cannot see the real one of the wild lairs actions (like a massive cosmic eye opening on a wall random to fire lasers at players), the team aims to retain the feel of classic boss fights both tabletop and video games.

“The arena is made up of a central platform and an outer ring,” explains Neibert. “As the boss fight progresses, Hagedorn becomes more and more enraged and begins to lose control … causing pieces of the outer ring to disintegrate. This puts more pressure on the player, because it has less space to maneuver, and increases the overall intensity of combat. “I enjoyed what I played of Dark Alliance when I was able to get started a few weeks ago, and I’m curious to see how Tuque also puts its unique imprint on other classic D&D monsters. For Neibert, while he’s clearly passionate about all 30 Dark Alliance monsters, he can’t help but play favorites.

“I think Hagedorn is the most interesting boss in Dark Alliance, and I’m really proud of the talented team of character artists, programmers, animators, VFX artists and sound designers who have contributed to bring the Dreamer to life. “

To learn more about Dark Alliance, see the latest gameplay trailer where to get a candid look behind the scenes in the studio’s first development journal.

JR is editor-in-chief at IGN and is going to try 100% kitbash out of a mini of Tuque’s extra-spooky segmented viewer. If it works, he will probably post about it on Twitter.