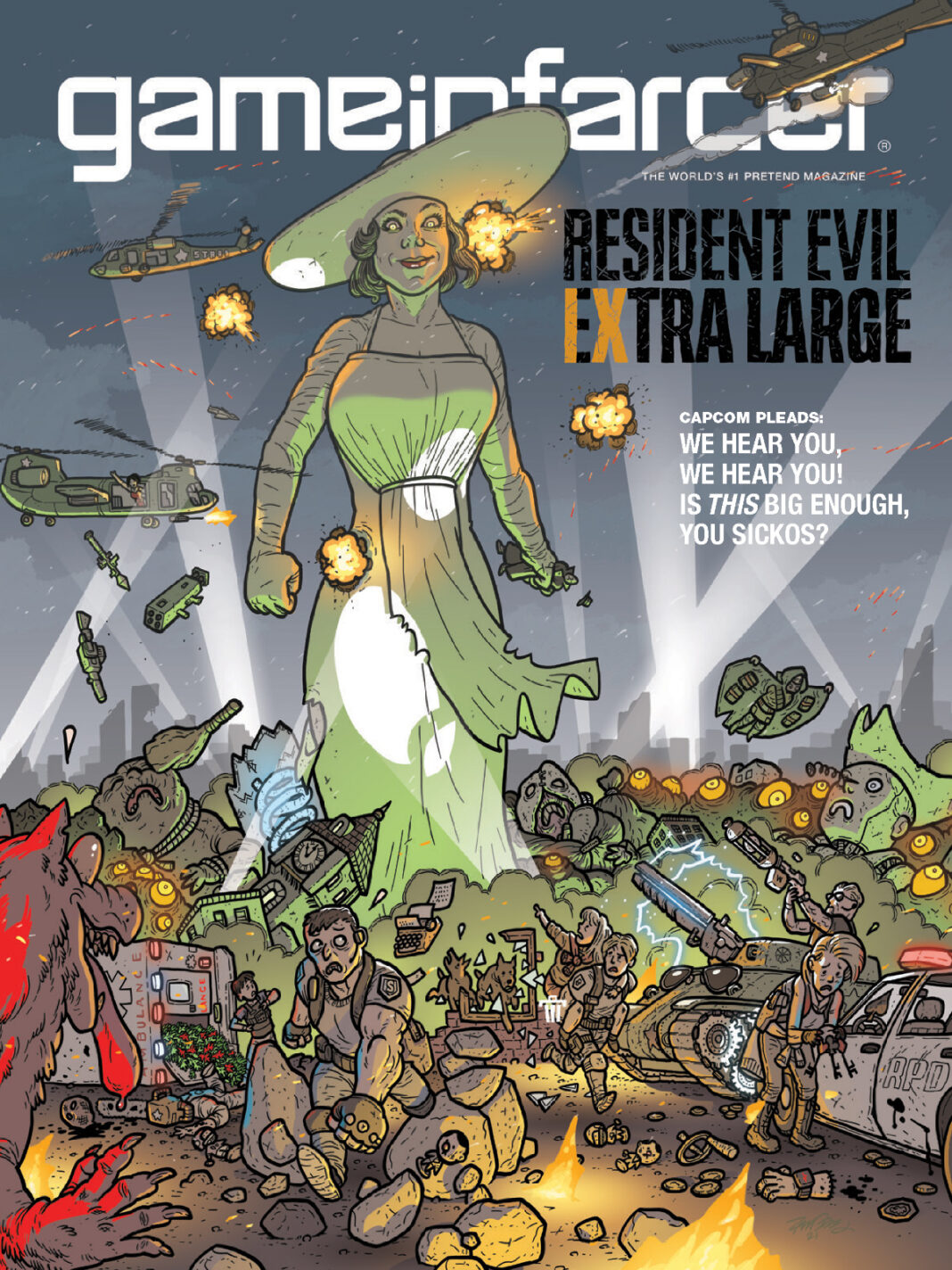 
JEFF: When we first got the idea for this one, I pushed hard enough for it, because I knew Zander would love to draw this. Because he’s basically a Kaiju, and Zander does it Kaijumax.

ZANDER: And it is very current. She’s really in people’s free space right now, at least judging from social media.

BEN: This is where we got the idea. Everyone had gone crazy for this vampire. So we circled the idea with things like, maybe other companies see it and make their characters huge. Like a giant pyramid head for a new silent hill. We kept coming up with stuff like that, but at one point we said, “Why are we going around this? We should just do Resident Evil, and it’s just ridiculously huge.

ZANDER: I think it’s a shame that so many gags are so small. But I like the ambulance that spills nothing but grass, and Jill Valentine tries to find the right key to the car.

JEFF: The dogs that come out of the ruins of the building and continue to smash the windows attract me. This is their thing! And the Tex-Avery wolf in the corner.

BEN: I pitched the idea that Wesker should have sunglasses everywhere, but you put a huge pair of them over his tank top, which is also fun.

ZANDER: The tank, the helicopters, the ambulance – I used the same trick as the Web revolver. I found some 3D models and put them as a reference. It saves a lot of time.

BEN: Maybe it was a holdover from the Silent Hill idea, but I wanted to have Pyramid Head next to a sign that said “Must be this big to get a new game.” But there was a lot about Resident Evil, so it didn’t quite fit.

JOE: I just don’t see the word “sick” without thinking about the cartoon Onion.

BEN: One of the other ideas we had before deciding on this one was Steampunk 1877. It could have been really cool visually, but we just didn’t have enough good gags for it. We also talked about a cover of The Last of Us, but there was so much talk about this series by the time Part 2 was released… it was hard to find an untapped joke there.

JEFF: I really like the “Extra Large” with the IX in there.

ZANDER: Yeah, I think it was Blake [Hester] who had this idea. But it was fun to put all kinds of details like that in here. The tracers coming out of their guns, and figuring out how to make all the search lights, with the layers off.

JEFF: Overall, looking at all of these covers over the years, one of the funniest things about the whole process is, after our concept meetings, that we send it to Zander. And the funniest part is when you send us your initial sketches, and we all gather around Joe’s office and look at them; they were still so good, and they made it all alive and real. Joe would do his best to sketch a rough composition – bless him, he tries. But getting that idea of ​​what that would look like has always been a really fun part of the process.

ZANDER: Thank you! It has always been a very rewarding part of the process for me, too, to send it out and get feedback.

JOE: And I always felt like a beaten record, because I always said how awesome it looked. It’s hard to express how impressive it is to see an image appear that far exceeded what we thought.

ZANDER: I looked forward to being there every year. It’s never “Oh no, I have to do this super fun illustration again!”

JOE: Well, Zander, I am so grateful that we have been able to collaborate for so long!

ZANDER: I really appreciate this! And it was fun going through it all!