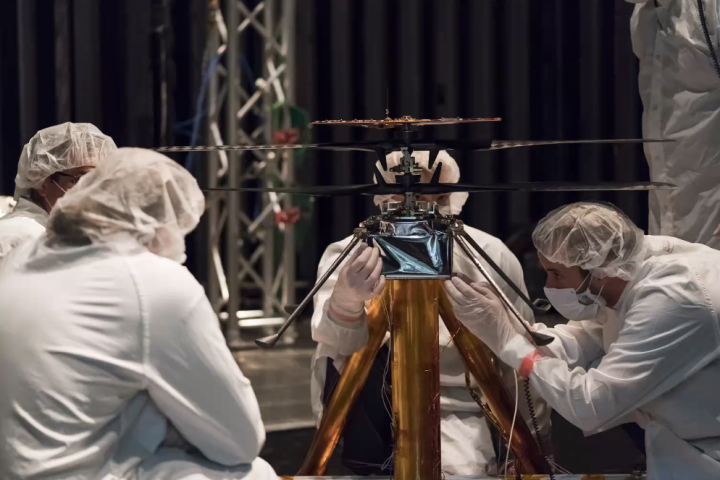 NASA has chosen to postpone the first experimental flight of the Ingenuity Mars helicopter until Wednesday, April 14 at the earliest. The agency took stock on Saturday to let it be known that the flight of its first and only Martian helicopter, which was due to take off on April 11. , had been postponed for another three days. The plane will now remain grounded on the surface of the Red Planet until at least April 14 after a problem was detected during one of its last pre-flight tests.

NEWS: We are now aiming for Wednesday April 14 at the earliest for our ingenuity #MarsHelicopterattempt of the first motorized and controlled flight on another planet. Details: https://t.co/LaoY7zyijY pic.twitter.com/TIwlZ3foD1

“During a high-speed rotation test of the rotors on Friday, the control sequence controlling the test ended prematurely due to the expiration of a watchdog timer,” NASA explained in a press release. “This happened while he was trying to switch the flight computer from Pre-Flight mode to Flight mode. The helicopter is unharmed and has communicated its full telemetry set to Earth.

“The watchdog timer monitors the sequence of commands and alerts the system to any potential problems. It helps the system stay safe by not proceeding if a problem is observed and is functioning as intended. The helicopter team examines telemetry to diagnose and understand the problem. Following that, they will reschedule the test at full speed. “

The first flight of NASA’s Mars helicopter Ingenuity has been postponed to April 11 to give the team and the plane more time to prepare.

Originally scheduled to fly on April 8, NASA delayed the flight of its first and only Martian helicopter to give Ingenuity’s team back to Earth more time to characterize the helicopter’s energy history. Overtime is also just a matter of caution, as the team is “extremely careful” every step of the way.

NASA is working on an ingenuity helicopter, Photo credit: NASA

The helicopter, which weighs around four pounds with a wingspan of 1.2 meters, is powered by charged batteries through solar panels on its top face and with a full battery the helicopter can fly for around 90 seconds, according to The NASA. It must then land safely and recharge enough of its battery to power the onboard heater, as this protects the helicopter from the cold nights of the Red Planet.

The extra three days give the Ingenuity team the time they need to better understand what this power cycle looks like and, more importantly, to ensure that their energy is positive every step of the way. The helicopter’s first flight will be on a full battery and it will only fly a few meters during this first flight before returning to the surface of Mars. It won’t go higher than about 15 feet, according to NASA.

“This next step (flying for the first time) is huge,” said Tim Canham, helicopter operations manager on Mars, in a question-and-answer session on Ingenuity today. “Can it climb, hover and land safely? It will be a moment of major triumph for the helicopter team.”

Sights and Sounds of Mars from NASA’s Rover Perseverance

It is currently scheduled for April 11, although an official time has not been announced. The flight will not be broadcast live, however. People back on Earth won’t see anything of the flight until the flight’s telemetry is retrieved, which will take a few sols – or Martian days – that are about 40 minutes longer than the days on Earth. NASA said the Perseverance rover, which is the rover that recently landed on Mars and carried ingenuity to the planet with it, will follow the flight at about 65 meters. It will take photos that will eventually arrive on Earth, but it could also take a while.

Why NASA’s Ingenuity flight is such a big deal

What makes this first flight an important step for NASA, beyond the first flight of a helicopter on Mars, is that it is fully powered by pre-programmed sequences. There are no joysticks involved and the helicopter is not remote controlled.

“The (flight) sequences were pre-built by the ground crew,” said Elio Morillo, operations engineer for Perseverance, during the NASA question-and-answer session. “These footage have been tested over the years, (but) they’re pre-canned. We don’t have real-time control of the helicopter. It’s completely self-contained.”This posed many challenges for the Ingenuity team. What if there is a Martian wind gust that occurs during a flight? The helicopter is equipped with sensors capable of detecting these gusts of wind and correcting its trajectory accordingly. For the most part, however, the preset flight sequences have been repeatedly tested in chambers that simulate what Ingenuity is experiencing on Mars.

The Perseverance will witness Ingenuity’s first flight approximately 65 meters from the helicopter on the Van Zyl Overlook. It will require footage and the team is currently determining whether the rover will be able to record sound. It has a directional mic on board, but the team is not sure if, due to the distance, they will be able to pick up the sound of the helicopter.

Perseverance Integration Officer Farah Alibay said it was important to remember that the atmosphere on Mars, which is 1% of the density of Earth’s atmosphere, is quite different from our planet and that, therefore, the sound travels there differently.

As for the big picture of Ingenuity, its mission is to serve as a technology demonstration.

“Ingenuity is a test vehicle for Mars,” Canham said. “It will take very detailed logs … 500 times per second … (for us) to see what happened and characterize the flight to Mars. A suitable analogy is the Mars Pathfinder and Sojourner – to try something that’s never been done before and learn a ton of it… for future engineers and scientists to build bigger and better helicopters for Mars. “

Wesley LeBlanc is a freelance writer, guide and science guru for IGN. You can follow it on Twitter @LeBlancWes.