A national order at home? Where the audience stands

As hospitalizations and deaths continue to rise, some public health officials are calling for a nationwide lockdown to help control the pandemic. This includes Michael Osterholm, a member of President-elect Joe Biden’s COVID-19 advisory committee, who is calling for a national stop of six to eight weeks.

The short-term consequences would be staggering: just look at March and April, when the unemployment rate fell from 4.4% to 14.7%. Is this something that Americans could put up with again? Discover, Fortune and SurveyMonkey surveyed 2,247 American adults between November 30 and December 1.

We found that among American adults, 58% support a national “stay at home” order, in which everyone in the country is required to stay at home except for essential services. Meanwhile, 40% of the public opposes such an order.

This support is striking given the economic damage caused by the state-imposed closures in the spring. It also shows how concerned Americans remain about the pandemic. However, this level of support is down 65% in a Fortune-SurveyMonkey survey in September.

It is perhaps not surprising that we have found a massive political divide. The majority of Democrats (87%) and Independents (67%) support a national stay-at-home order. Meanwhile, only 24% of Republicans would support such action.

There’s no clear reason for this gap, but some could come back to higher incomes remembering how quickly stocks collapsed in March at the onset of spring lockdowns. And the lowest-paid workers might be more careful since their jobs often involve face-to-face contact with the general public. 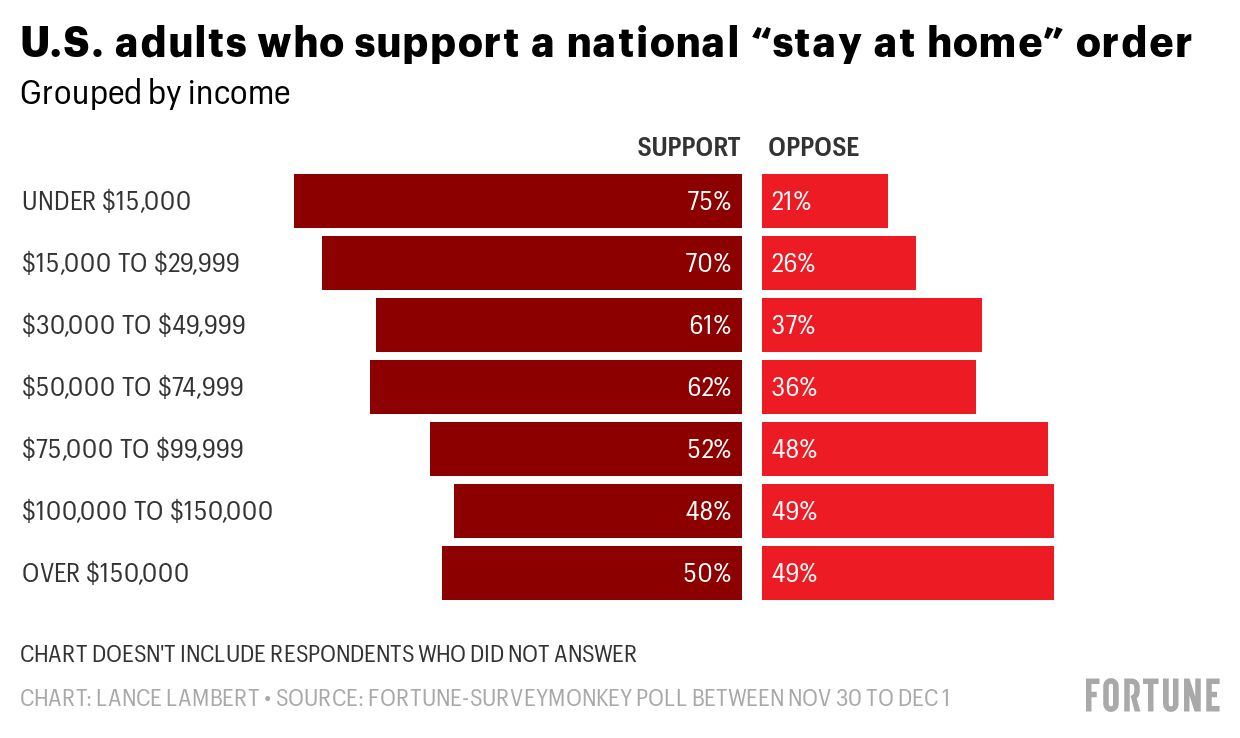 * Methodology: The Fortune-SurveyMonkey survey was conducted among a national sample of 2,247 adults in the United States between November 30 and December 1. The estimate of the modeled error for this survey is plus or minus 3 percentage points. The results were weighted according to age, race, gender, education and geography.

This is an excerpt from Fortune Analytics, an exclusive newsletter that Fortune Premium subscribers receive as a benefit of their subscription. The newsletter shares in-depth research on the most talked about topics in business today. Our results come from special surveys that we conduct and proprietary data that we collect and analyze. Sign up to receive the full briefing in your inbox.