Egyptian farmers on the front line in tackling water scarcity

Ali Mahmoud proudly pointed out the lines of black pipes laid on the dark earth of his field in the Belbeis region of the Nile Delta in Egypt. He was about to plant it with strawberries and is confident of a good harvest in March.

The pipes are part of a drip irrigation system he installed two years ago on his 1.25 acre plot that provides the right amount of water and nutrients to the roots of each plant.

“Now it’s easier to water the field,” he says. “I need to hire fewer workers and I use less fertilizer. In addition, I get a larger harvest because fewer plants are destroyed by overwatering.

Mr Mahmoud is one of a growing number of smallholders who are abandoning the costly but centuries-old flood irrigation method in which the entire surface of a field is watered.

As Egypt faces a future of water scarcity and the crucial agricultural sector accounts for 25% of the country’s gross domestic product, the government is desperately looking for ways to reduce water consumption and wants more farmers are following his example.

The problem is one of the biggest challenges Egypt faces. The country faces rapid population growth of nearly 2% per year, climate change is expected to produce sharp fluctuations in rainfall over the Nile’s sources and a new mega-dam built upstream in Ethiopia has intensified regional tensions over the Nile. water rights.

About 90 percent of Egypt’s freshwater comes from the Nile and millions of farmers depend on it to irrigate their land. Even before its neighbor’s Ethiopian Renaissance Great Dam was designed, the country was already suffering from water poverty, defined by the UN as an annual per capita share of less than 1,000 cubic meters of water. Egypt has less than 600 cubic meters per person.

Cairo and Addis Ababa both described the dam as an existential problem. Tense negotiations with Ethiopia have so far failed to reach agreement on how much water to discharge downstream during drought years. Addis Ababa, which started filling the dam reservoir in July, also refused to recognize what Egypt considers to be its legitimate water share based on its historical use – 55.5 billion cubic meters per year.

Egyptian President Abdel Fattah el-Sisi appealed to the UN and the United States for help – with the United States in response suspension of aid to Ethiopia this year. Regarding the mount, Egypt is considering a series of water-saving measures. “We reuse the water once, twice and three times after treating it,” said Mohamed al-Sabaie, an irrigation expert who is also a member of the upper house of parliament.

The government is also accelerating a project to cover thousands of kilometers of concrete canals to reduce infiltration and evaporation, and has limited the cultivation of water-intensive crops like rice.

But to have a significant impact, it must persuade millions of farmers to switch to more efficient methods. “Only countries with heavy rains can afford the luxury of flood irrigation,” Sabaie said. “This is not available to us, so we have to change the dominant culture. Modern irrigation saves 30-40% of water consumption. ”

To encourage poorer producers to embrace change, the government and state banks provide low-interest loans to purchase equipment. Mr. Mahmoud’s system costs $ 1,500 an acre, but officials say there are cheaper options. The government also provides advice and logistical support during purchase and installation.

A first phase covering just over 1.2 million acres is underway. Most are on reclaimed desert land where farmers face fines if they do not install modern systems. But smallholders who exploit the “old lands” of the Nile delta and valley where water is less scarce, such as in Belbeis, are also encouraged to convert. However, land holdings are generally small and the majority of farmers are poor.

Alaa Azouz, Outreach Officer at the Ministry of Agriculture, acknowledged that fragmentation of land holdings was a challenge, but that collective farming systems, in which smallholders come together, offered a way to share costs. .

“The other challenge is to convince farmers of the new system,” he said. “We know they need to see successful implementation models and the increased revenue they generate.” 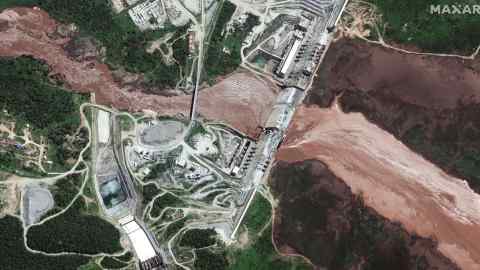 Ahmed Saber, one of Mr. Ibrahim’s neighbors in Belbeis, who grows guava trees and vegetables on less than an acre of land, is skeptical of the benefits of drip irrigation. “It’s too expensive and not suitable for small farms,” he says.

Officials hope those who are not convinced will be encouraged by seeing the system in action.

Taha Abou Lasheen, who installed drip irrigation in 2019, did so after seeing it used elsewhere in the delta. The attraction wasn’t just the water and cost savings.

“There is a difference in the size of the fruit and in the yield,” he says. “Instead of 20 tonnes per acre before, I now have 30.”