Michel Barnier said on Monday that peach now perhaps the most difficult obstacle to a trade deal between the UK and the EU, suggesting that the two sides were preparing to reach agreement on the most intractable element of the negotiations: the two sides. saying “a level playing field”.

The issue has been the subject of fierce negotiations, spawning its own lexicon of ‘ratchet clauses’, ‘evolutionary mechanisms’ and ‘punishment’ to describe the EU’s attempts to prevent Britain from falling. undermine its regulatory model in the future and gain an unfair competitive advantage.

Both sides say the other has given ground in recent days, fueling optimism over a deal. Mr Barnier, the EU’s chief negotiator, even coined a new non-threatening name for the compromise that is taking shape: “the rebalancing mechanism”.

Boris Johnson, the British Prime Minister, recognized the need for a set of principles for fair competition between the UK and the EU as early as October 2019, in a joint political statement confirming that Britain was in a situation different from Canada’s when it arrived. to enter into a trade deal with the block.

“Given the [European] Union and the geographical proximity and economic interdependence of the United Kingdom, the future relationship must ensure open and fair competition, encompassing strong commitments to ensure a level playing field, ”the statement said.

The two sides could agree in principle on “non-regression” – the idea that Britain and the EU would not backtrack from the standards they will have in common on January 1, at the end of the post-Brexit transition period.

But the EU has sought during future relations negotiations to go further and prevent the UK from stealing an unfair competitive advantage from the 27 member states by having less stringent regulations going forward.

Mr Barnier, on instructions from EU member states, sought a system to ensure that if Brussels tightened up its regulations in areas such as environmental protection, pressure would be put on the UK to do the same.

Both sides made concessions, but one of the most important came from the EU in July when Mr Barnier accepted Mr Johnson’s ‘red lines’ and said there was no need to create a level playing field around EU law and the European Court of Justice. help Mr Johnson deliver on his promise that Brexit would free the UK from bloc surveillance.

The European side was disappointed that Mr Johnson did not immediately return the favor with his own concessions, but a UK official said this week: [Mr] Barnier would allow the Prime Minister to achieve a resounding victory – they have come a long way.

However, over the next few months there was strong disagreement over the real meaning of equal opportunities.

Over the summer, Brussels lobbied for an “evolution clause” – called a “ratchet clause” by the UK.

This would have put in place a system where, when one side planned to toughen their regulations, there would have been a discussion with the other about the need to move forward together. The idea was to raise the common floor for standards to a new level below which they could not then be lowered, with fallback measures in the absence of agreement.

Mr Johnson opposed the idea, fearing that a future Labor government could work with the EU to introduce ‘anti-business’ regulations, which would make it impossible for a future Tory government to reduce them without incurring sanctions. .

Faced with this opposition, the EU has shifted in recent weeks to a new approach. He proposed a “mechanism” that would be reactive rather than proactive – allowing each party to sound the alarm if they felt that the regulations had diverged to the point of disadvantaging their businesses.

As part of this plan, as a last resort, the disadvantaged party could impose tariffs on imports to defend its companies and restore a level playing field.

In the first week of December, the number threatened to blow up discussions, as Mr Barnier presented what Mr Johnson called “new” demands – spurred, according to Downing Street officials, by French President Emmanuel Macron. The British side claimed the issue had derailed talks which were making promising progress.

The EU insisted there were no new demands, but Mr Johnson complained that Brussels wanted the ‘automatic’ right to impose sanctions on Britain if it failed. departed from Brussels regulations.

Britain also claimed the EU’s plan would allow sanctions to be imposed even if there was little evidence of serious damage caused by a discrepancy. “They were setting the bar very low,” said a British official. 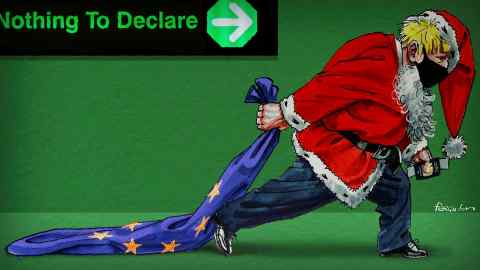 Discovery came this weekend. Mr Barnier told EU ambassadors on Monday that Britain had accepted the principle of having a mechanism if enough safeguards were built in to prevent abuse – removing the threat of ‘lightning tariffs’ imposed by the EU.

EU officials said discussions were now focused on testing whether a level playing field was at risk, on the processes for using the mechanism – including the role of independent arbitration – and on the remedies that the disadvantaged party could take.

Progress means the two sides are no longer arguing
political questions of British sovereignty against the integrity of the
EU single market: they are now debating how to manage regulation
divergence in the future.

Dominic Raab, the UK’s Foreign Secretary, said earnestly on Sunday that there was “always creative outlines” in the drafting of any deal to crush the cracks.

Mr Johnson’s allies are already calling the proposed new mechanism a ‘freedom clause’ – a headline intended to reassure Tory Eurosceptic MPs that Britain would retain the right to set its own regulatory direction, but with a system ordered to “rebalance” tariffs in the event of discrepancy. Very good.

For the 27 EU member states, the new mechanism would be hailed as a safeguard against the danger that a deregulated conservative government with red blood could unfairly undermine the EU’s single market in the future. A potential deal that allows for two competing definitions of “victory” appears to be emerging.