Now, almost 18 years later, they will line up as teammates when Marshall makes his debut for the Rabbitohs in tonight’s season opener against Melbourne at AAMI Park.

This is Marshall’s fifth NRL club, and at the age of 36, probably his last. But more than a decade and a half after the 2005 grand final flick pass that made him a household name, the former New Zealand captain remains one of the best offensive players in the game.

With Cameron Smith confirming his retirement, Marshall is now the oldest player in the NRL. However, as the immortal Andrew Johns pointed out on Wide World of Sports’ Freddy and the eighth, that will not prevent it from having an impact.

“He had a few touches in games last year that were just vintage,” Johns said.

“His ball game has never been a problem, but when he has his mind there is no better offensive player.

“He’s inspired a generation of young players, especially young Kiwi players, and it’s great to still have him there.

“He will be sensational there at Souths, coaching young players.”

It’s a sentiment shared by New South Wales coach Brad Fittler, who said Marshall’s career compared favorably to some of the greats. 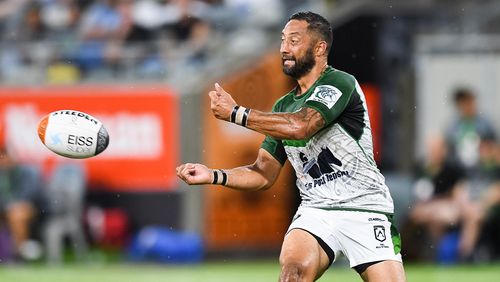 “It connected a whole generation of young children, wanting something a little more exciting,” he said.

“He’s the one they all looked at. Speaking of his legacy, his legacy is almost as good as anyone in the game.

“The fact that he brought something so different to the game.”

The 324-game veteran is on a one-year contract at Souths, and Fittler believes head coach Wayne Bennett will be able to get the most out of Marshall.

“I think it will be fantastic for them,” he said.

“I think it’s going to be crucial when you take him out, unless one of the halves gets injured, I don’t know how many crosses he could play, Cam Murray is playing normally in there and making a very good work.

“I think defending him in the middle will be easier than defending him at the limit, you have fewer decisions and a lot of people to help you.

“It will be great for them.”