New Xbox update speeds up downloads while games are suspended 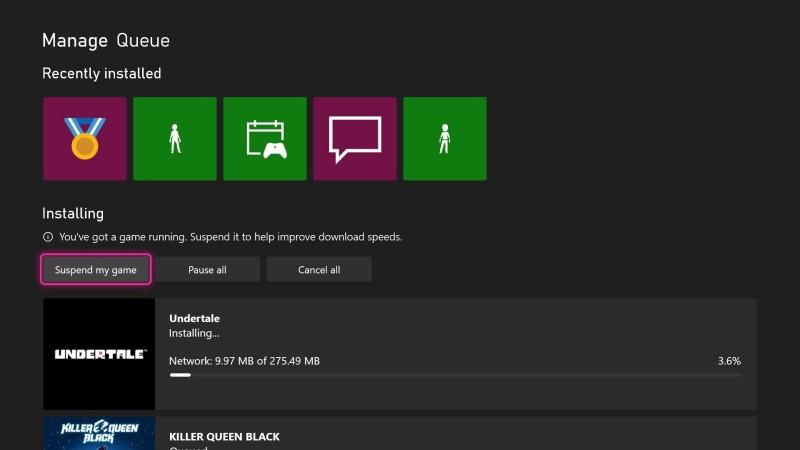 Xbox owners who want to speed up their game downloads while playing other titles now have their prayers answered through a new Xbox Dashboard update. Microsoft has announced a new ‘suspend my game’ feature that will help speed up downloads for Xbox Series X / S and Xbox One.

For now, the feature is only visible to members of the Xbox Insider program, Microsoft’s platform for testing new updates before they are released to the general public. The update allows users to speed up active downloads while pausing background games. The best part is that you will be able to resume playing that suspended title exactly where you left off after the download is complete. For Xbox Series X or S owners, turning back the clock is even faster with Quick Resume.

Hi Xbox Insiders! Have you noticed these changes during deployment? Suspending in Queue will allow you to download at full speed while ensuring that your game remains to resume (or resume quickly on Series X | S). New banners in the full library will lead you to more useful categories! pic.twitter.com/L49winRpM0

Eurogamer points out that the reason this wasn’t the case before is that Xbox reserves some of your Internet bandwidth for online uses (like multiplayer games) while the games are running. Once you exit or pause a track, that connection is unlocked.

The update should now be available for Xbox Insider Alpha and Beta tier members to test. There is currently no word on when it will launch for all users. The update also adds a nifty banner that clearly displays incoming and outgoing Xbox Game Pass titles.

This latest technical benefit comes after a series of performance-enhancing upgrades for the Xbox Series X. With Microsoft’s recent acquisition of Zenimax, some Bethesda games have been released. boosted with improved rates. There are also new gameplay perks for backward compatible titles.

Are you looking forward to the new update? If you’re a member of the Xbox Insider program, have you had a chance to try it? If so, what do you think? Hit us with these thoughts in the comments!