A prominent Saudi women’s rights activist has been sentenced to nearly six years in prison by a counterterrorism court in a high-profile case that has drawn widespread international criticism and intensified scrutiny of the kingdom’s human rights record.

Loujain al-Hathloul, who campaigned for women’s right to drive, was accused of inciting to change the political system of absolute monarchy, in service of a foreign agenda and to cooperate with accused individuals and entities. for violating the kingdom’s anti-terrorism law, according to Saudi state-affiliated media.

Ms Hathloul was sentenced to five years and eight months, from the date of her arrest in May 2018, with two years and 10 months suspended, meaning she could be released in a few months, said Lina al -Hathloul, his sister. She will be banned from traveling for five years, her sister said on Twitter.

Sentencing comes as President-elect of the United States Joe biden He is expected to take a closer look at the autocratic rule of Crown Prince Mohammed bin Salman, under which hundreds of royals, businessmen, activists, bloggers and d academics were jailed.

In October, Biden said his administration would “reassess” the United States’ relationship with Saudi Arabia as it used the second anniversary of the murder of veteran journalist Jamal Khashoggi to pledge that the rights of the ‘man would be a priority “even with our closest security partners”.

Prince Mohammed, the kingdom’s de facto ruler, has spearheaded sweeping change in recent years by pledging to modernize the ultra-conservative kingdom and reform the oil-dependent economy.

But the easing of social restrictions under his leadership, including allowing women to lead and live independently and to marry without the approval of male guardians, has been accompanied by waves of crackdown on all traces of dissent.

The assassination of Khashoggi by Saudi agents at the kingdom’s consulate in Istanbul in October 2018 sparked Riyadh’s worst diplomatic crisis in decades. But President Donald Trump stood by Prince Mohammed and has been accused by activists of turning a blind eye to human rights abuses in Saudi Arabia and elsewhere in the Arab world.

The paradox of Prince Mohammed’s reign was highlighted by the arrest of Ms Hathloul, 31, and more than 10 other activists who had also campaigned for the lifting of a driving ban for decades. They were detained just weeks before the ban was lifted, which was widely interpreted as a signal from the authorities that all forms of activism would be quashed. 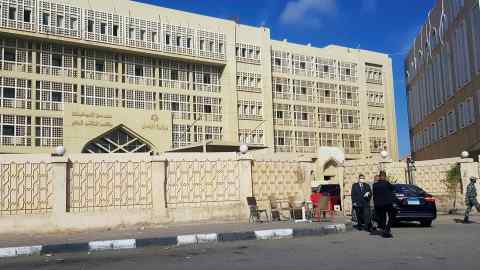 Ms Hathloul’s family alleged that she was tortured while in detention, but a court last week cleared authorities, saying there was no evidence to support her claims.

His case was transferred to a court that typically hears terrorism cases last month.

Alqst, a London-based human rights organization, said it was a “travesty of justice” that Ms Hathloul was “convicted under the anti-terrorism law, on charges related solely to her activism. peaceful”. She added that her trial “was flawed from start to finish.”

Human rights groups say many activists are still in prison. This month, a court sentenced Walid Fitaihi, a Saudi-American doctor, to six years in prison on what Human Rights Watch described as “vague charges primarily related to his peaceful political views and expression.”