Scientists alarmed by the spread of the Covid mutant

The highly infectious variant of the coronavirus that has emerged in the south-east of England is spreading rapidly to the rest of the UK and is already present elsewhere in the world, scientists warned on Sunday.

The World Health Organization has said its evolutionary working group is working closely with UK medical authorities to understand how the variant, now referred to as B.1.1.7, is likely to affect the course of pandemic. It has been detected in the Netherlands, Denmark and Australia.

Scientists say two aspects of B.1.1.7 are of concern. One is the unprecedented number of mutations it carries. The other is how quickly it is supplanting other strains of the Sars-Cov-2 virus in the south-east of England.

Jeffrey Barrett, director of the Covid Genomics Initiative at the Wellcome Sanger Institute, said 23 letters of the viral genetic code had changed, 17 of which could affect the behavior of the virus – especially helping it to enter and spread in cells human.

“This new variant is very concerning and unlike anything we’ve seen so far in the pandemic,” he said.

The United Kingdom and Denmark are the [world’s] most regular and prolific sequencers. The variant could therefore be elsewhere and not yet detected.

There is no evidence to date that the mutations affect the course of the disease in people infected with B.1.1.7 or the effectiveness of Covid-19 vaccines under development.

“Hospitalization rates have increased recently [in south-east England] but roughly in line with the increase in the number of cases, which does not indicate that the new strain is causing more severe symptoms, ”said Francois Balloux, director of the UCL Genetics Institute in London.

“I would be very surprised if there was any evidence that this creates more serious symptoms,” added Prof Balloux. “It is also not a strain that should be able to escape the protection provided by vaccination caused by current vaccines or previous infection.”

But Kristian Andersen, director of infectious disease genomics at the Scripps Research Institute in California, said, “I have seen many articles stating ‘no effect on immunity, vaccines or clinical features. It’s not correct . . . The point is, we don’t know but we will in the coming weeks.

Scientists at the UK government’s Porton Down Microbiology Laboratories and elsewhere are working hard to understand if and if so how mutations affect disease severity and the body’s immune response as well as viral transmissibility.

The increased infectivity of the variant is illustrated by the fact that after it emerged in Kent on September 20, it was responsible for 28% of infections in London in early November and 62% in the week ending December 9 .

Computer modeling suggests that it is 70% more transmissible than other strains of Sars-Cov-2 circulating in the UK and increases the R-value – the average number of people to whom a person with Covid-19 transmits the infection – 0.4, which makes the outbreak much more difficult to control without strict lockdown measures.

According to a article published on Saturday by the Covid-19 Genomics Consortium UK, the laboratories have sequenced 1,623 Sars-Cov-2 viral genomes showing the B.1.1.7 variant. These include 519 in London, 555 in Kent, 545 elsewhere in the UK, including Scotland and Wales, and four in other countries.

Regular Covid-19 tests do not detect viral mutations. Variants can only be identified by reading the 30,000 letters of genetic code in each sample of Sars-Cov-2 using specialized sequencing machines.

“The United Kingdom and Denmark are the [world’s] the most regular and prolific sequencers ”, emphasizes Emma Hodcroft, viral geneticist at the University of Bern in Switzerland. “The variant could therefore be elsewhere and not yet be detected. More coordinated sequencing efforts at regional and global levels would help us monitor variants. “ 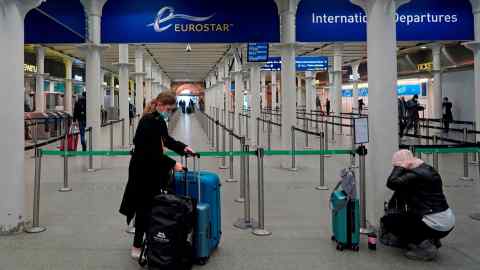 All viruses mutate and B.1.1.7 is not the first variant of concern. Examples include the D614G mutation that appeared early in the pandemic and moderately increases the transmissibility of Covid-19. This strain has spread from Spain to the rest of Europe over the summer. The Y453F mutation appeared in Danish mink but did not spread widely in other countries.

The strain of most international concern, besides B.1.1.7, is a different variant in South Africa called 501.V2. Professor Salim Abdool Karim, head of the country’s Covid-19 program, said on Friday: “We weren’t expecting how quickly this variant has become dominant in South Africa. . . We find that between 80 and 90% of the virus is this 501.V2 mutant. “

Prof Karim said that 501. V2 increases “viral load” – the amount of virus present in patients – “which can translate into greater transmission efficiency.” Preliminary results in the UK suggest that B.1.1.7 has a similar effect.