South Africa is emerging from its longest recession in 28 years, but may not return to pre-COVID-19 levels until 2025, according to the economist.

The South African economy may only return to pre-Covid 19 levels by 2025 and remains vulnerable to a local resurgence of the pandemic, even after emerging from its longest recession in 28 years.

Gross domestic product rose 66.1% at an annualized rate in the three months to September compared to the previous quarter, after falling 51.7% in the second quarter, Statistics South Africa said in the capital on Tuesday. , Pretoria. It was more than expected and the first positive figure after four periods of contraction.

However, compared to the same period last year, GDP fell 6%, the second consecutive quarter of decline. On a non-annualized basis, the economy grew 13.5% from the previous quarter.

The rebound in the quarterly figure was expected with the resumption of production in Africa’s most industrialized economy after the cessation of most activities due to a strict national lockdown. The recovery remains under threat, with power shortages and slow structural reforms likely to weigh on sentiment.

“The recovery is already losing momentum while a resurgence of Covid-19 may require stricter containment measures. We only expect a modest recovery until vaccines become widely available. “

The median estimate of 14 economists in a Bloomberg survey was for a 54.4% increase in output. The rand gained 0.8% to 15.0331 against the dollar, the highest level since February.

Getting back to pre-Covid level could take at least five years and “that’s only on condition that we stick to the reforms,” ​​independent economist Thabi Leoka said by phone. Unlike the 2008-09 crisis, when South Africa’s economy was supported by strong global growth, the country cannot rely on a linear international rebound to raise its GDP, she said. 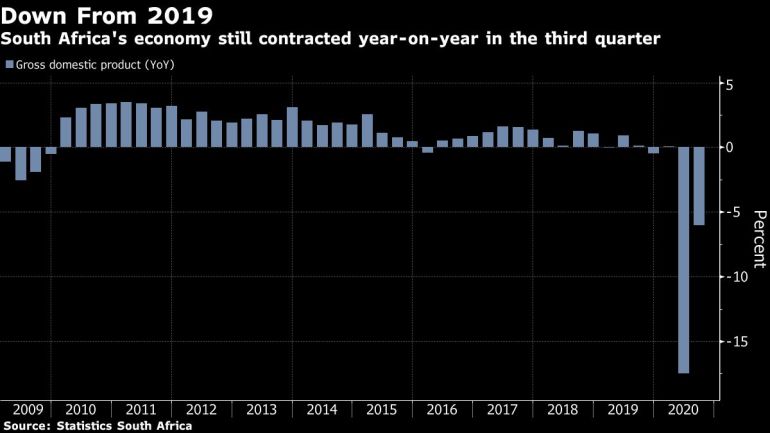 For the nine months up to September, GDP contracted by 7.9% compared to last year. This is the clearest indication of the extent of the contraction of the economy during the whole year and is in line with the forecasts of the government and the central bank.

A resurgence of the pandemic in South Africa is among the main downside risks to growth next year, according to Hugo Pienaar, chief economist at the Stellenbosch-based Bureau of Economic Research. The end of the Covid-19 temporary support measures also means the economy will be much less robust in the fourth quarter and at the start of the first three months of 2021, he said.

Household spending, which accounts for around 60% of GDP, increased 69.5% on an annualized basis from the second quarter. Investment, reflected in gross fixed capital formation, increased by 26.5%.

The increase in coronavirus cases around the world has hit some of South Africa’s major trading partners and sources of tourism revenue, while an increase in home infections could lead to the reimposition of some restrictions. This would make it more difficult to reduce the official unemployment rate, which returned to a 17-year high in the third quarter, improve revenue collection and curb a large budget deficit and growing public debt.

(Updates with the economists’ commentary in the sixth paragraph)
–With the help of Simbarashe Gumbo.