Former Australian captain Ian Chappell has said Will Pucovski must make his debut if he is deemed healthy by medics in the third test to avoid too many “false starts”.

Pucovski has been on the verge of making an international debut for the past 12 months, but has yet to don the Baggy Green so far.

He was in line to make his Test debut last summer before stepping away from the game due to mental health issues, before a concussion derailed his summer this time around.

With the 22-year-old seemingly due to his latest concussion, the ninth of his fledgling career, Chappell wants to see him unleashed on the international stage.

“They have to play him, he’s had too many false starts,” he told Wide World of Sports.

“It will be tough because India is obviously going to bounce him back and he hasn’t had a chance to test himself in a short bowling match, which you really have to do pretty quickly after getting hit.

“If he keeps coming to the start line and pulling out, if that keeps happening, it has to have a pretty big effect on him mentally as well.

“If the doctors said it was safe for him to play, then I think I would play him.”

Although he has not had any match training since being hit in the head while playing for Australia A against India on December 6, Pucovski has been sidelined by the Aussie pacemen in a grueling net session Wednesday.

It was a severe test, which Vice Captain Pat Cummins said the young pistol had passed with flying colors. 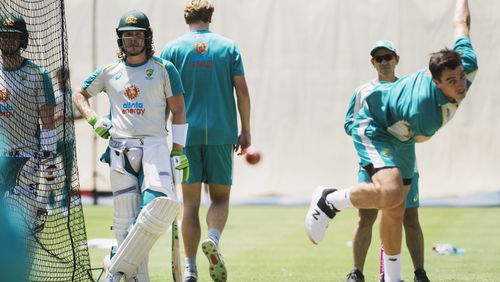 “As bowlers, we prepare our bodies and the hitters come face to face trying to sharpen up before the game.

“He made us all feel like really slow bowlers.

“Everyone is very impressed with his drumming temper at such a young age.

“What’s great is that he’s scored so many points in Shield cricket it’s great that a young man can come in and know his game so well.

“Like all those who start in their first game, they may not play right away.

“It might take a while for him, but he’s done whatever it takes to make it happen and I can’t wait to see what he can do.”