Californians Ordered To Stay Home As Covid Rises In US

Most Californians had been ordered to stay at home from Sunday evening, as U.S. officials grappled with an outbreak of coronavirus cases during the holiday season, which put further pressure on the healthcare system from the country.

The new restrictions followed orders announced by California Governor Gavin Newsom that would restrict travel and commerce if intensive care unit capacity fell below 15% in five regions of the state. On Saturday, the central San Joaquin Valley region and the broadly defined region of southern California, which includes Los Angeles, had violated the limit.

San Francisco and some other Bay Area counties have said they will voluntarily comply with the order starting Sunday night.

California’s measures follow a string of record daily highs of the coronavirus last week, with the United States registering 224,831 new cases on Friday and 211,073 on Saturday. More than 101,000 people were in hospital on Friday and Saturday, marking another record, according to the Covid Tracking Project.

Coronavirus cases have soared across the United States during the holiday season, prompting Americans to stay at home until vaccines are available.

Within 24 hours of FDA green lighting with authorization, we will ship to all states and territories we work with. And in a few hours they can vaccinate

Additional cases of the coronavirus were placing hospitals – which typically fill up to 90% of their capacity during the winter on routine cases – “at breaking point,” Ms. Birx added.

President Donald Trump, who staged his first live campaign rally since losing the election over the weekend, has touted the impending deployment of the Covid-19 vaccines. But neither he nor many of his supporters wore masks during the busy event in Georgia, which has seen a record number of new cases of the virus in recent days.

California saw an increase in coronavirus cases statewide to more than 1.3 million on Saturday, marking a 1.9% increase from the previous day.

Grant Colfax, San Francisco’s director of health, said the city was experiencing its “worst outbreak yet” of the virus. “This is straining the state of California’s healthcare systems and taxes our healthcare workers,” he said.

Mr Newsom’s measures force affected regions to stay at home “as much as possible” and limit the activities of some companies for a three-week period extending beyond the Christmas holidays. The San Francisco order will extend into the New Year, at least until January 4.

Under Mr. Newsom’s orders, retailers and malls will be limited to 20 percent of their capacity, and restaurants will only be allowed to offer food for delivery or pick-up. 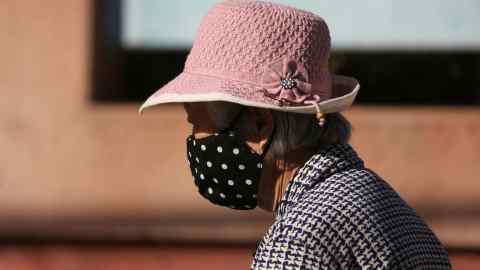 Joe Manchin, Democratic Senator from Virginia, accused Mr Trump of shedding light on the pandemic for political purposes, telling NBC News on Sunday that he was “afraid of dying” from models indicating the US epidemic could double in size. ‘by April.

Health and Human Services Secretary Alex Azar said 40 million doses of the vaccine could be released by the end of the year, pending emergency approval from an advisory group to the FDA next week.

“What we have said is that within 24 hours of FDA green lighting with authorization, we will ship to all of the states and territories we work with. And within hours, they can get vaccinated, ”he told Fox News on Sunday.

But even White House health experts warn vaccines will come too late to alleviate the current outbreak. Robert Redfield, director of the Centers of Disease Control and Prevention, warned last week that 250,000 more people could die by January as millions of people did not follow guidelines to avoid travel and large gatherings during celebrations of Thanksgiving last month.