When the Italian government commissioned its Covid-19 stimulus package from a panel of experts led by former Vodafone chief Vittorio Colao last spring, companies were confident they would play a leading role in shaping an investment strategy that would help restore prosperity.

Their hopes were quickly dashed in the face of the country’s notorious political instability.

Italy is expected to be the biggest beneficiary of the EU’s Covid-19 stimulus fund, receiving 28 percent of a total of € 750 billion in grants and loans over the next six years. Mr Colao’s detailed 53-page plan for spending them, outlining 100 investment proposals broken down by complexity, timing and financing needs, was presented in June. But he was immediately sidelined by political wrangling.

Colao’s plan was good, that’s why I knew it would end up in a dusty drawer

“[Mr] Colao’s plan was good, which is why I knew it would end up in a dusty drawer, ”said Valerio Andreoli Bonazzi, CEO of renewable energy company Hydrowatt.

According to the government’s plan, Italy will receive € 81 billion in grants and € 127 billion in loans from the EU’s Covid-19 recovery fund, plus an additional € 20 billion from cohesion funds. It identifies digitization, energy transition, health, infrastructure, education and social equality as priorities. Investments would be targeted in offshore wind power, floating solar power, the expansion of high-speed trains across the country, internet upgrades and the renovation of school and hospital infrastructure, which on average have 70 years.

But many business leaders, expressing concern through Confindustria, the Italian industry lobby group, say the draft plan lacks crucial reforms or details on governance and procedure. The unions complained that they were excluded from the discussions.

“The outline of the plan is completely disconnected from reality [for small and medium enterprises] and, as entrepreneurs, we are appalled by what is happening because we have never been involved, ”said Andreoli.

“Many futuristic energy infrastructure projects will never be green lighted due to the various environmental restrictions and other permit requirements,” he said.

“We see our clearance requests rejected on a daily basis, we struggle with every € 1million project, imagine what will happen with billions at stake.”

Angelica Donati, chief executive of the Donati construction group, said that while the project was a substantial improvement over an initial version, bureaucracy was likely to hamper investment.

“It takes an average of 15 years to complete a large infrastructure [project] in Italy and none of the [recent] emergency legislation to simplify tendering rules and administrative procedures has improved the situation, ”she said.

Ms Donati also said that many of the projects indicated in the draft plan, including several high-speed rail links, had already been approved and funded but were never carried out due to bureaucratic hurdles.

Italy has always found it difficult to spend European funds. In 2019, it only absorbed 30% of the structural funding it received.

Marco Tronchetti Provera, CEO of Pirelli, said the dialogue between different stakeholders needs to improve. But he was convinced that the conditions attached to EU funding would force Italy to devise a comprehensive strategy. “We are nearing the moment of truth, we need a plan within the parameters of the EU’s rigorous investment and reform parameters and we need to indicate exactly how to get there,” he said. 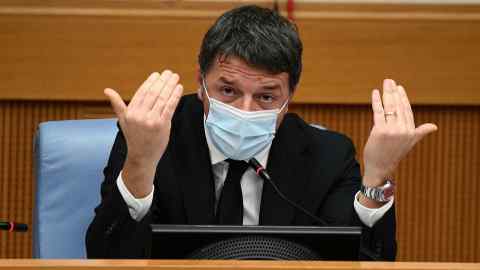 Some officials have blamed decades of privatization for the lack of vital technical expertise within ministries, which are struggling to craft a plan that meets EU and business expectations.

According to Assoconsult, which represents Italian management consulting firms, the public sector’s skills gap meant that consultants could raise around 4% of EU funds. “Management consulting firms deal with the daily execution, monitoring and audit activities of projects. . . we could play a central role in the successful implementation of the different projects ”, said Marco Valerio Morelli, Managing Director of Mercer Italia and President of Assoconsult.

“There has to be a centralized control room, the government has to designate someone who will serve as the program manager and people to oversee the processes in the different sectors,” he said.

According to the first draft of the Covid-19 recovery plan, Mr. Conte intended to entrust the management of the plan to a working group made up of CEOs and business leaders. But the idea was rejected by other members of the coalition and taken from the latest draft, which gives no details on who will be in charge of the implementation.

“Who will be in government is indifferent, what will make the difference is the government’s commitment to engage with businesses and implement the reforms that have hampered the Italian economy for years,” said Mr. Tronchetti. “Otherwise, we don’t get the money – and that’s not a suggestion, it’s a fact.”