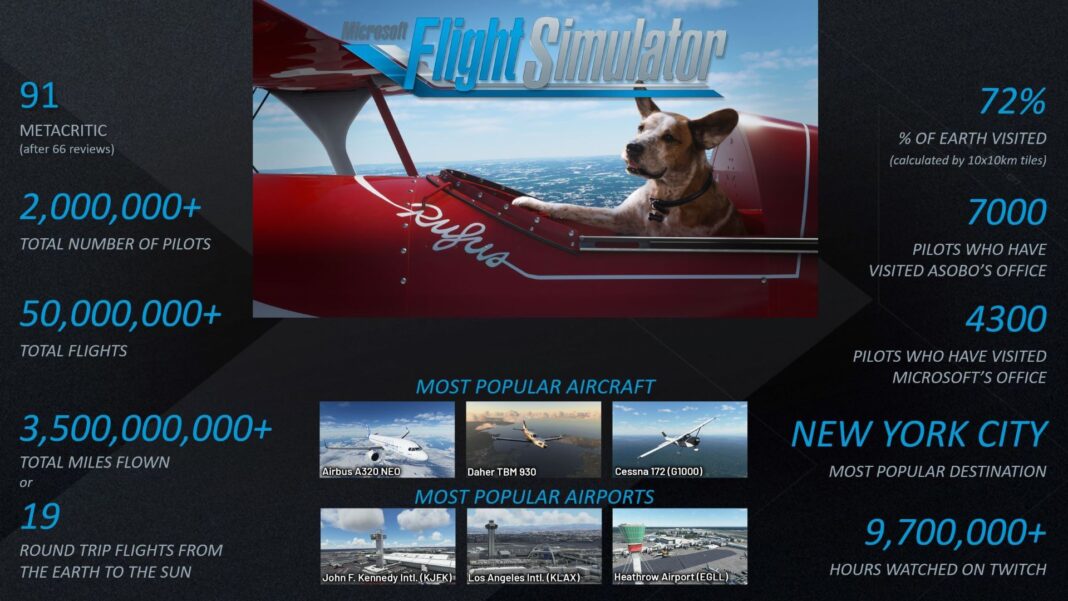 Microsoft Flight Simulator is Microsoft’s oldest franchise with a 38-year history, and we’re proud to announce that the latest entry is the the fastest to reach over 2 million pilots. This has been possible thanks to the incredible community of fans, real-world pilots, flight enthusiasts and virtual travelers who have embraced the new simulation since its arrival on August 18 and made it the biggest game launch of the history of Xbox Game Pass for PC. On behalf of the whole team, a huge thank you to all the fans who took flight and explore our world while discovering the magic of flight with us.

The community piloted more than 50 million flights and have connected more than 3.5 billion miles traveled to date – the equivalent of a flight 19 times round trip from Earth to the Sun, or around the world more than 400 thousand times. It was humbling to see the positive reactions to Microsoft Flight Simulator and we feel incredibly lucky and blessed to have such an engaged community that continually helps us improve the simulation through their continuous and insightful feedback. We’re also very motivated by the community of creators who have already adopted our SDK and developed over 500 airports, airplanes, and other add-ons in the first few months of launch. The quality of the work, the knowledge and the passion of the creators are an inspiration for our team on a daily basis.

Looking back, December has already been an amazing month. It was great fun being a part of Microsoft Holiday Commercial 2020 in which Microsoft Flight Simulator helped Rufus and Sam fly over the sunny skies of snowy Pittsburgh!

Winning “Best Sim / Strategy 2020” at the Game Awards last week was such an honor, too. The team is extremely proud to have been able to follow the rich history of the previous ones. Microsoft Flight Simulator titles that have received such accolades, and we feel honored to be selected from the incredible group of games that have been nominated for this award. The evening ended perfectly because we announced that Microsoft Flight Simulator arrives on Xbox Series X | S in the summer of 2021. The trailer, which was captured in real time on Xbox Series X, already gives a glimpse of how the simulation will look amazing when it comes to console in a few months.

As a thank you to all of you – die-hard slow cookers and newcomers to flight simulation – we’re happy to announce that we’re up to some surprises alongside the VR update that launches on December 22. Microsoft Flight Simulator-themed livery for the entire fleet of launchers and slow cookers will be able to fly with the same cute dog-themed liveries that Rufus and Sam stole in their Pitts Special. Finally, considering the time of year, the update will add real-time snow and realistic ice cover to the entire planet.

As we’ve said time and time again, our launch in 2020 was just the start of our journey with Microsoft Flight Simulator. We’re excited to continue this momentum through 2021 – we’ll launch on Xbox Series X | S this summer we are planning 3 big simulation updates and we will be updating the world 4-5 times with additional global updates (also like a few other surprises we have planned).

Thank you very much for all your support and see you soon in heaven! Happy holidays from the Microsoft Flight Simulator team. Let it snow!